Volunteer firefighters drove a fire truck from Argentina to New York in 1959, 17,000 miles, with a 1925 Brockway, to trade it in, and did the entire trip with only $650.00 between them for expenses on this trip, getting a lot of help from other fire departments along the way 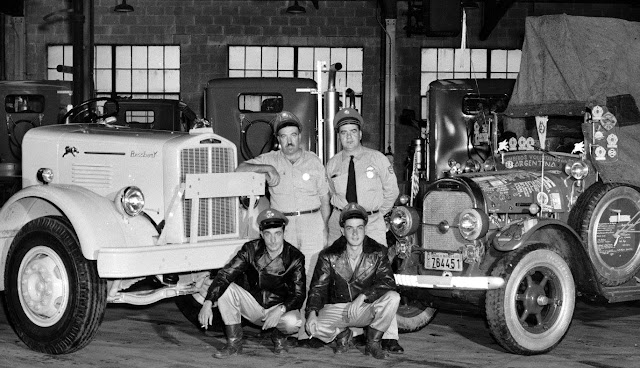 they didn’t bring any replacement parts with them and throughout the trip their axles broke, both front and rear, several times. They also wore out two clutches.

Taking 15 months instead of the four they had planned, the bomberos chugged into Cortland dead broke but undaunted, at a feeble 5 mph. The truck had signs from every state from Texas to New York. They also had plaques on it from volunteer fire truck companies.

Because they were traversing the mountains on the border between Argentina and Chile [the Andes Mountains] you have these giant mountains and some of their axles actually broke and fell down thousand foot gorges so they had to go down to the rivers to find their axles because they didn’t have replacement parts. When they actually found the parts and they hoisted them back up to the roads they had to get them welded back together. So this process that they thought would take a couple months actually took almost two years.

They couldn’t go any faster than five miles an hour especially around the hairpin turns and stuff on the roads. Sometimes they had to make their own roads and clear debris and stuff. They put some stress on the truck and again they didn’t have any replacement parts and they really wanted a new one so it was they either left it there or they go and try to find the parts to get it fixed.

Brockway employees told them that they could’ve just shipped this, why did you take all this time to bring it up here? But they saw their dedication and they had a giant parade and then they actually gave them a brand new firetruck free of charge and shipped it for them back to Buenos Aires, Argentina.

As these guys were travelling, they would stop at local fire stations and rest up. At these fire stations, they would get donated food, places to sleep, and the guys would tell them what they were doing. The people at the fire stations thought it was really interesting and cool and they would sign their truck and that’s why all the writing is there - because of all the places they stopped at along their journey.

The brave four men who took on this journey of survival and endurance were Sergeant Leonardo Antico, a chauffeur and ranking officer of the group, Felix DiMango, a building engineer, Pedro Centrone, a locksmith, and Alberto Bonillo, a butcher. The only thing that these four men had in common was that they were all Argentine volunteer firemen (Bomberos) and they had an overwhelming respect and love for their 1925 Brockway truck. 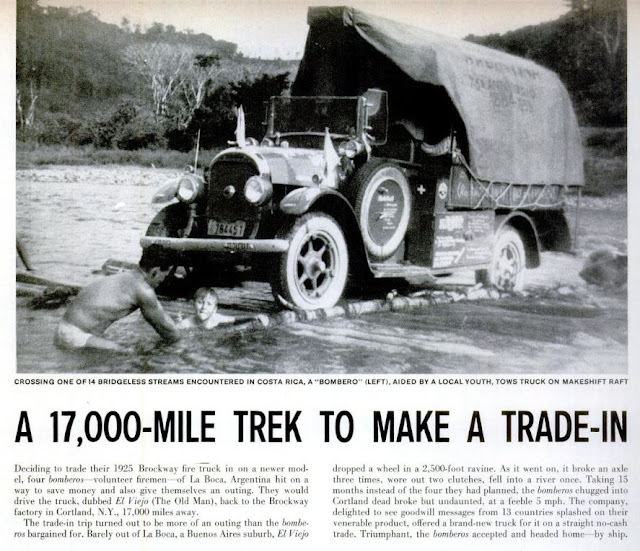 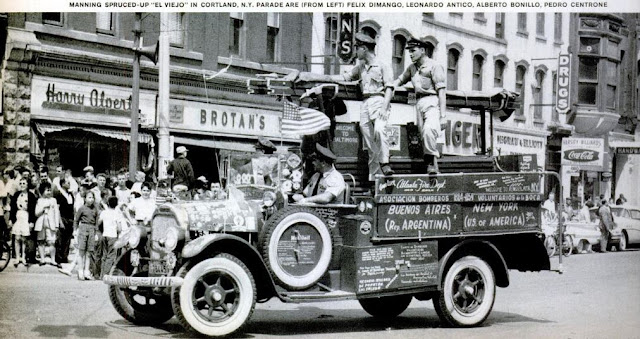 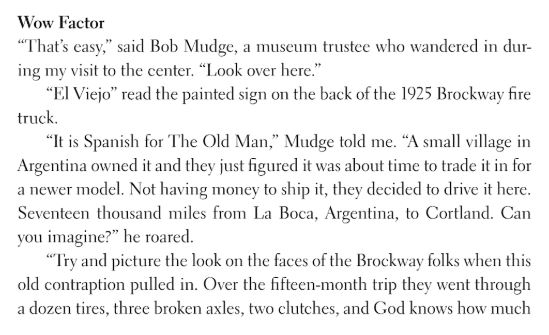 there should be a movie about this truck that’s how cool this adventure was. 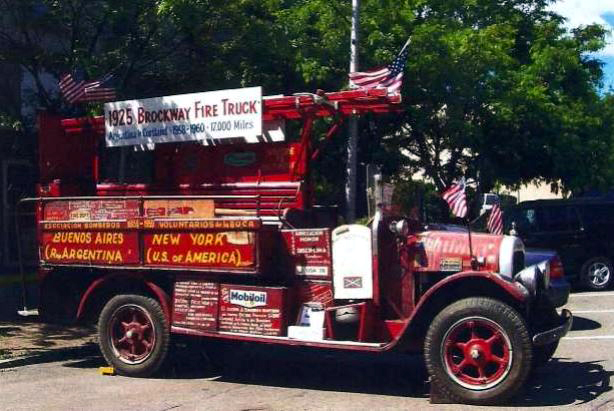 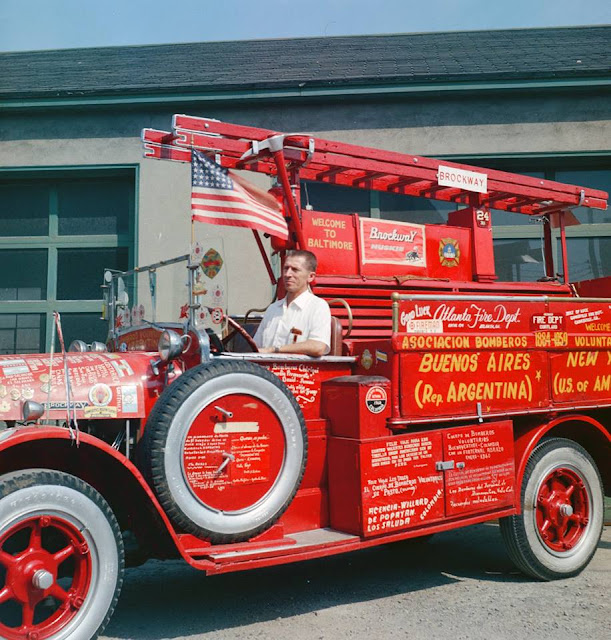 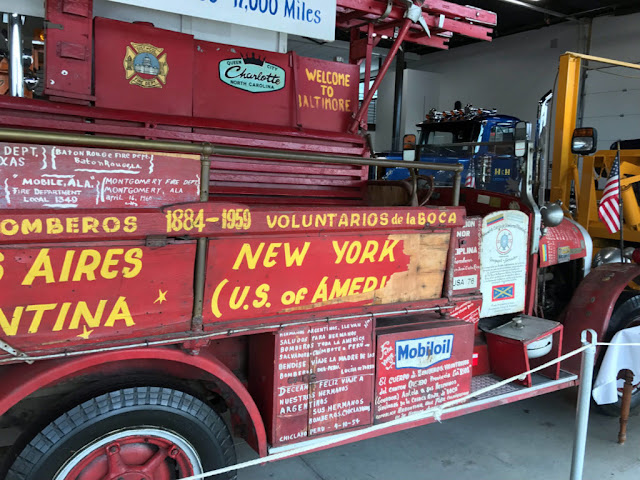 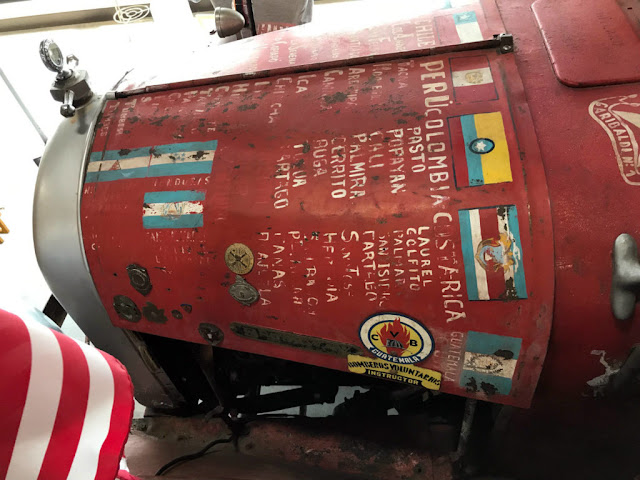 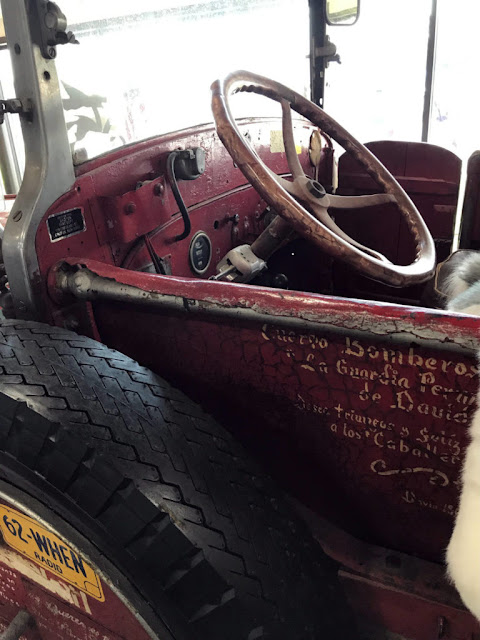 Today, that 1925 Brockway fire engine with the crazy, customized body sits proudly in the Brockway Truck Museum covered with tributes and messages from its journey

street art in homage to the La Boca Volunteer Firemen 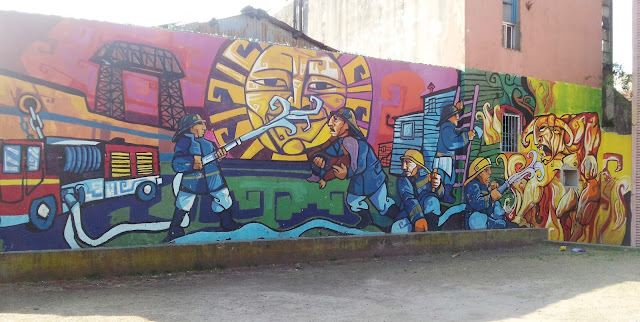 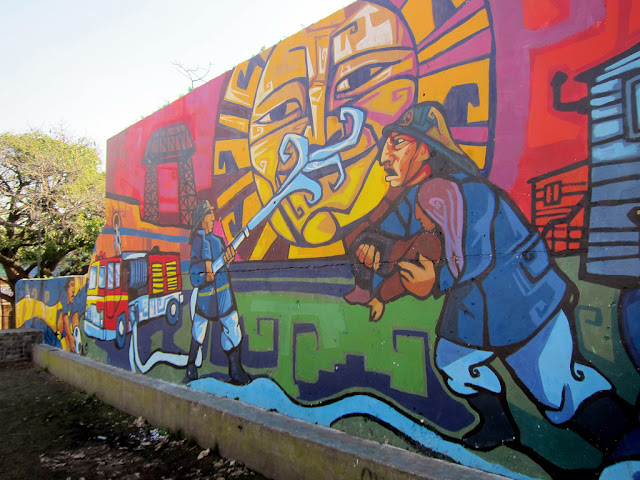 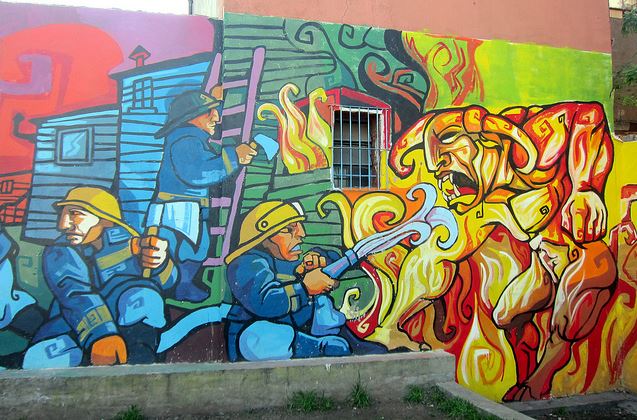 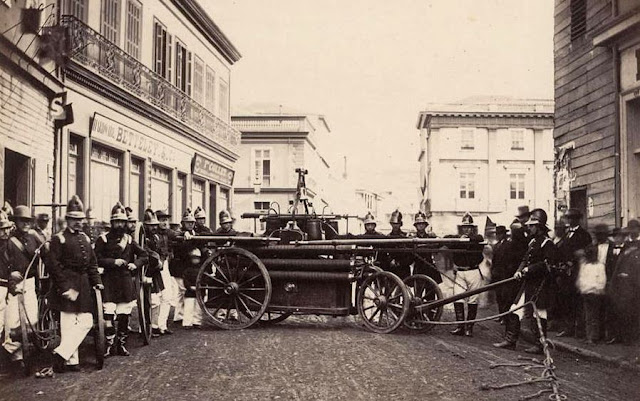 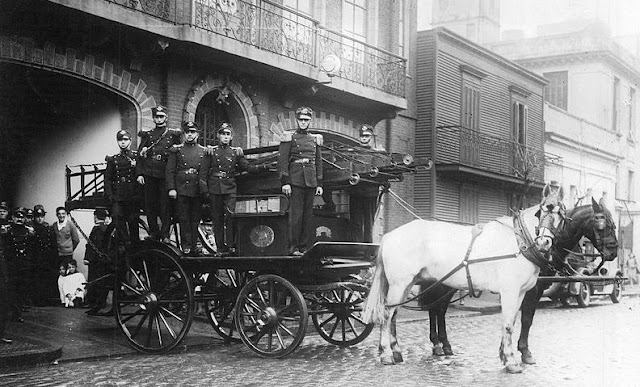 During the first presidency of Julio Argentino Roca (1880-1886), Argentina was then a vast unpopulated territory, circumstance that would motivate the political authorities to encourage the flow of immigrants. From that moment, the influx of immigrants from all over the European continent, mainly from the Latin South, grew to the rhythm of the economy and was transforming the social life of the country.

Many of the foreigners that arrived to our coasts settled in the current Autonomous City of Buenos Aires. The neighborhood of La Boca del Riachuelo, like so many others, began to receive the flow of these immigrants, mainly of Italian origin. 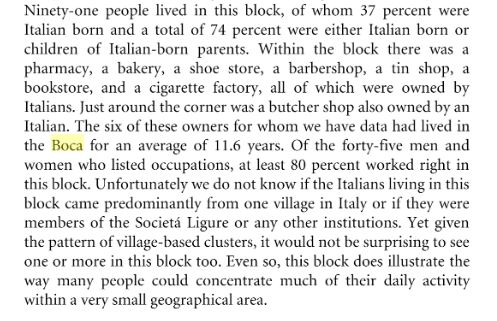 In this context of rapid urban population growth, the first volunteer firefighters organizations would appear on the streets of Buenos Aires, made up of citizens willing to collaborate as a gesture of social solidarity.

A fire produced in the first months of the year 1884, precisely in a house in the neighborhood of La Boca, took the neighbor Tomás Liberti to take the first steps towards the formation of a society whose main purpose was the maintenance of a firefighters association. In those times, the constructions of the city were conformed in their majority by flammable materials, which constituted a continuous and serious danger for the population.

Moved by this episode, Liberti circulated an invitation, written in Italian, that read: « Citizens: a spark could develop a voracious fire that would reduce to ashes our wooden rooms. We need a Fire Society that saves our assets and our families in times of danger. For this reason we invite you to the meeting that will take place on Sunday at 3 pm at the Iris Athenaeum. Fellow citizens! The idea initiated by few needs all of you and your valid support, and we will have the pride of having constituted a philanthropic Association. On Sunday then, at the Athenaeum Iris, let no one be missing ».

In 1884, before the frequent fires of the conventillos, the neighborhood witnessed the creation of the first barracks for volunteer firefighters in the country, an entity that was called the Italian Association of Voluntary Relief Firefighters of La Boca, located on Brandsen Street.

Once the company was established under the presidency of Liberti, a subscription was made to raise funds and the first social headquarters was established in the La Boca neighborhood. This first volunteer fire department received its baptism of fire on November 14, 1885 in a fire that broke out in a candle factory. A short time later, they would collaborate effectively with the police fire department in the great fire of the fiscal customs warehouses of "Las Catalinas", in March of 1886.

From that moment and in a progressive manner, different volunteer firefighters societies were formed throughout the Argentine territory, making the need to increase the articulation and coordination levels between the different existing organizations and those that already exist.