Smokey Yunick once went to Daytona with a Chevelle, with the fenders covering the rear wheels. It gave him quite an aerodynamic advantage, but was going to make tire changing during the race a real problem.

Other owners complained, but Smokey pointed out that the rulebook said he could cut out the fenders if he wanted to, and he said that he didn't want to.

Smokey pointed out that the rule books said he could cut them out, but didn't say when he had to.......

I belive it was the 67 or 68 Daytona 500 when Smokey Yunick entered a perfect 7/8ths scale Chevelle.

The car was lowered to the point that the tires were tucked up inside the wheel wells almost rubbing the sheet metal. The other teams ran with large cut-outs to clear the tires.

The teams all protested and NASCAR said there was nothing in the rule books saying the tires couldn't be tucked inside the fenders.

Smokeys car went out and easily won poll position. No other team could beat it during qualifying.

Prior to start of the race Smokey took a sawzall and cut the wheel openings to clear all the tires.

Again the other teams protested.

NASCAR said there's nothing in the rules that say he can't do that.

It was because of Smokeys 7/8ths Chevelle that NASCAR now uses templates to check body size and shape and wheel openings.

The great cars the Edelbrock family has, and race

The quintessential Yunick story has been retold so many times, and exaggerated so much in the telling, that today it’s almost unbelievable. The facts, if they can still be determined, are that Yunick showed up with a Chevelle at Daytona in 1967 for Curtis Turner to drive.

Turner won the pole, and the big manufacturers blew a gasket–a lone privateer wasn’t supposed to show up the factory teams like that.

The car blew up on the second lap of the race, avoiding further controversy, but when Yunick brought the car to the summer Daytona race, NASCAR inspectors, determined not to let their primary manufacturers be embarrassed again, gave Yunick a list of eleven mechanical items that had to be fixed before qualifying–which started in ninety minutes.

They removed the gas tank from the car, claiming that its non-exploding design was non-conforming. Yunick in exasperation told them, “Make that twelve items,” hopped into his tankless Chevy, and drove it back to its garage stall as the red-faced inspectors gaped.

The rulebook didn’t specify what kind of fuel lines the car could run, so Yunick had threaded eleven feet of 2" tubing through the frame, allowing it to hold almost a gallon of additional gas.

Within a week, the rulebook had been changed to allow only 5/8" tubing of a short length.

From http://www.gordonline.com/commish/020105.html and probably a dozen other sources.

From http://www.smokeyyunick.com/PressReleases/Reviews.pdf is a bit Smokey said after Earnhardt's death:
Yunick writes: “Moveable walls, concrete tracks, fueling by computer, air jacks ’stead of the 30 pound flying sledge hammers they use, mandatory retirement age, etc. When the hell they gonna get to doing something? Maybe after next ace gets killed? When they gonna get rid of the [deleted] restrictor plates and go to smaller engines? Don’t give me the [deleted] answer you can get killed in bathtub. It’s this simple: whoever’s running NASCAR has got his head up his [deleted].”

For more about Smokey: http://justacarguy.blogspot.com/2008/11/great-racing-photos-and-warbirds-and.html
at Tuesday, December 19, 2006 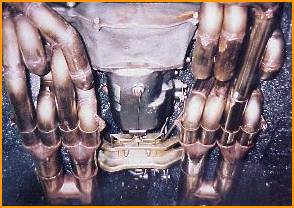 Some of the fine artwork that Smokey performed on this 180 mph beast...

He took the starter, reversed the direction it pointed, reversed it's spinning direction, and mounted it next to the oil pan.... just to make room for the exhaust 4 into 2 into 1 hand welded collectors.

He took a wrong side / passenger side Australian steering box, and installed it in order to make room for exhaust on the opposite side from the starter mod I just mentioned.

For a better description of the tricks I just mentioned
http://www.trans-amseries.com/Drivers/RossMyers69Mustang.htm

Now the conflicting info about this car is that one website says Vic Edelbrock owns and races it. Pictured here: http://www.trans-amseries.com/Drivers/VicEdelbrockMustang.htm is the formerly Follmer Boss 302. So, what's that about?

The engine had never been apart, and the last owner couldn't figure why is ran like a turd, or was so noisy. The passenger side exhaust manifold broke in two. Sweet car.
at Sunday, December 17, 2006

Remember the 55 Chev in "American Graffitti"?

It isn't around anymore, unlike Milner's 32 duece, that resides here in San Diego. It went on to star in "Two Lane Blacktop", was modified, and destroyed during filming... http://blog.cardomain.com/blog/2008/04/55-chevy-from-t.html#more has a full write up
at Sunday, December 17, 2006 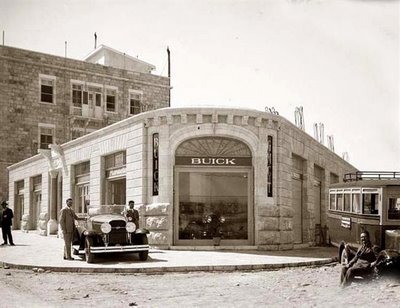 Giugiaro Mustang concept. Better quality photos than the other post I did 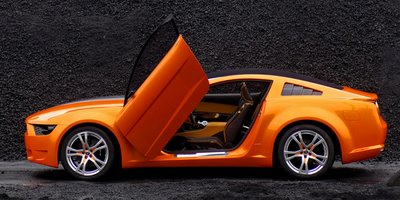 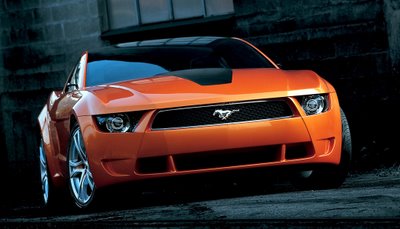 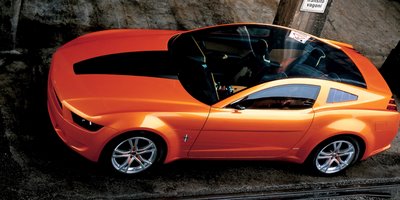 Holman Moody on a Shelby 427 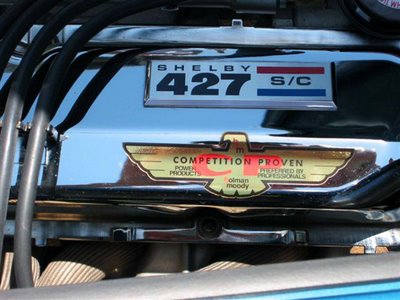