Somedays I wish I had a button that would cause the erasure of idiots, morons, the the imbeciles that are offended at simple ordinary random things. I'd hit that damn button through the desk top right now 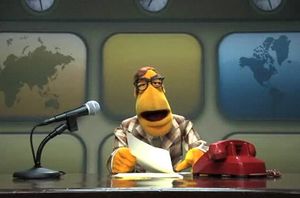 Kawamoto then wrote several letters to Kansas officials and the Gov "I let them know it is considered a very derogatory racial slur and I don't think it should be allowed anywhere," Kawamoto said.

So, Kawamoto brought up this deadly offence issue that he could tolerate no more... you know, license plate lettering, to the newspaper of the Japanese American Citizens League which only has 4 members in the entire state of Kansas, https://www.pacificcitizen.org/license-to-ill-442-jap-plate-drives-jacler-nuts/  whose tone indicates that they think Kawamoto needs his head examined by a good psychiatrist, and which was read by one cranky 67 year old Barbara Johnson living in Abilene, the other 3 JACL members haven't yet lost their minds. The 2,912,999 other people in Kansas? Don't give a shit about these 730 other plates with JAP on them either.

The article title that JACL used? "Licensed to ill".

She was also outraged, mortified, offended, and would stand this abuse no longer!!!!  After all, 70 god damn years ago she was called a jap, and now, 70 years later, a license plate that a guy in California had been offended by, had now been the dambusting juggernaut that released 7 decades old forgotten tears of a woman a thousand miles away from the eye scorchingly offensive 3 letters.

And by all that exists on this earthly plane, it was all she could do to not just die on the spot.

When she "saw the story in the Pacific Citizen, she said it brought back memories of her childhood.

"It was not a good time to be Japanese because of Pearl Harbor and World War II," Johnson said. "I recall vividly as a child being called 'Jap' — and how it made me feel so small and hurt by being called that."

Johnson conceded that Kansas officials probably didn't know "what it means anymore because it was World War II, a couple of generations ago.”

Duh. The fact that the people of the country of Japan/Nippon were as a race, believing that their leader was an emperor, and a god, and must destroy the people and military of the USA, well, that's fine. Bombing of Pearl Harbor? Not mentioned. Rape of Nanking? Nope she's never heard of it.

But these 3 letters can be tolerated to exist no more, because?

At least one of their ancestors was from the country that known as Nihon to the people that live there, and is spelled in their language にっぽん. How the hell these people are retarded enough to be offended by the letters J and A and P on a damn automatically sequentialized automobile license plate on the bumper of a vehicle in another language is still not apparent to anyone with an IQ over 80, nor is why anyone in the Kansas DMV gave any attention to the complaints about the letters JAP when they can't take action on complaints about potholes. This bullshit they take serious?

Hiragana: にっぽん is a reading of kanji 日本 that refers to Japan. Nippon is more formal, patriotic, and rarer than Nihon にほん

And if you didn't know it, that is why the Americans during WW2 used the ethnic slur "Nips" when trash talking the Japanese. What do the people of Nippon get called? Nipponese. Nips is the abbreviated word. Bugs bunny even had a cartoon named "Nip the Nips"

About 731 license plates in Kansas have the 3 letters sequentially and and without malice, assigned to the plates, as a matter of producing license plates by machinery. After complaints by people like Barbara Johnson, who need something to bitch about and feel victimized by, the state is recalling the license plates so that these people will shut the fuck up.

These plates are standard letter combinations that are randomly given out, not personalizes plates.

A letter was sent to the owners asking them to trade their plates in at the county clerk for a new plate within 30 days, or they will receive a new one at their renewal date.

Next, expect that the questionnaire section with "race" to be changed as "white" and "black" people decide that a color does not mean a human designation regarding the ancestry from a geographic region and genetic markers.

meanwhile, in other news, slavery still exists in the middle east, girls of muslims still are genitally mutilated in Michigan, and not a single person alive in the USA gave a fuck, nor wrote their govt to do a damn thing about a thousand things that matter to the level of human decency around the globe.

But this bullshit about the letter combo's on a license plate offended senior citizens? This is why the word fuck exists.

Here are the first couple paragraphs of that JACL article... they simply are worth reading:

Before he lost the car in traffic, the quick-thinking Kawamoto pulled out his digital camera and snapped a picture of the car with the slur-sporting license plate. Although traffic was slow, his mind was racing. Was it a vanity plate? A twisted tribute to the 442nd Regimental Combat Team? Or worse yet, an intentional slight against Japanese people or, perhaps, Japanese cars?

According to Kawamoto, it would turn out to be none of those. 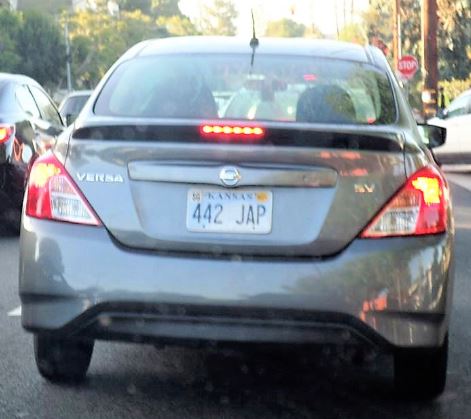 In her correspondence to Kawamoto that he provided to the Pacific Citizen, Lee Ann Phelps, the vehicle services manager at the Kansas Department of Revenue, Division of Vehicles wrote: “We do have a screening process for plates and some combinations that have been pulled from circulation. Use of the specific combination you are concerned with is certainly not intended by the State of Kansas to portray any derogatory intent. The combinations on our standard plates (which this plate is) are a random sequence of letter and numbers and not designed to portray words or abbreviations of words. I would say in this circumstance, this specific plate combination is a coincidence and not intended to degrade any one person or group of persons. I apologize if this plate is offensive to you personally.”

Kawamoto was pleased to have heard back from a state official representing Kansas, but the response still left him unsatisfied. While there was some consolation that the plate was not a vanity plate, Kawamoto found it disconcerting that no one in the system would red flag a plate with “JAP” on it.

The fact that no one realized that the 442 JAP plate was a coincidence, and that no one drew a connection to the highly decorated Japanese American 442nd Regimental Combat Team didn't bother Kawamoto in the least. That some favorable publicity could be generated to remind Americans of the great honor and respect that was earned by the 442nd, never occurred to him either.
https://www.pacificcitizen.org/license-to-ill-442-jap-plate-drives-jacler-nuts/

And did anyone have a coronary over other letters and how they simply aren't a state license plate subversive ethnic slur put on cars so under the radar that no one's been offended yet? Nope. Just these jack asses
at Wednesday, December 05, 2018