Meter maids and police in San Francisco, California are more interested in issuing parking and traffic tickets than attempting to solve the crime of vehicle theft.
Michelle Vuckovich, 37, learned this when her 2000 Honda Civic was stolen on September 26. She filed a police report and ensured it would be listed as stolen on police databases. Within an hour, a meter maid issued the car a ticket on Union Street without noticing that it had just been reported stolen, the San Francisco Chronicle reported.
The handheld computers that meter maids used to issue parking tickets failed to check the stolen car database, as Vuckovich's stolen Honda received a total of twenty-nine citations without any effort on the part of police or the meter maids to track down and recover the vehicle.
Vuckovich called the police immediately after she received the first batch of tickets in the mail. When law enforcement was not interested in helping to find the car, she set out to follow the trail of tickets to locate her car on her own. Vuckovich found it just two blocks from the police station. Officers arriving on the scene an hour later declined to make any attempt to search for evidence to lead them to the thieves responsible.
http://www.sfgate.com/cgi-bin/article.cgi?f=/c/a/2007/12/24/BAS8U31UA.DTL
at Friday, December 28, 2007

Happy Holidays where ever you are, an Airstream Trailer light display of the Trans Siberian Orchestra's "Wizards in Winter" light display

I hope you like this piece of music as much as I do... 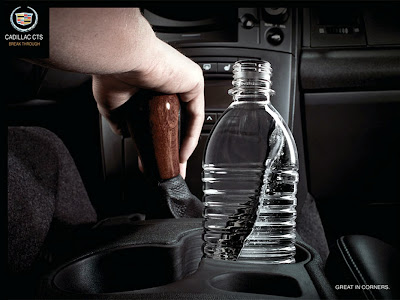 A gallery of steam trucks, buses, and road trains after the link 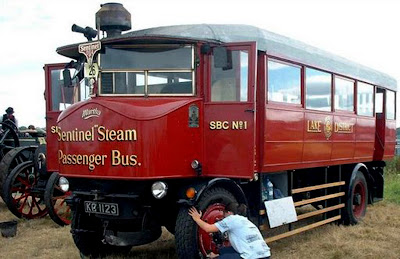 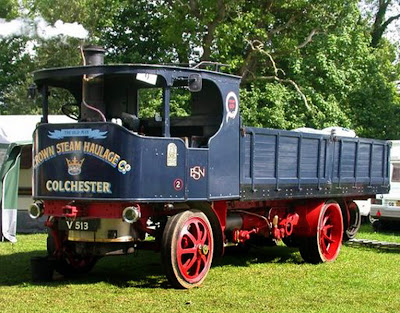 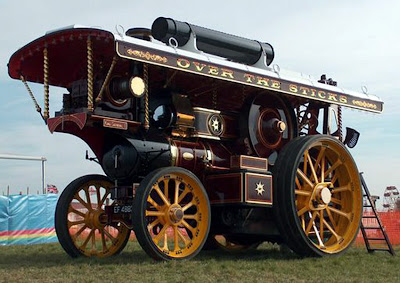 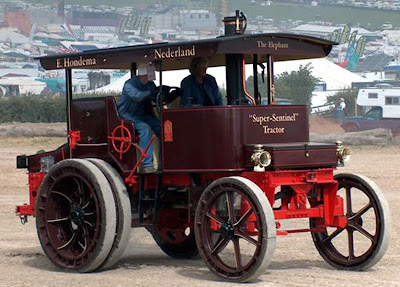 1898-1935 was a trasistion period, and testing time for the different methods of transportation when it wasn't clear what was going to be the winner in the auto wars. This was a time when some still used horses, pedal bikes were getting a lot of sales, motorbikes were really making progress, and yet steam power wasn't out of consideration for some more industrial applications. Tractors were generally huge expensive things that most family farms wouldn't be able to afford unitl the 40's and 50's... and trains were mostly steam until the 50's.
http://www.darkroastedblend.com/2007/12/steam-buses-trucks.html

Video of a Subaru with snow tracks instead of tires

The Muscle Cars Information section details some of the histories and manufacturers of high-performance vehicles such AMC, Dodge, Plymouth, Buick, Pontiac and Chevy.

Classic Muscle Cars are typically defined as high-performance vehicles with powerful engines, most made between 1964 and 1975. Learn about more than 100 of our favorites, including Chevelles, Chargers, Mustangs, Road Runners and GTOs.

Respect to Tadao Kadate of Japan, for he invented the clay bar, cleaner of car paint!

"To this day, Detailing Clay is the only product that takes off stubborn over spray with a single, swipe of the hand."

A website on interior and exterior detailing products, and how to use them.
at Wednesday, December 26, 2007

Off the beaten path for me, good but different than my usual fare

email me at jbohjkl@yahoo.com to comment
at Sunday, December 23, 2007

The development of gasoline, or, how and why it became leaded, extremely poisonous, and finally switched back to unleaded over the protests of GM

In the easiest to understand article I've read about octane, knock, pinging, and in the process the author gives you a understanding of how it was all profit driven over the basic interests of the health of all humankind.

" ...one decisive drawback, however, which was its tendency to cause harmful deposits in human blood, bones, and brains. Lead poisoning had long been known to cause such alarming maladies as spasms, hallucinations, seizures, blindness, kidney failure, brain damage, madness, coma, and death. "

" To manufacture and market their incredible new engine-enhancing additive– which had been dubbed Ethyl– General Motors partnered with Standard Oil and Du Pont to form the Ethyl Gasoline Corporation.

Consumers showed interest, particularly after the Indianapolis 500 motorcar race on Memorial Day 1923, where the first, second, and third-place cars were all fueled by Ethyl gasoline. After that, the fortified fuel enjoyed rapid widespread adoption, and indeed it lived up to its mechanical claims. In a note to Kettering, Midgley estimated that Ethyl would eventually be adopted by at least 20% of the nation's fuel supply, providing an annual gross profit of about $36 million. "

" ... results showed that airborne lead had been negligible before 1923, and that it had climbed precipitously ever since. In 1965, when the tests were conducted, lead levels were roughly 1,000 times higher than they had been in the pre-Ethyl era.

He also compared modern bone samples to that of older human remains, and found that modern humans' lead levels were hundreds of times higher. "

" The Ethyl corporation had powerful friends, including a Supreme Court justice, members of the US Public Health Service, and the mighty American Petroleum Institute. Nevertheless, Patterson was unrelenting, and the resulting rise in scientific and public awareness eventually led to the Clean Air Act of 1970, and a staged phaseout of leaded gasoline.

Ethyl and Du Pont sued the Environmental Protection Agency, claiming that "actual harm" must be demonstrated rather than just "significant risk," an effort which successfully prolonged lead additives' life by another decade.
By 1986, Ethyl and its ilk were virtually eliminated in the United States, and Americans' blood-borne lead levels have since dropped by 78%. "

" Some historians have argued that Midgley's tetra-ethyl lead was a necessary evil; one which hastened the progress of efficient engines, thereby advancing the economy and contributing to victory in World War II.

It is worth noting, however, that in the early years of Ethyl's availability, basic refinery advances boosted the base octane of fuel by 20-30 points, whereas Ethyl additive only boosted it by about nine points.

In retrospect, Ethyl's octane improvements were somewhat overstated, and the product owed most of its success to crafty marketing, misleading research, and chronic government incompetence. Whatever Ethyl's benefits, it saturated the planet with an insidious poison, and the true magnitude of its past, present, and future harm are yet to be known."