Imagine Carroll Shelby handing this out 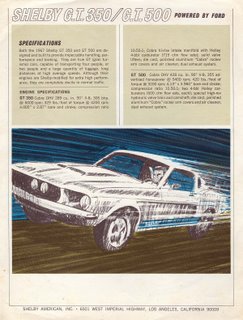 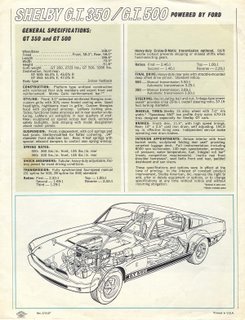 It happened in 1966, at the Winternats. A guy I know let me borrow this original flyer that Carroll handed to him. I think it would be worth thousands to someone who wanted it for their own Shelby Mustang. Imagine how rare it has to be that anyone held onto a flyer for a car they weren't going to buy. Imagine for a moment being a owner of a 1966 Shelby GT 350, and never realizing this flyer existed. Now how geeked do you think I was to be shown, and loaned this flyer, that I wouldn't have bet existed, and getting to scan it in to show everyone else just how early in the Shelby evolution this was, that word of mouth hadn't begun to circulate on this remarkable collaboration between Shelby and Ford. In 1966 the AC Cobra was only a few years in the making, with the 427 just becoming available after the initial years of the 260, and the 289 Cobras. In a world without cable tv, the world wide web, FM rock stations... Carroll was handing out flyers! I think the total production was less than 1400 GT 350's that year. I'll look it up and get some accurate stats and post them later.
at Saturday, November 11, 2006 No comments:

Some ad guys had some great ideas, like this anti GTO recipe card ad. 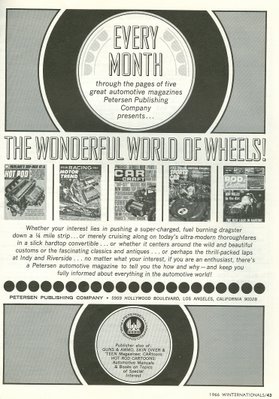 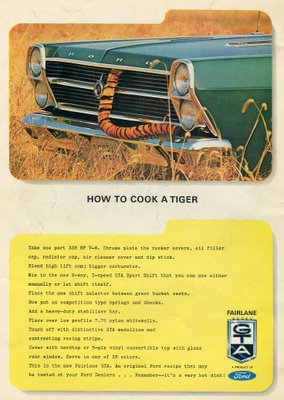 An old advert is like an old muscle car, just time travelling 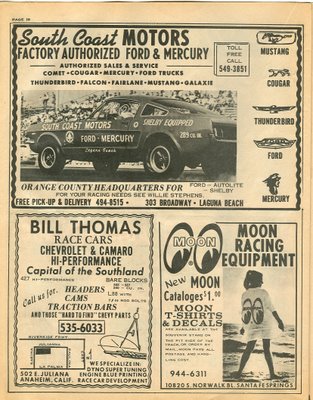 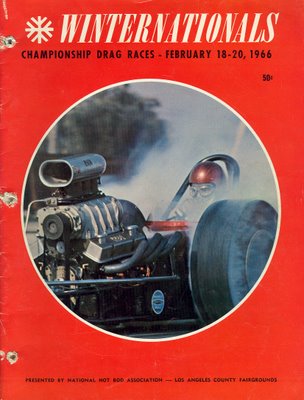 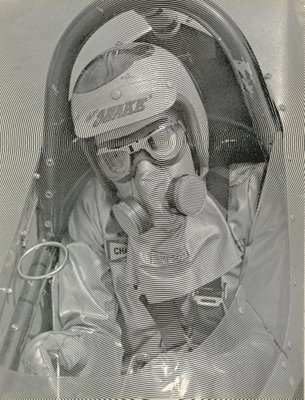 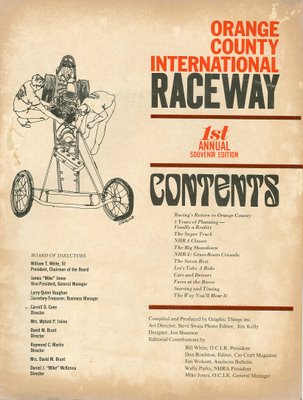 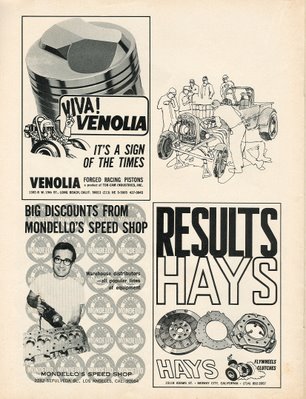 I love old ads, these are from the 1966 Winternats program 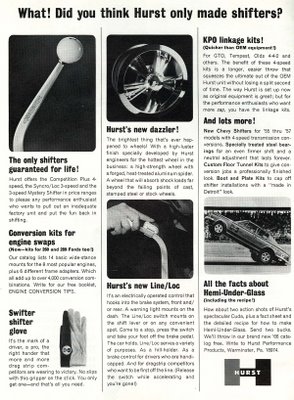 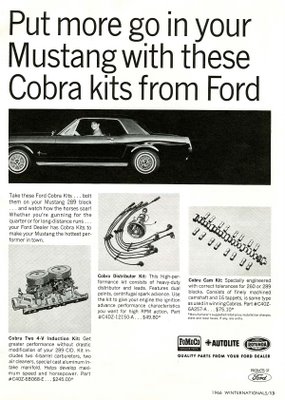 Love these, they just evoke a fundamental car guy impulse to buy new and better parts.
at Saturday, November 11, 2006 No comments:

After some thought, I figure a bit of concept might help, or not, as I'm going to put out a lot of stuff that I've found cool or helpful relating to musclecars... and occasionally the car hobby in general.

A wounded Marine went to the San Diego Speed Fest with me this year, and was keen on the race cars and muscle cars in general, but didn't have any familiarity with most of the race cars, history, or inspirational figures in US auto racing. He was soaking up all I could think of the tell him, but our time was limited to walking through the pits, and what little I could think of off the cuff to fill in why some cars we looked at were special, and who made them that way.

I realized that I have been learning alot since I was about 6, and was first given a blue 69 Corvette Hot Wheels car triggering a admiration for sports cars, musclecars, and hot rods... the learning will never end, and I can pass on a lot of interesting stuff to others. If any one were to ask to look at a magazine I have, I'd pass it over to them, show the pictures, tell the stories, fill them in on my opinion.. that kind of thing. This blog will be the same as if anyone were to stop by my garage and bench race for a while. So all the pics, articles, and info that I can attribute to a source, will be listed as to where I found it... if I know, just like letting anyone look at the stuff I have, and I can't see how that violates any rules about copywrite, etc... so since I have this stuff to share, I have no idea how it can be wrong to let more people see it in a far more technological way that passing around an old copy of Hot Rod, Motor Trend, Cars, Car Craft, Popular Hot Rodding, Hemmings Muscle Cars, Muscle Car Enthusiast, Motor Trend Classic, American Rodder, Muscle Car Review, or any thing else I subscribe to, have subscribed to, or paid for along the way.

I've been reading most of the magazines since I could afford the 9.99 a year subscription, or could find a copy at a library. Some great stuff has been put out once upon a time and never shown up again, but anyone who kept a copy can show you some long forgotten issue that had a cool article, and thats what I'm going to do right here. Some very cool guys that inspire me to learn more about car crafting, upgrading, restoring, and tricks to improve a car will get some ink here. Marlan Davis, Smokey Yunick, Gray Baskerville, Art Arfons, Vic Edelbrock, Mickey Thompson, Carroll Shelby, Enzo Ferrari, Matt King, Fireball Roberts, Harvey Earl, Henry Ford, are just some I can think of off the top. Enjoy.
at Saturday, November 11, 2006 1 comment:

In the beginning, men became fed up with walking.

Then they realized that horses left horseshoes, nails, and piles of manure in the roads

Soon, the marvelous elixir of gasoline was concocted, Firestone discovered the method of vulcanizing rubber.... and the birth of the internal combustion engine happened, roughly about the same time, and Voila! Some smart guy put it all together, and the human race began rolling around with engines powering wagons and the horse became obsolete

The automobile was on it's way to changing human culture, art, and transportation.
at Wednesday, November 08, 2006 2 comments: