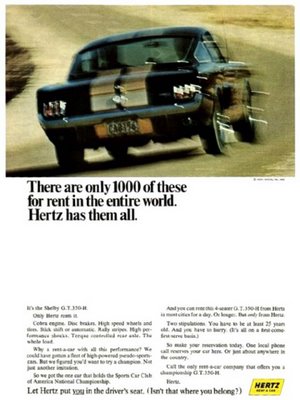 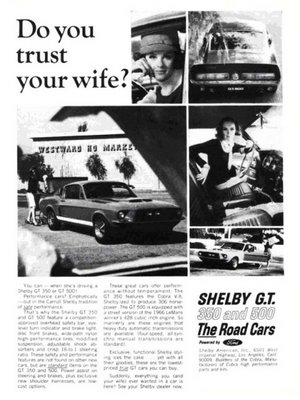 http://de.geocities.com/us_musclecars/cars/mustang/65_mustang_ads_us.html for all the original 60's Shelby mustang ads that guy could find,.... go way in the beginning of this blog for the ones he didn't.
at Thursday, December 14, 2006 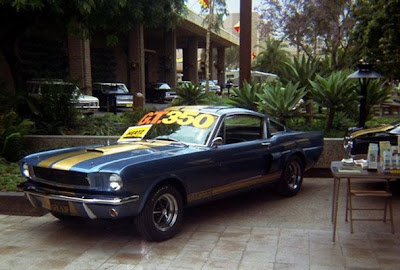 http://dbusso.typepad.com/vintagemotors/vintage_cars/ french old car site, not bad, just need a translator to read.... did I fool 'ya? Hell, I don't read, I just look at these for the pictures!

The Hertz Shelby GT350H was specially prepared for Hertz Rent-A-Car as a publicity move for the benefit of Hertz, Shelby American, and Ford.

Peyton Cramer, a brilliant marketing man, was Shelby's General Manager at this time. He was told to try to get some fleet sales. He called upon Hertz and came back with an order for 936 cars.

The catch was that they had to be painted Hertz colors, black with gold, a paint scheme used on cars made by Hertz in the 1920's, when Hertz was an automaker.

Now what this writer didn't say, or didn't know, is that in the very last months a GT 350H could also be ordered in other colors, but the stripe remained gold. Red, blue are the rare colors, black the remembered one. If you only wanted to know what every one knows.... you wouldn't be looking or reading my blog, we're here for the cool stuff, the one step further and better stuff... that's what makes a car guy different from a car driver.

http://www.vantagesportscars.com/gallery/gallery.cgi?func=show&file=200466&Category=100012&Page=1 for a good picture of the blue,

http://www.qv500.com/shelbygt350p2.php gives the following more accurate info
"All were supplied with Gold sill stripes that read GT350H, many also being kitted out with matching Le Mans centre stripes.

Around 80% were painted Raven Black, the remaining 20% being split primarily between Wimbledon White and Candyapple Red."
at Thursday, December 14, 2006

What does the FE stand for, referring to the Ford engine series?

Email me at jbohjkl@yahoo.com with comments

And click on pictures for full size
at Wednesday, December 13, 2006 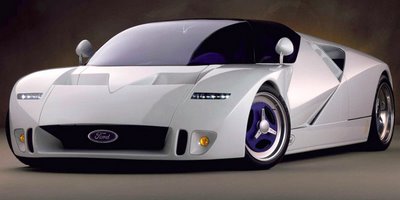 Andrea Zagato decided to create a Lancia Aprilia Sport identical to the car built by his grandfather Ugo in 1938, from two faded monochrome photographs – the only remaining source of accurate information.
at Wednesday, December 13, 2006 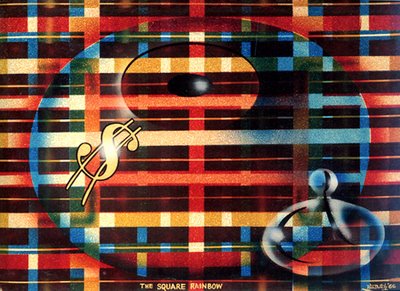 Conceptually genius. "The Square Rainbow"
Notice the round object suggests Von Dutch's signature eyeball, the dollar sign - his disgust of money.
Sold at a price of $34,500 at Auction May 2006 by RM Auctions, as part of the Brucker collection.
24 x 30"

From the plaid emerges a ghosted image of an eyeball along with a small conical shape, which occupies the lower left hand corner of the painting. Painted in the left side of the eye is an unmistakable dollar sign, the presence of which is by all accounts best described by Dutch himself in a conversation with Temma Kramer, the painting meant, “Money is a square person’s idea of what is at the end of the rainbow.”

It is widely thought that Von Dutch placed a piece of cardboard or wood on the wall and whenever he was using the last of the paint in his spray gun he would “tape off” parts of the painting and spray the piece with another color.

http://www.liveauctioneers.com/catalog/9500/page3 will show you a lot of other things he made, and other paintings he did. Others followed, but he broke trail and wrote the book.
at Tuesday, December 12, 2006

These first 5 images are from http://www.arielmotorcycles.com/vond.htm 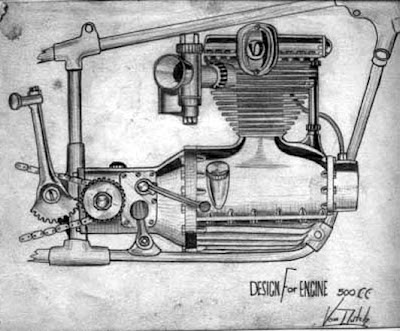 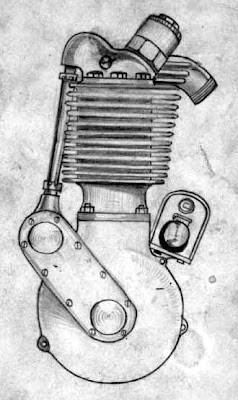 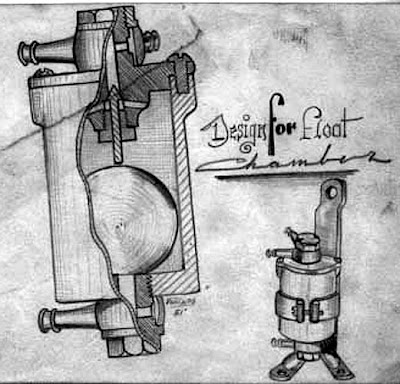 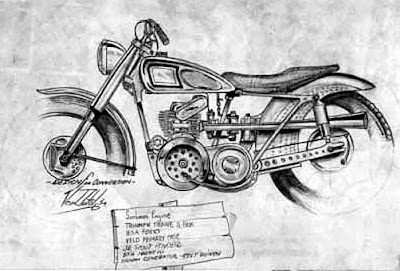 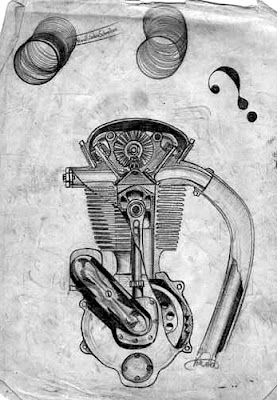 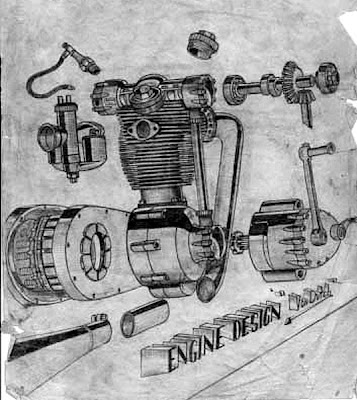 above and below from http://showandgo.blogspot.com/2009/10/von-dutch-engine-designs.html 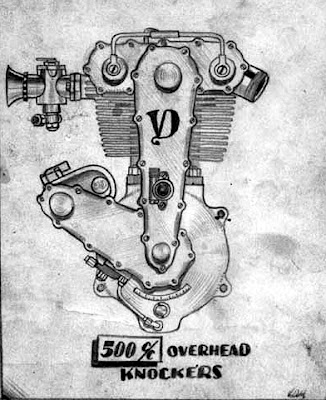 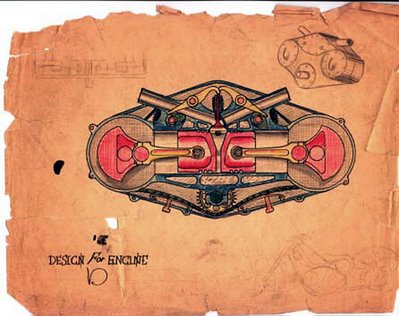 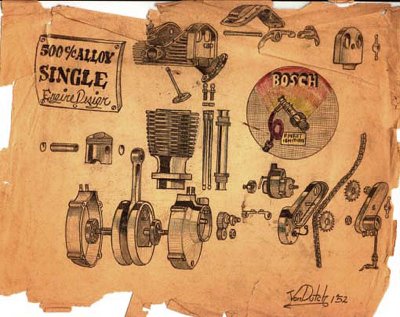 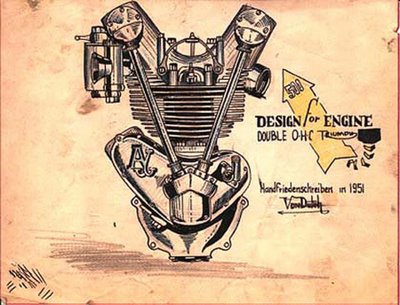 Old car radios had a lot of variety, cool. pt1

Old car radios had a lot of variety, cool. pt 2 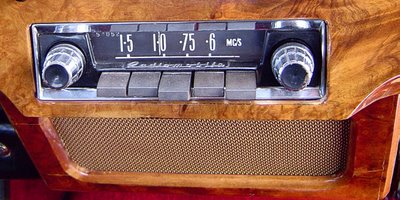 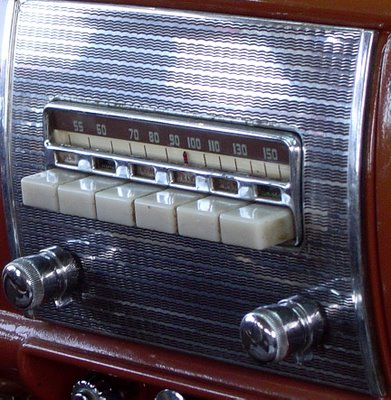 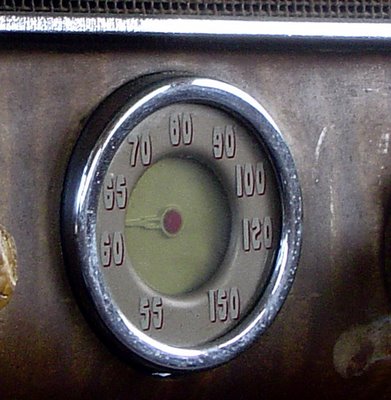 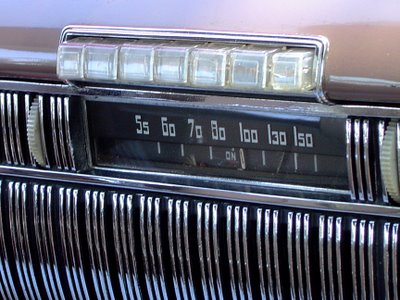 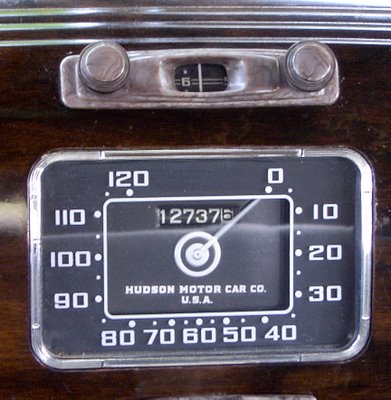 Old car radios had a lot of variety, cool. p3 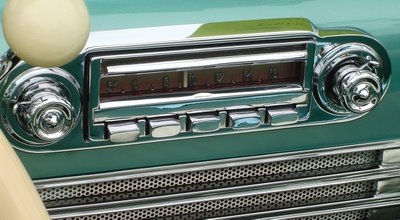 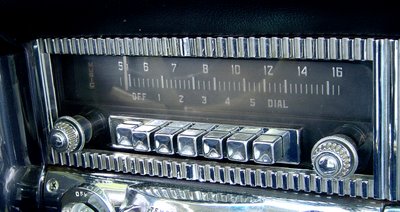 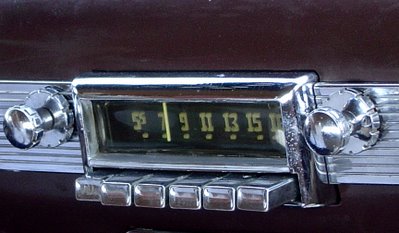 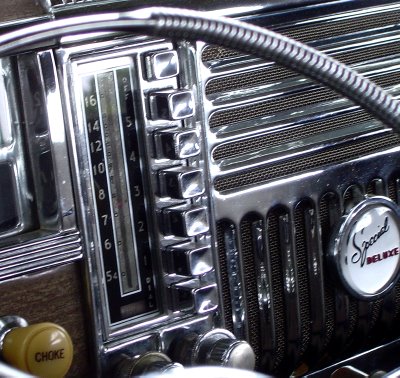 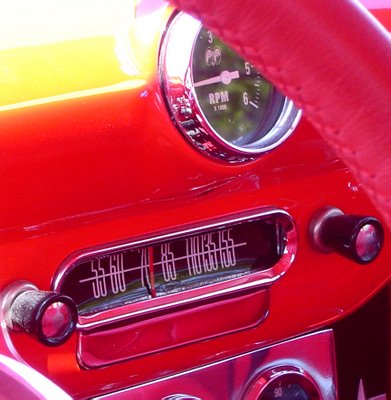 The meanest Cobra ever made. EVER. Carroll's personal 800HP AC Competition Cobra 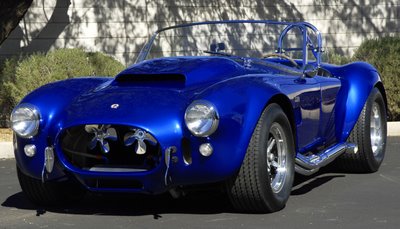 Carroll had an AC Cobra upgraded just the way he wanted it, for his own pleasure. Twin supercharged, dual quad, 427 side oiler. 800 HP.

It's going to auctioned. Some fortunate filthy rich guy is going to plop his butt into the car Carroll told his mechanics to assemble, FOR THE BOSS. I think that merits bold typeface. I think that deserves some thought.

The crew knew when they put it together that it wasn't just for a customer, it was for the racing legend, the car building icon, the man who made saved a car (the AC) and put racing into the blood of Ford. I don't mean left hand turns, I mean RACING THE EFFIN BEST ON THE PLANET! 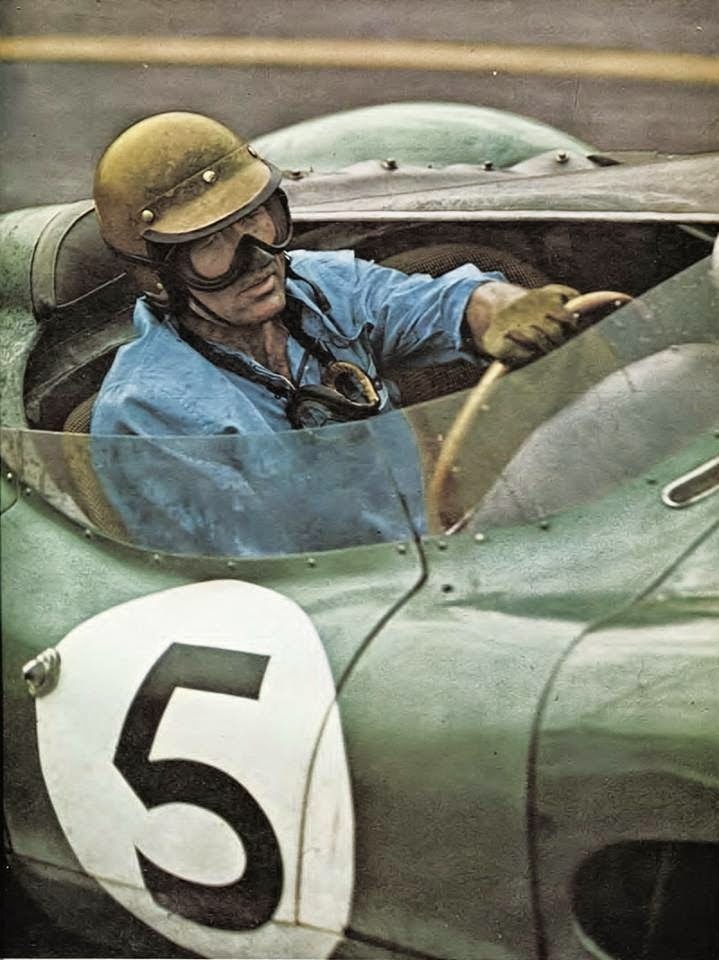 The only American car to ever win the FIA World Manufacturers Championship for GT cars was the Shelby Cobra Daytona Coupe. http://www.petersen.org/default.cfm?DocID=1014&cat=Shelby&ExhibitID=264&index=4 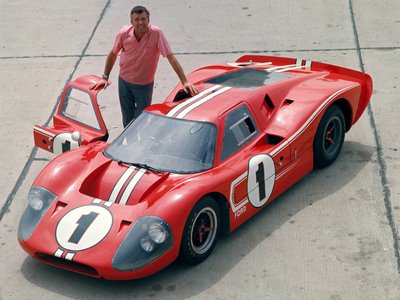 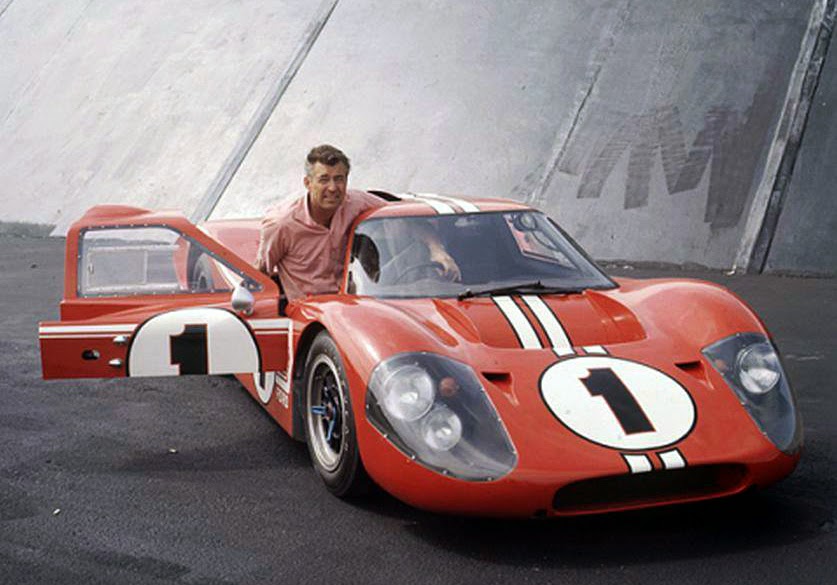 I think this deserves a hell of a lot of respect, he may be the greatest.
Andretti is a great driver, never built a car company.
Richard Petty won lots of races as a driver, never designed a damn car.
John Force and Bob Glidden set lots of drag race records. Nothing in the common car model names.
The Sunoco Camaro is synonymous with Roger Penske.

But Shelby developed the GT 40 from a previous similar design and beat the snot out of Ferrari.

Some great circuit racers like Sterling Moss are known in more countries than than Micheal Jordan or Tiger Woods, and doesn't have his name on a single production car anywhere.
Cale Yarborough has his name on a Talledega, and Mark Donahue has his name across the Javelin, now let's be sure to remember those, and not let them be forgotten. That means something, drivers so good their name sold cars because it was written on them.
Even Dale Earndhart had an Impala SS with his name. I'm sure I don't know of some that also were honored on new Impala SS's, or Monte Carlo SS's. I don't follow new NASCAR, my interest ends in the very early 70's when it comes to NASCAR. I'm sure I'm not the only one. Most either are new, or old NASCAR fans, but not both. Thats an entry for another time... this one is for CARROLL"S PERSONAL FREAKING EPITOMIUS COBRA! Never was another made better, equal, but never better.

Now here are the links for more, http://www.wurthitdesigns.com/cobrastory.htm is the 1981 restoration story photographed by the mechanic who brought it back from some body damage and it was missing all the original cool parts that bolted on, the Shelby dual quad intake, Paxton superchargers, etc.

http://www.barrett-jackson.com/carlist/cardetails.asp?In_AuctionID=221&In_LotNumber=1301 is the Auction site's authenticator's breakdown of how we can be sure this is the real Super Snake Cobra of Carroll's. One of only 23 427 Cobra Competition Roadsters built, different from the AC Cobras sold to the public, later in 67 it was transformed into the Super Snake and reclassified as 427 Cobra Semi-Competition.

I find the description a bit confusing, and doesn't make it clear if this guy denies the legitimacy of the 68 Road and Track article, or just specifies why that car pictured is the real deal. I think he should have had someone read over his notes to check it's clarity. Hell, this car is worth around 15 million, a little extra effort isn't amiss.

http://justacarguy.blogspot.com/2006/11/carroll-shelby-once-had-special-ac.html#links for the Road and Track article I blogged earlier here on this website.
at Monday, December 11, 2006