You've known that Jimi Hendrix died at 27, by choking on his own vomit, but did you know it was murder? His manager, ex MI6 agent, killed him for a 2 million dollar life insurance policy, and to prevent being sent to jail for embezzlement 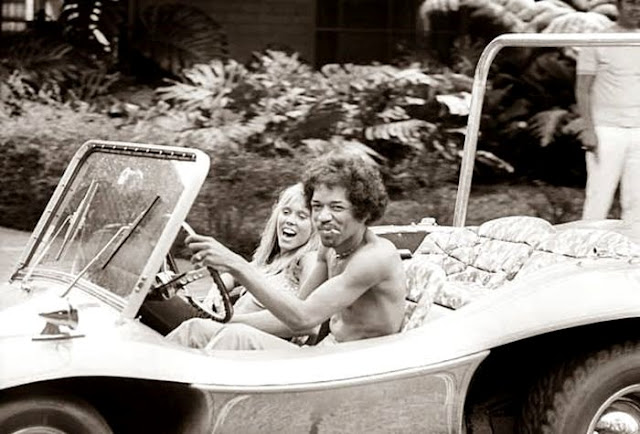 When designer Don Haskin and business partner Max Becker unveiled their new buggy it was already cloned by Marion Ruggles as the Ocelot who got his copy in the same magazine issue (Hot VW's and Dune Buggies-August 69') and took credit for the design.

This made designer Don Haskin so mad he took the bodies off the market and started a rental car company in resort areas such as Hawaii, Florida, Jamaica and Puerto Rico becoming the 7th. largest carmaker in the U.S. with over 500 turn-key cars produced in 1969.

The buggies were a part of the Hawaiian scene in 69 thru early seventies.

50 customized Bushwhacker dune buggies, painted light blue and gold with big rainbow stickers on the top and sides were built for the Hilton Hotels and were used in the movie "Rainbow Bridge" 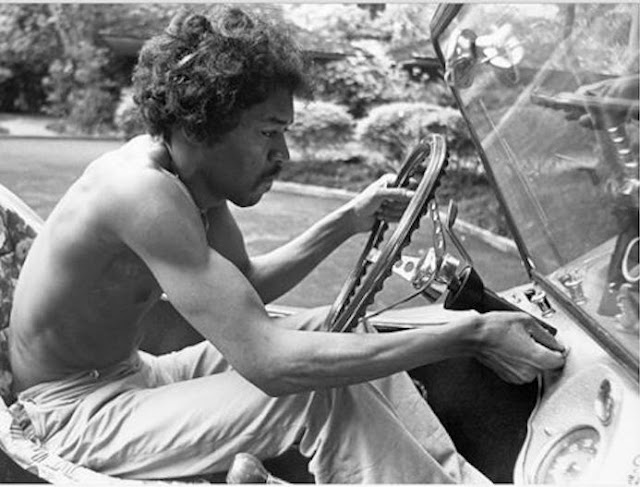 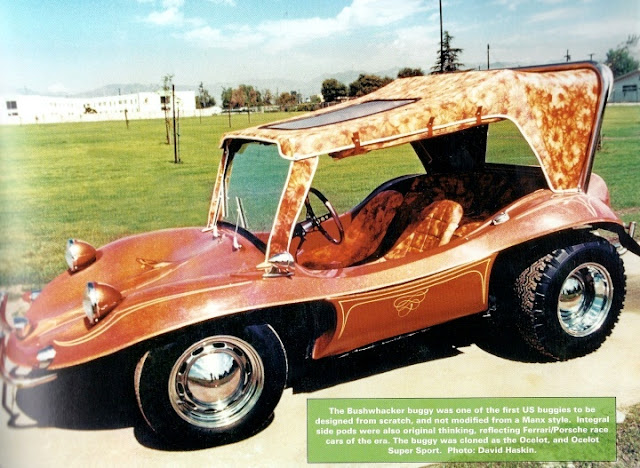 The Bushwhacker buggies were used by the Hilton hotel group as a fun rental car for hotel guests in Hawaii, Puerto Rico, Jamaica and Miami. Jimi Hendrix cruises in a Bushwhacker Buggy in his movie "Rainbow Bridge". 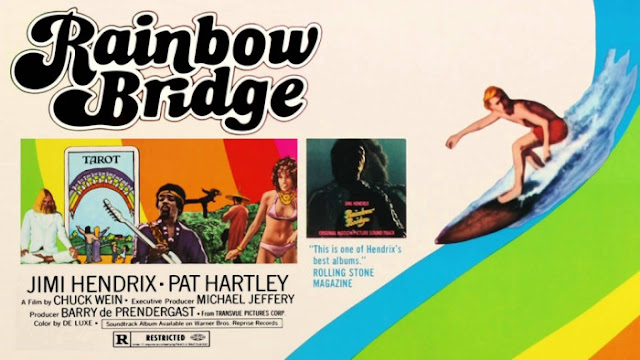 Mike Jeffery, the manager for Jimi Hendrix and the Experience, toured them relentlessly after their apotheosis at Monterey Pop in ’67. By ‘69, the guitarist was earning $100,000 per gig, but was too exhausted and drugged out to realize that he was virtually broke while Jeffery was a multi-millionaire with off-shore numbered bank accounts.

At last, burnt out on touring, Jimi told his manager he was disbanding the Experience. No sooner did he reveal his intention than he was busted for heroin possession in Toronto.

He came to suspect that Jeffery, desperate that he might lose his cash cow, had engineered the bust so he, Jimi, would be forced to keep the Experience alive to foot his legal expenses.

Four months later, just after Woodstock, Hendrix was kidnapped at gunpoint, held hostage for several days, then ‘rescued’ in a dramatic shoot-out at his Woodstock compound.

Soon he came to suspect that his manager was behind this intimidation too.

Still refusing to surrender to Jeffery and revive his golden goose, the Experience, Jimi formed the Band of Gypsys. At their premiere Madison Square Garden gig in January of 1970, Jimi collapsed on stage after only a few songs.

Buddy Miles insisted he’d seen Jeffery slip him two tabs of bad acid. ‘He didn’t want Jimi playing in an all black band,’ the Gypsys’ drummer declared. ‘One of the biggest reasons why Jimi is dead is because of that guy.’

By this time, terrified of Jeffery, the star was in secret negotiations with Miles Davis’s manager, Alan Douglas. After his Isle of Wright performance, Jimi lay low in London trying to avoid Jeffery who had followed him there. Meanwhile, he finalized a new management deal with Douglas.

On the morning of September 17, Douglas phoned Hendrix’s New York lawyers, informing them that he would be relieving Jeffery of his management duties. Meaning, not only would Jeffery lose his cash cow, his nemesis Douglas would, in taking over the books, discover his embezzlement and mismanagement over the years. Meaning the end of Jeffery’s career, if not imprisonment.

The next morning an ambulance, called by an unidentified party, screamed to the Samarkand Hotel where Hendrix was staying with his girlfriend, Monika Danneman. The paramedics found the door open, the flat abandoned, and a body on the bed covered in vomit.

Dr. John Bannister, the physician on duty at St Mary Abbot’s hospital when the ambulance arrived, later testified: ‘Jimi Hendrix had been dead for some time… Red wine was coming out of his nose and out of his mouth. It was horrific.’ He described how he tried to clear the singer’s windpipe with an 18-inch metal sucker, but finally gave up due to the inexhaustible volume of liquid.

‘Someone apparently poured red wine down Jimi’s throat to intentionally cause asphyxiation after first causing barbiturate intoxication,’ Dr. Bannister concluded. ‘Without the ability to cough he was easily drowned.’

Waterboarding and Forced Ingestion were commonly used by MI6 and other intelligence agents during the Cold War. It was a preferred interrogation or assassination technique since it left no marks on the body.

In his 2009 title, ‘Rock Roadie,’ James Wright wrote that Jeffrey, his employer, confessed to the murder in 1971. ‘That son of a bitch was going to leave me,’ the manager said. ‘If I lost him, I’d lose everything.’

Instead, he gained a fortune: his management contract was renewed by default, he reaped the immense profits of posthumous record sales, and he collected on a $2 million dollar insurance policy which he had taken out on the star.

Michael Jeffery disappeared during a mysterious plane crash over France in 1973. His remains were never found. He was due in London court the very next day to defend himself in several huge lawsuits relating to his embezzlement, money laundering, and fraud.

During the morning of 18th September, she finds him unresponsive in her apartment at the Samarkand Hotel, Notting Hill. She calls for an ambulance at 11:18 a.m. and he is taken to St Marys Abbot’s Hospital where an attempt is made to resuscitate him. He is pronounced dead at 12:45 p.m. The post-mortem concludes that Hendrix choked on his own vomit and died of asphyxia while intoxicated with barbiturates. At the subsequent inquest, the coroner, finding no evidence of suicide and lacking sufficient evidence of the circumstances, records an open verdict. Dannemann stated that Hendrix had taken nine of her prescribed sleeping tablets, 18 times the recommended dosage.