strange coincidence to yesterday's post about the KKK in 1925 at the race track with Ralph de Palma's Miller Special... I found Phillip Guston's satiric KKK in a car with cigars, titled City Limits, in the New Yorker article about what it takes to be an artist 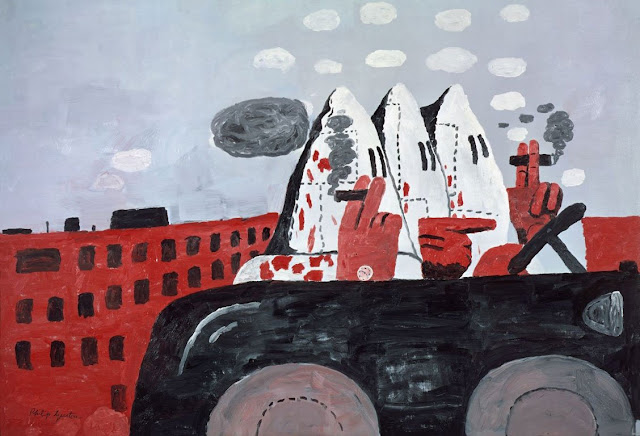 Hooded Klan figures first appeared in Guston's works after one of his Los Angeles murals was vandalized by the Ku Klux Klan in 1933.

Philip Stein, the American artist who painted murals with Siqueiros in Mexico for ten years, and later wrote the biography, Siqueiros: His Life and Works, also mentioned the incident, stating that the Red Squad had “confiscated the paintings, all rich with political content. When eventually the paintings were returned, they were full of bullet holes.”

Robert Storr’s biography on Guston recounted the story in the following manner; “By 1933 Guston had executed his first public work, a series of portable panels based on the notorious racist trial of the Scottsboro Boys. He then watched in anger and amazement as the panels were mutilated by members of the Police “Red Squad” and a gang of American Legionnaires, who took pleasure in using the eyes and genitals of the black figures in the painting for target practice. The persecution that Guston had only imagined thus became all too terrifyingly real.”

Jean Bruce Poole and Tevvy Ball, in their authoritative history, El Pueblo: The Historic Heart of Los Angeles state that; “Early in 1933 the L.A.P.D. Red Squad raided the club offices, and a number of paintings and frescoes were damaged. The club brought suit against the city, claiming that these were valuable works fashioned by Siqueiros’s students and alleging that officers had removed a number of paintings and shot or poked them full of holes.” 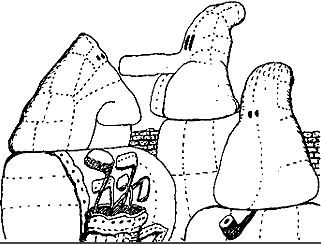 As line drawings on cream-colored stock, these images rely upon a system of symbols to distill the character traits of each figure. Nixon is depicted with an elongated nose, which along with his extended jowls assumes the shape of male genitalia; Agnew, ever the dolt, appears as a cone-head in a patterned shirt, his neck studded with nails; Mitchell is identified by his ubiquitous pipe, and Kissinger is usually represented as no more than a set of thickly framed eyeglasses, his signature attribute. 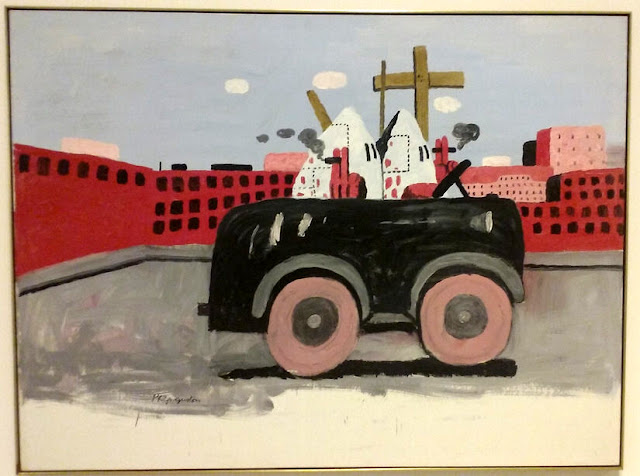 In a 1970 interview, he revealed what was behind his leap from pure abstraction to figuration, “I got sick and tired of all that Purity! I wanted to tell stories.” And in a 1974 interview he said, “When the 1960’s came along I was feeling split, schizophrenic. The war, what was happening to America, the brutality of the world. What kind of man was I, sitting at home, reading magazines, going into a frustrated fury about everything - and then going into my studio to adjust a red to a blue?”

Guston's once elegiac abstraction paintings, yielded around 1967/68 to their visual opposite: to images of the Ku Klux Klan, hanging light bulbs, books, clocks, shoes, and paintbrushes among other disparate figures and things that had cothe to populate and momentarily destabilize his interior landscape.

Guston's good frined Philip Roth showed his piece in the New York Review of Books to Guston and mentioned his desire to continue to elaborate on the president's foibles, to develop a cohesive spoof that would draw more fully on the duplicities and pitfalls of Nixon's political actions and speeches.

The combination of Nixon's insatiable ambition and apparent lack of principle seemed like fiction to Roth, a perversion of the ideals embodied by the White House. As he noted after Our Gang was completed in mid-July of 1971, "Look at him today, positively gaga over his trip to Red China, as he used to call it when he was debating Kennedy. Now he says the 'People's Republic of China' as easily as any Weatherman. Doesn't he stand for anything? It turns out he isn't even anti-Communist. He never even believed in that."

Guston responded equally to Roth's "exuberance" about taking on Nixon and decided, as the writer remembers, to "chime in."

His own project, Poor Richard, a series of caricatures which trace the history of Nixon's life, expounds, like Our Gang, on the President's wily deceptions, but with salient differences. Poor Richard is not a text. Moreover, it contains no captions and relies exclusively upon Guston's ingenious drawings to convey the chicanery of Nixon and his Cabinet. From the occasional dates that appear alongside Guston's signature on these images, they appear to have been produced during the month of August, in one apparently manic or prolific outburst,"  after the manuscript for Our Gang was sent off to Roth's publishers."  Roth read Poor Richard as "a parallel activity," a visual counterpart to his own put-down of Nixon. While both projects are deeply mocking, building on Roth's and Guston's weekly antics, they converge only as satire, the narrative structure and content being unrelated.

Throughout this brief section that highlights a pivotal crisis or trial in Nixon's early political life, his nose and cheeks continue to expand, stretching into an unmistakably large phallus which becomes emblematic of his growing deceit.  Nixon's schnoz becomes in Poor Richard an obscene realization of the diminutive of his name Richard, or Dick. The image is clearly sexual; but here, Guston suggests, a nation is being screwed rather than any one individual.