New York State Route 97 runs along the Delaware River, but when constructing it, they ran into a railroad problem... the rail road already owned the best part of the valley for a road 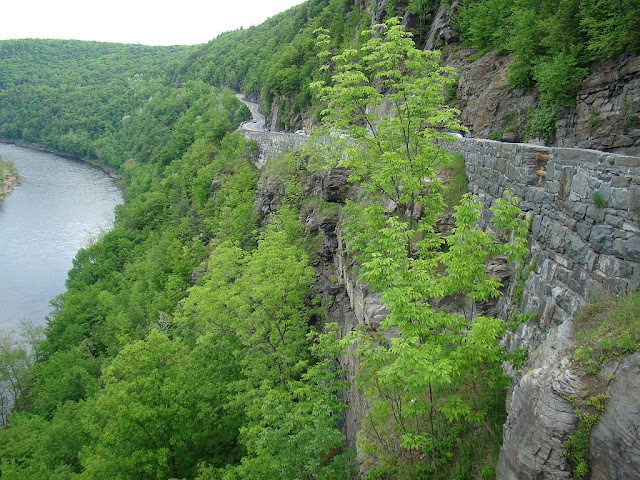 Most of Route 97 follows a shoreline path along the Delaware at roughly water level.
This was impossible for one section though, as the shoreline right-of-way was owned by the Erie Railroad and they refused to sell. Thus, the only option was to pave an already-existing narrow dirt road that ran along the shoulder of the bluffs towering over the river valley.
This required an enormous retaining wall to serve as a platform for the road. Portions of the retaining wall consist of remnants of the Delaware and Hudson Canal.
https://www.atlasobscura.com/places/the-hawks-nest
Tom adds to this!
To add to this history is that along Route 97 one can visit the Roebling Delaware Aqueduct, which was completed in 1848 and is a suspension bridge. 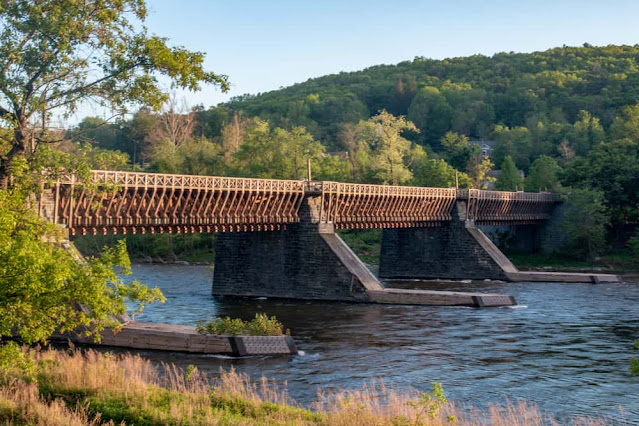 It was designed and its construction supervised by Auguste Roebling who would go on to design the Brooklyn Bridge. (And the Roebling Bridge over the Ohio River)
The D&H Canal ran in northeastern Pennsylvania to transport finished goods to the area and to transport raw products to New York City and to the world via the Port of New York. On the eastern side of the Delaware River, the canal continues to Rondout, which is now the northern end of Kingston, NY. However, the obstacle to a single canal boat trip was the Delaware River.
Roebling convinced the Delaware & Hudson Canal Company that he could solve their problem, and  proposed his suspension bridge. The canal company was so desperate to lower costs that they went along with his idea even though many considered it folly. After all, "How can a boat go over a river on a bridge?"
Well, if you were Auguste Roebling, you knew how and why because of the physical principal of displacement. His suspension bridge needed only to bear the weight of the water sitting in the canal of the bridge because, as a boat entered the bridge, it displaced an equal weight of water!

The bridge was a success and is the first suspension bridge in America.
Eventually, the commercial viability of the canal was superseded by rail. The canal was abandoned and filled, and the aqueduct was decommissioned in 1898. The aqueduct was then purchased by a local businessman who removed the canal side walls and the upper tow paths (thus exposing the cables) and installed a vehicular roadway. He used his new bridge to transport timber from his forests in New York to the rail lines in Pennsylvania. He allowed the public to use the bridge for a fee, payable at a new toll house built on the New York side. Several generations of toll keepers lived in the house until the 1970s.
http://hudsonurbanism.blogspot.com/2013/03/roeblings-delaware-aqueduct.html
You can drive your car over the bridge today. You can stop at the toll house on the eastern bank and see photos and drawings of the history of this marvel. So, if you are in New York, this is something to see as well as to enjoy the beautiful ride along Route 97.
https://uncoveringnewyork.com/roebling-delaware-aqueduct/
Thank you Tom! This is excellent history and bridge info! Much appreciated! '