at the Nisqually entrance of Mt Rainier national park, is Edward S Hall, (in the hat on the porch), who was superintendent at Mt. Rainier NP in 1912. There's an Excelsior on the left side of the photo 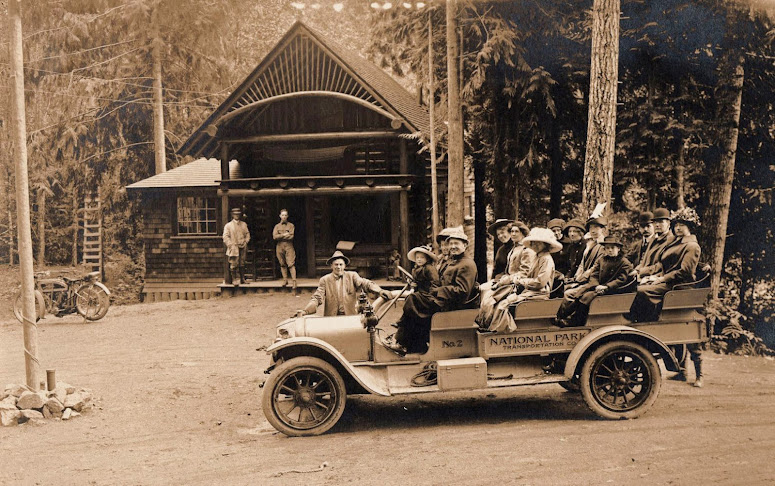 Thank you Kerry! Mr Hall is one of Kerry's great grandfathers, and it's pretty darn cool that Kerry shared this family photo with us!
Completion of the government road to Longmire in 1907 ushered in an increase in visitors, and with them the automobile; leading Mount Rainier to become the first National Park to officially permit automobile travel.
This distinction shaped the development of the Nisqually entrance; contributing to construction of park infrastructure such as the Oscar Brown ranger cabin in 1908, the Log Entrance Arch in 1911, a water supply system, a telephone system to communicate between ranger stations, road construction camps, and the superintendent’s headquarters. 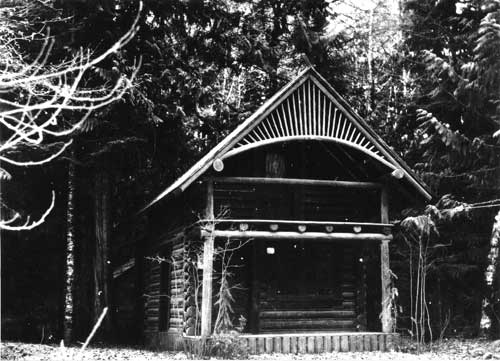 The Oscar Brown cabin, built in 1908, is named for the ranger credited with building it. Prior to its construction, rangers lived in tents, until the superintendent granted them permission to build a cabin on the site. The Oscar Brown Cabin was the first ranger cabin to be built it the park. It served multiple functions as housing, park headquarters and entrance station from 1908 to 1917. Rangers stationed there were primarily responsible for orienting visitors to the new park, and of course, collecting automobile permit fees.
The first cabin, known locally as the Oscar Brown cabin after the ranger who built it, is the only one from this era that still exists.
With the exception of the Oscar Brown cabin and the cabin at Longmire Springs, which both served as family residences, these cabins were simple, one-room structures, which apparently went up with little administrative oversight.
In the case of the Oscar Brown cabin, Acting Superintendent Grenville Allen provided Ranger Brown with a building plan, and Brown apparently built the cabin with Ranger McCullough's help in the early spring of 1908. Five years later, this cabin caught the eye of the Interior Department's chief clerk, Clement S. Ucker, who thought it was "an ideal cabin for the national park service." Ucker requested Superintendent Hall to send him a photograph of the cabin, a drawing of the floor plan, and its approximate cost. He then directed that the plan be redrawn by a draughtsman and distributed to the other park superintendents with the suggestion that it be adopted as a model ranger cabin.
The road from Nisqually Entrance to Paradise continued to be a priority item in the national park budget throughout this era. As completed by the War Department in 1915, the road narrowed to a one-lane road above Narada Falls. Rangers manned checkpoints at either end of the one-lane section, where they restricted traffic first to one direction and then the other throughout each day.
By 1920, the checking system was creating a severe bottleneck. To make matters worse, when the limited amount of parking space at Narada Falls and Paradise filled up, visitors simply pulled off along the edges of the road. Even before road funds could be expended to open up other corners of the park, it was thought that this road must be widened and improved and parking spaces made to alleviate the congestion.
Modest appropriations allowed the Park Service to make only piecemeal improvements on the road from 1916 to 1921.
It turns out that the Mt Rainier facebook page posted a poor copy of this image and cropped off the motorcycle.  https://www.facebook.com/MountRainierNPS/photos
How about that bus! Looks like a v shaped radiator.
Seeing this photo had me thinking, there must be other photos of these cool old tour busses 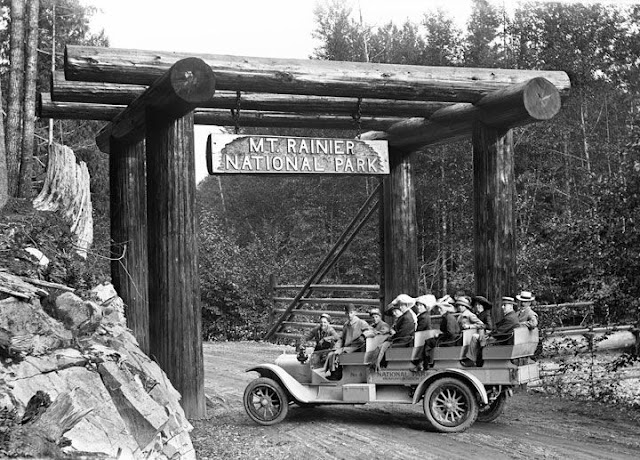 The log entrance arch at Nisqually entrance was constructed in 1911, spurred by Secretary of the Interior R.A. Ballinger who visited the park in 1910. Ballinger felt that the entrance lacked monumental character worthy of a National Park; which, he believed, required more than a ranger cabin and a painted signboard.
The structure which absorbed the most official attention was the log archway over the main park entrance. Arguably, the archway represented the first effort to beautify Mount Rainier National Park with a structure of rustic design. (The Oscar Brown cabin was older, but officials showed little interest in its aesthetics until later.)
The idea for the archway originated with Secretary of the Interior Ballinger, who visited the park in 1910 and found the entrance unattractive, with a dry riverbed on one side of the narrow road and jumbled rock on the other and nothing marking the boundary except the ranger's cabin and a painted signboard. At Ballinger's request, Superintendent Hall submitted a plan and cost estimate. Hall's idea was "to use the largest cedar logs obtainable for this work."
It would consist of "two uprights on each side of the road with cross pieces to bind them together at the top and one or two heavy logs to run from the uprights across the road."  Ballinger approved $250 for labor and materials, stipulating that the plans should include "a gate of rustic design constructed of cedar poles. The gate to be of somewhat similar design to that at the entrance of the home of Superintendent Hall but larger." 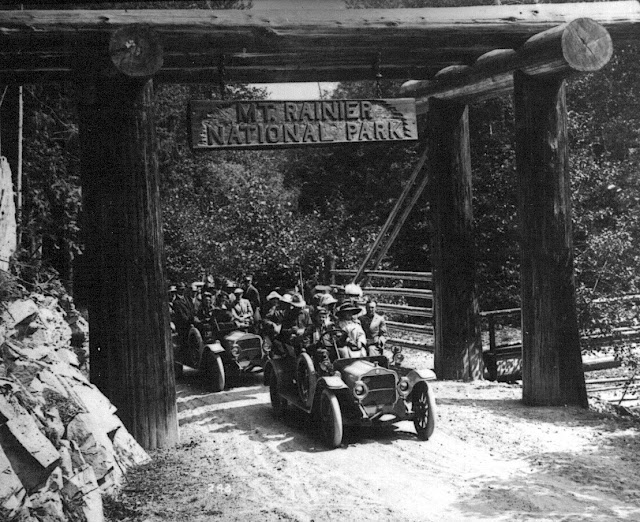 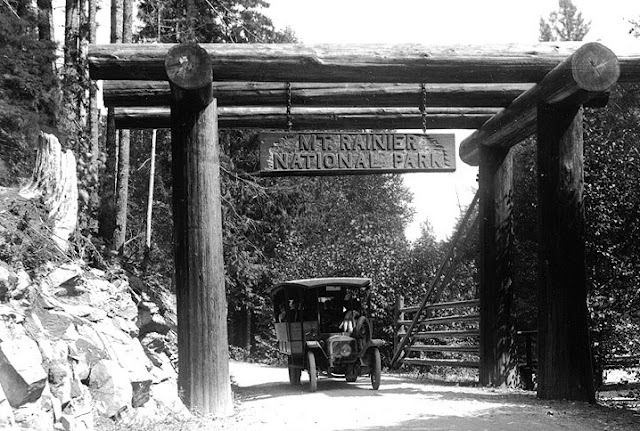 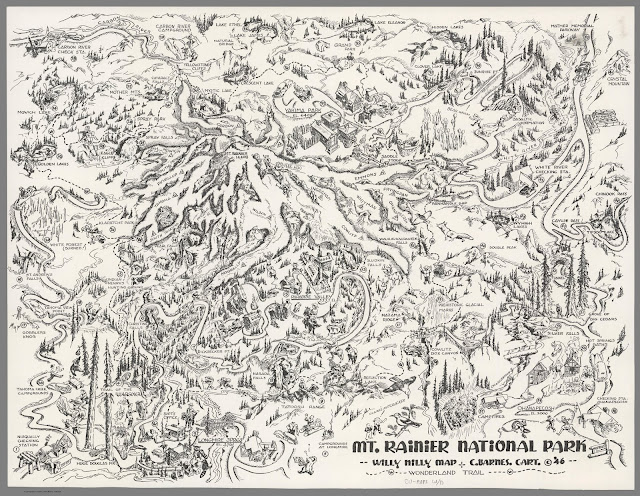