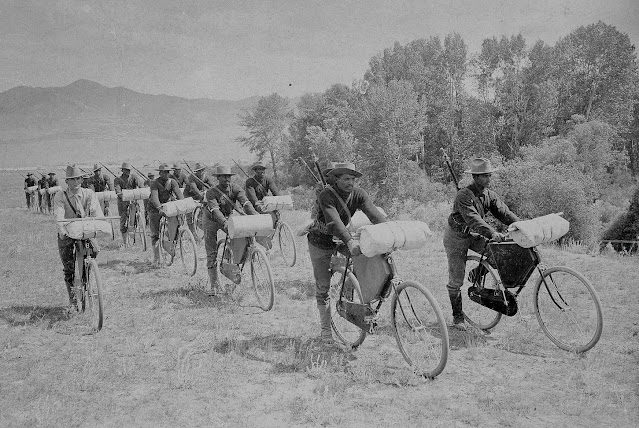 This group of soldiers was the 25th Infantry Bicycle Corps, and they were on their way to St. Louis, MO. Known as the “Buffalo Soldiers,” the 25th Infantry was a regiment of soldiers comprised entirely African descendants, created shortly after the Civil War.
By the early 1900s, the 25th would have gone on to become somewhat of a legend; in 1888, however, they’d been stationed at the Fort Missoula to keep them out of the way. So had their leader, Lieutenant James A. Moss. The Louisiana native had finished bottom of his class at West Point a few years earlier, and considering the town’s “backwoods” status, the Missoula post was not a prestigious one.
Fortuitously, these two misfit entities would be united by the newest fad in leisure to accomplish something amazing: complete one of the greatest journey’s in U.S. history, and show the world that the bicycle was a machine capable of amazing things. 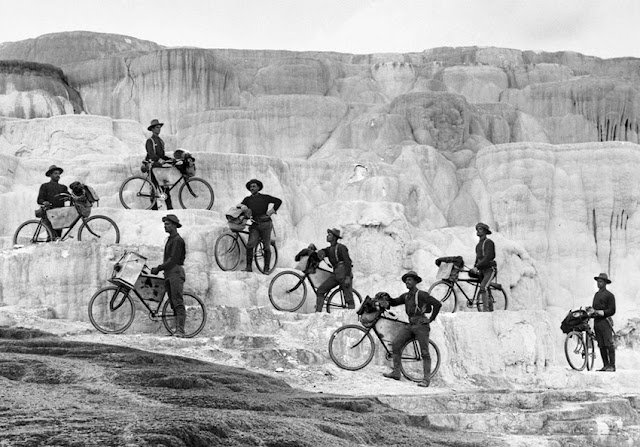 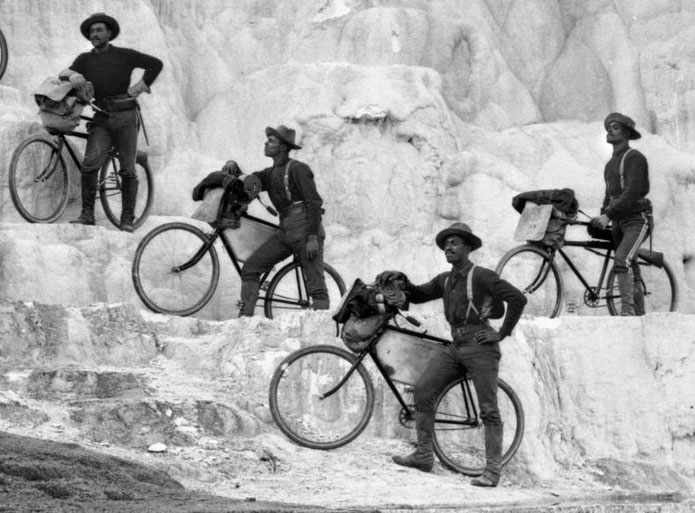 These posed photos are indicated as before the journey, because the bikes do not have chain guards. During the actual journey, all the photos show the bikes were equipped with chain guards 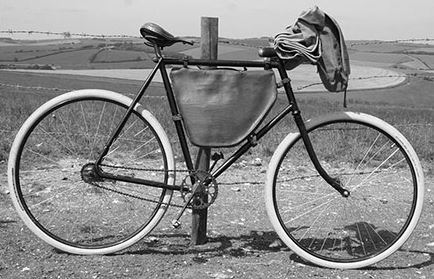 There was one problem. The Corps had 20 men but zero bicycles and zero funding to buy any. To overcome this, Lt. Moss struck a deal with the Spalding Bicycle Company—donate bikes to the expedition, and Spalding could use the Corp in their advertisements, and would be first in line to supply the military if the idea proved fruitful.
Spalding provided Lt Moss with 10 bicycles for the initial trial in 1896 and, the following year, for the well-documented 3800 mile trip, Spalding supplied 20 Spalding ‘Specials.’ 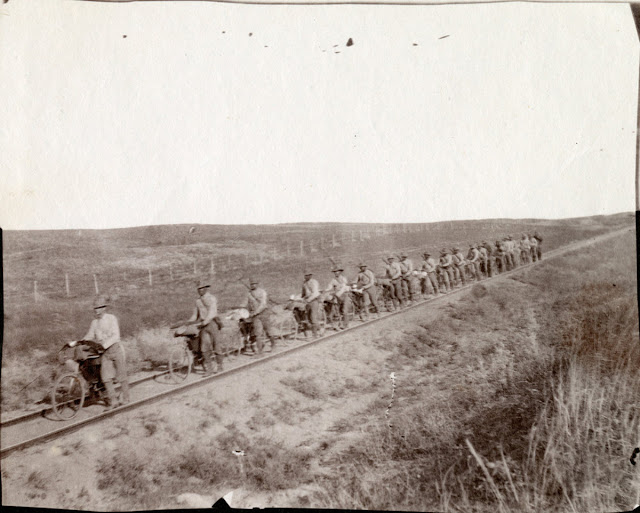 The plan was ambitious, to the point of seeming impossible. It was to ride from Fort Missoula, Montana to Yellowstone National Park and back in 1896 and then with a ride from the fort through the Rocky Mountains, and across the Great Plains to Saint Louis in 1897.
Using handlebar rolls and leather frame bags, the men carried around 55 pounds of gear each aboard their simple 1897 Spalding ‘Special’ Model 922 bicycles, which you can learn more about over at the Online Bicycle Museum.
When the Corps reached the Mississippi River, they were met by the Saint Louis Wheelmen, a local bicycle club, and escorted into the city on July 24. 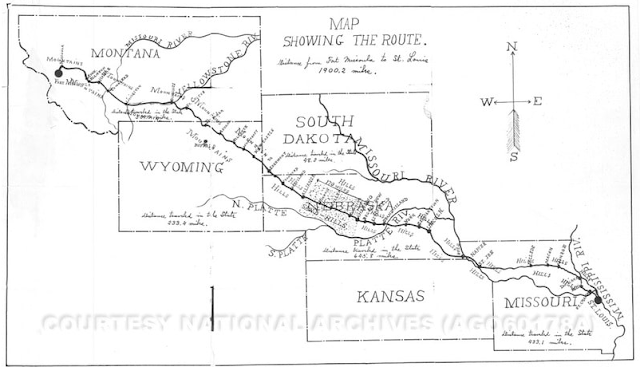 The bicycles were returned to the Spalding Company, and the soldiers returned to Montana by rail. Soon afterwards the 25th Infantry was deployed to Cuba in the Spanish-American War.
The 25th Infantry and Lt. Moss went on to earn distinction in the Spanish-American War (after a huge send-off from nearly all the citizens of Missoula, for which the 25th had become a point of pride), and when massive wildfires raged across Montana and Idaho in 1910, the 25th was there to help put out the flames. As the superintendent of Glacier National Park put it, “the work performed by them could not be improved upon by any class of men.”
https://www.vintag.es/2022/05/the-25th-infantry-bicycle-corps.html
Oh, the history that is ignored by Black History Month blowhards
There are even two books about them that came up on a q1uick google search 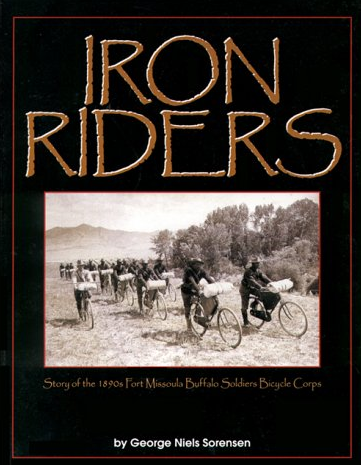 Steve told me about the above 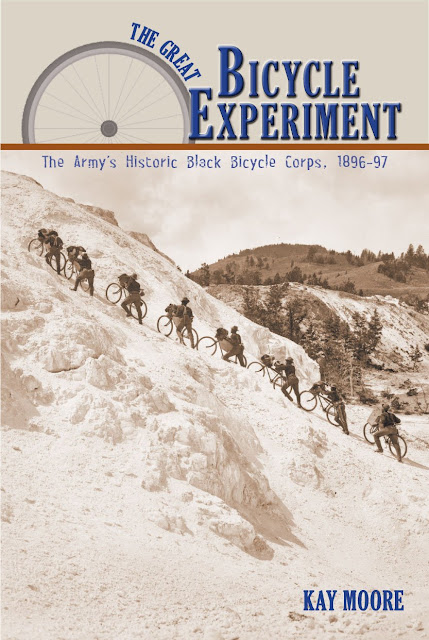 this one showed up when looking for that one 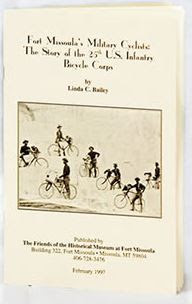 there once was a 3rd https://www.goodreads.com/en/book/show/12429646-fort-missoula-s-military-cyclists 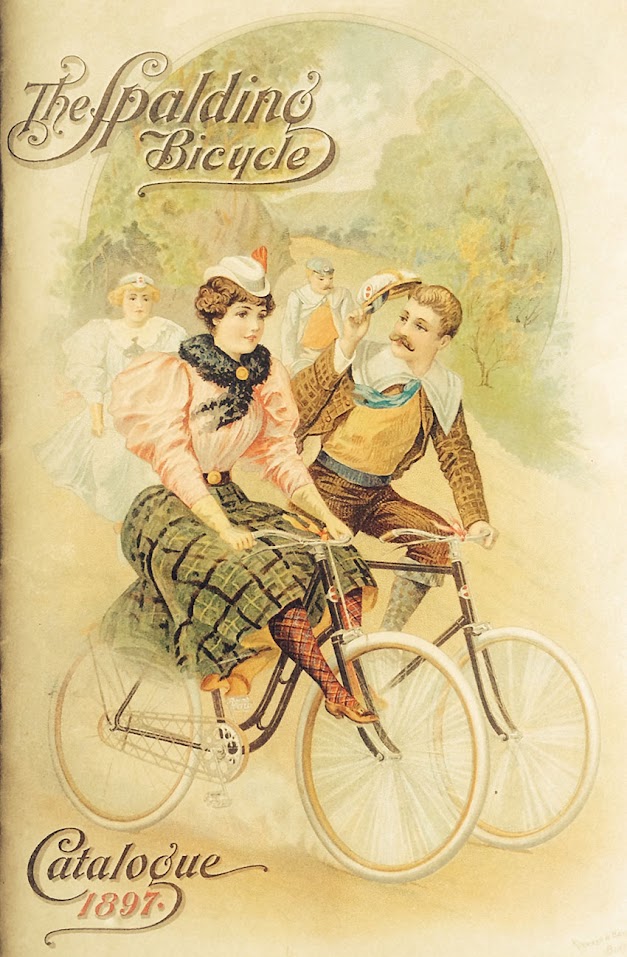