Bingo! I got lucky after searching for an hour or so, and found a COLOR photo of that B 29 that I posted yesterday! Nicknamed "Flagship" but not painted with the name 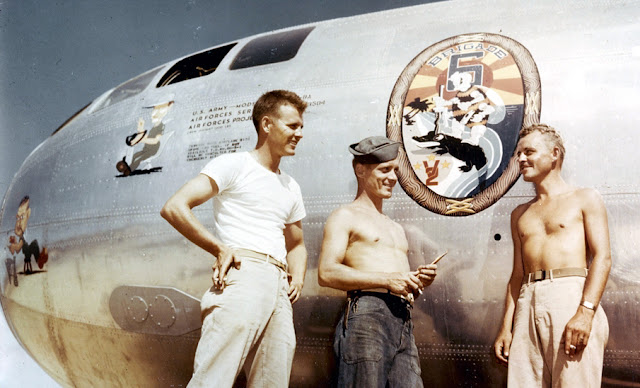 This plane was sponsored by the 6th construction brigade, whose emblem is painted on its nose. Seabee painter 1/c John E Anderson who had decorated the plane with caricatures of its crew, poses with two of the aircraft crewmen.

At Tinian circa late 1944, with some of its crewmen and two Navy "Seabee" Artists who had painted on its nose art, and added caricatures of its crew. Present are (L-R) PTRL/C William P. Kantz, MS3/C George E. Lawrence TSGT WM. E. Sunningham and SGT WM. L. Patton

“Flag Ship” became the first Superfortress to land on Tinian. It was damaged while parked at North Field, Tinian by a crashing B-29 42-24913 "Thunderin' Loretta" which crashed into 7 B 29s, damaging 5 so bad they were written off.  https://aviation-safety.net/wikibase/wiki.php?id=98511
Reclaimed at Tinker AFB, OK 11 Sep 50 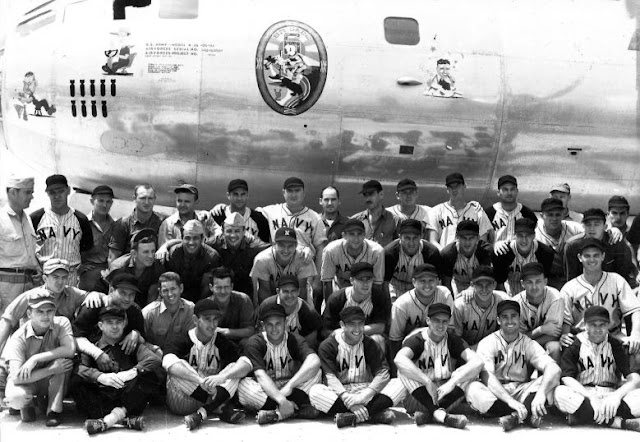 In this undated photo, the U.S. Navy team poses with airmen. Among the players in the image are Pee Wee Reese, Fred Hutchinson and Johnny Mize.

43 visible service members. Twelve of the men in baseball uniforms were wearing the road gray navy flannels while 14 were decked out in the pinstripes and blue home togs. Other men posing in the image are in the Army Air Forces and Navy military uniforms.