Thief steals rig, owner follows in a pick up truck and eventually - hits the thief with the truck killing him. Case closed. 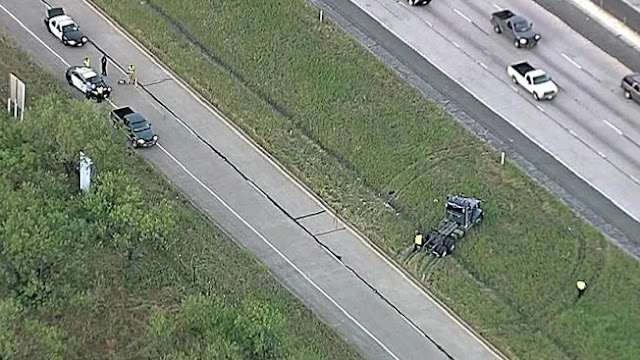 the thief tried to evade, and got the rig stuck in the median... got out and tried to make a run for freedom. Denied!

I-35 near Fort Worth. 150 years ago they'd kill a horse thief... well, things aren't so different now. A horse would cost about a years wages, or a lot of trouble to break a wild one. Now a vehicle you can earn a living with on the road costs about two years income. Why would the revenge for stealing one be any different? But hey, I'm a simple guy. When the person is caught jumping out of the drivers seat after stealing your rig, that is proof positive you have the right thief, and there isn't much call to tie up the court system and jails with something like this. Maybe I've been watching too  much tv, but, in simpler times in this, and every, country, not much time was wasted on thieves caught dead to rights.