“There’s no gas in all of Chihuahua.” Mexico has more problems than usual, and the border towns on the American side are suddenly selling out tankers of gas every week, instead of a 1/4 tanker a week 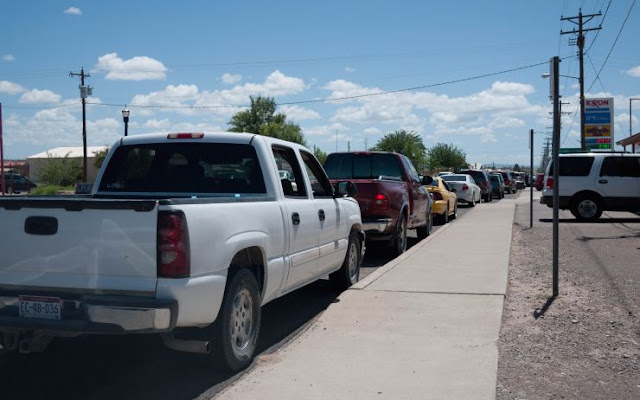 A mysterious gas shortage in the Mexican border state, home to some 4.8 million people, is pushing many Chihuahuenses to make the tedious cross-border journey into Texas to fill their tanks.

But Presidio, a town of 6,000 people and just three gas stations, wasn’t prepared to receive the long line of empty-tanked vehicles snaking up from Mexico.

Tom’s Service Station, an affiliate of Texaco, ran out of gas just two hours after it opened on Tuesday morning.

He says on an average day he sells about 400 gallons, and usually orders new shipments of petroleum every 10 days. But due to the unexpected lineup of vehicles from Mexico, Ornelas had to place an emergency order for a next-day delivery.

Javier Parada, a Kentucky resident, said he had been vacationing in Chihuahua, before he had to cut his trip short due to the gas shortages there. “I’ve been waiting for one-and-a-half hours,” Parada told me when he finally got his turn. “There’s no gas in all of Chihuahua.”

Local media outlets in Chihuahua are reporting that the state would be without gas until Friday.

Ernesto Laphond, president of the union that represents some of the biggest gas stations in Mexico, says the gas shortage is due to a number of factors, including technical problems at a Mexican gas refinery, followed by a “panic buying” —a sudden rush on the pumps that doubled the normal demand for gas.

Adding to the problem, he said, was the untimely closing of 20 local gas stations due to an ongoing internal legal dispute.


At the Pemex refinery in Salina Cruz the situation was becoming critical because tanker trucks have been unable to take delivery of propylene gas.

50 tanker trucks have been detained by protesting CNTE union teachers on the Tehuantepec-Salina Cruz highway.

Oaxaca Public Security Secretary Jorge Ruiz admitted today that an attempt to reach an accord with the protesters had met with a hostile response, leaving no other option but to free the trucks with the use of force. He said Governor Gabino Cué had instructed that dialogue be attempted with the teachers in order to explain the urgency of the situation but, Ruiz said, they refused to listen to the government’s proposal.

Federal Police used tear gas to drive away members of the militant CNTE teachers union from one roadblock near the town of Santo Domingo Zanatepec, although the educators later returned to that same spot and set up the blockade once again.

Teacher protests against education reform have been ongoing for some time, but intensified following the arrest last weekend of two Oaxaca union leaders on obvious bullshit charges of the theft of school textbooks and “operating with ill-gotten resources.”

The CNTE, a powerful union with nearly 200,000 members nationwide, opposes new federally mandated teacher evaluations that are part of a sweeping education overhaul enacted in 2013 over the strenuous opposition of the teachers union and grassroots organizations.

Many teachers say the education “reform,” which eliminated a series of union privileges, seeks to make them scapegoats for the failings of Mexico’s chronically underfunded schools.

Meanwhile, the previously government-controlled gas station industry is going to be sold to private service station operators this year for the first time since the 1930s.

Petroleos Mexicanos’ existing infrastructure is the only available fuel distribution infrastructure
to get gas piped into Mexico though, so distributors must use Pemex pipelines to import gasoline into Mexico.

After the regulator reviews the bids to use Pemex pipelines and the ones with the best terms are approved by the participating companies, the winning distributors will eventually be allowed to import gasoline to service stations throughout the country. While Pemex has been the only company to operate Mexican gas stations for decades, at least five new franchises will operate them by the end of the year, Garcia said.

Once distributors begin importing gasoline, they will be able to move fuel into areas where recent shortages have occurred, such as in the northern Chihuahua state, Garcia said.

And if you read opinion pieces of no known repute, like http://www.wnd.com/2016/06/cops-catch-islamic-refugee-at-u-s-border-with-gas-pipeline-plans/ and https://consortiumnews.com/2016/06/22/mexicos-neoliberal-reforms-spark-clashes/  the problem might only be the start of a lot more issues, like the govt of Mexico trying to get rid of the teachers union there, and or terrorists causing the fuel shortage to trigger a massive border crossing into the USA to sneak in among the fuel deprived Mexicans.
at Wednesday, June 22, 2016