the Birmingham Motors "No Axle" company bought the patents to the early 4 wheel independent suspension of the Blood Brothers of Kalamazoo, and built a superior car, doomed to be targeted by the corrupt US govt allies of the big 3 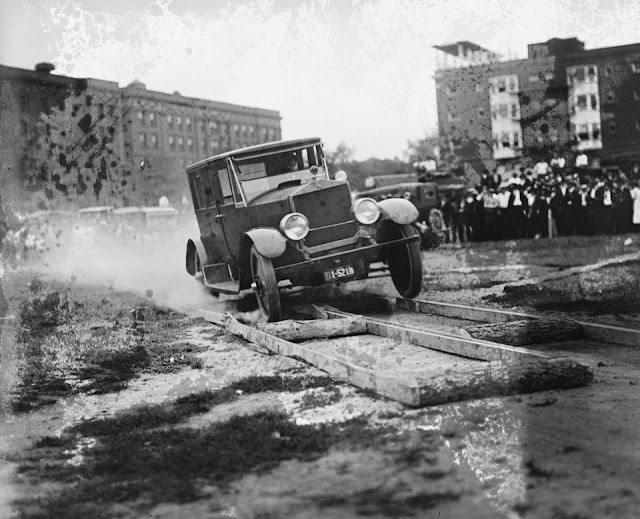 The company was so proud of its "no-axle" axle, that it challenged other makers to match their vehicles against the Birmingham on a stretch of road strewn with logs, replicas of corduroy roads.

Three transverse springs and an independent rear axle were combined with two transverse springs in front that made for a four-wheel independent suspension and the "easiest riding car ever put on the market," as advertising said. In the year of 1921, so few roads were paved, a smoother ride would guarantee incredible sales and profits.

According to The Examiner, July 26 1921, Birmingham Motors claimed, "this car is the easiest riding car ever built, regardless of price, and a car that will practically double the speed of other cars over rough roads." It was also noted that the rigid chassis coupled with the light-weight body was revolutionary.

The Birmingham also offered exterior finishes of DuPont Fabrikoid through a process called Haskelite, instead of paint.

The first Birmingham prototype sedan was completed and tested in Detroit in May of 1921, but already Jamestown, New York, had been selected as the factory site. The mayor of Jamestown, Samuel A. Carlson, agreed to serve as president of Birmingham Motors Corporation, accepting no salary for the position. Because he believed Birmingham would do for Jamestown what Franklin had done for Syracuse (and even, grandiosely, what Ford had done for Detroit), Carlson asked only for out-of-pocket expenses for promoting this new industry for his community.

Charles A. Towne (who had served in both houses of the U.S. Congress and who had run for the vice-presidency of the United States with Williams Jennings Bryan) came aboard as counsel. Stock was selling like hotcakes. But Mayor Carlson soon fell victim to his political enemies. Already a defamatory article about the company had appeared in the stock market publication "US Investor".

Initially it was thought this malicious piece of journalism could be turned to Birmingham's advantage. But in August 1922 the AP wire service buzzed with the news that a Federal grand jury in Washington had filed a presentment following a 10-month investigation by the U.S. Post Office.

Motor Age magazine - Aug. 12 1922
Charged with having sold worthless stock to the amount of more than $300,000 to Virginia, Maryland and District of Columbia investors, through misrepresentation, 18 officials of the Birmingham No-Axel Motors Corporation were indicted by the federal grand jury, on a specific charge of violation of federal statute No. 215, involving misuse of the United States mails. The indictment against the company officials returned as a result or more than ten months' Investigation by the Post Office officials who charge that agents of the company sold hundreds of thousands of dollars worth of stock on fictitious holdings and on promises which, according to the government's case, "the said Birmingham Motors knew never would be complied with."

The charge was fraudulent use of the mails to sell more than $300,000 of worthless stock, and among the 18 Birmingham men named was Mayor Samuel Carlson. Newspapers not friendly to Carlson had a heyday.

During the next two months Birmingham assembled 26 cars and chassis to prove its viability. But a stock holders meeting in October ended in bedlam, with one local stock salesman stabbed to death.
A Birmingham official smashed his way through a plate- glass window to escape.

In June of 1923, the indictment against Birmingham officials was dismissed in court.
But the exoneration came far too late for Birmingham Motors. A valiant attempt was made to generate favorable publicity with a Duesenberg-engined special-built Birmingham race car to compete in the 1923 Indianapolis 500, but the money ran out before it could be completed.

As many as 50 Birminghams may have been built during the contentious short life of the company. None of the cars are believed to exist today.

Preston Tucker and John Delorean did not pay attention to history, and were similarly doomed to repeat the knock out punch from mystery sources in the US government which conspired to end the competition to the big 3; Ford, Chrysler, and GM