Frédéric Sausset, first quad amputee in history to participate as a pilot in the 24 hours of Le Mans, came to repeat its ranges driving his LMP2 prototype. 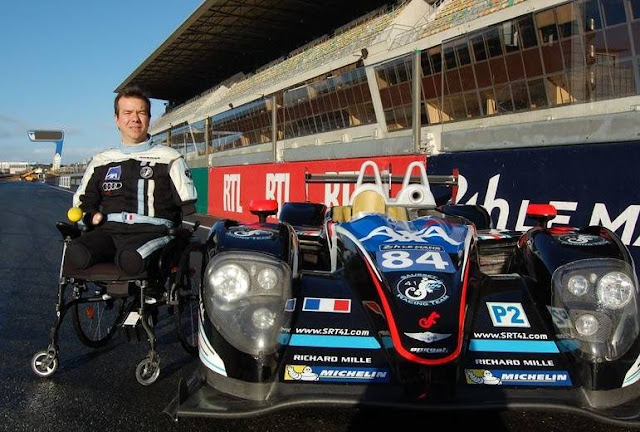 to get the video translated to your language, use the tool icon in the bottom right area, first to turn on Closed Captions, then to select your language


While on vacation in southwestern France in 2012, Frédéric Sausset, a 47 year-old French businessman, sustained a scratch on his hand, which developed into a potentially deadly infection called purpura fulminans. After battling the infection, Sausset fell into a coma and later awoke with his arms amputated at the fore-arms, and his legs cut off just above the knees.
http://blackflag.jalopnik.com/the-fascinating-way-this-quadruple-amputee-will-drive-a-1782186560

For many recent years, there have been 55 race cars at the start of Le Mans, plus a wild-card invite known as "Garage 56", sanctioning one car strictly outside the regulations of the cutting-edge Prototype and production-based GTE classes, but promoting true innovation – as Nissan’s DeltaWing in 2014.

This year there were 59 participants, and so the  “innovation” invitee actually was named "Garage 60", because of the enlarged grid, and this year the twist is more about the driver than it is about the car.

Frédéric Sausset has limited racing experience, but that isn’t unique given 180 drivers on the grid.

Enabled by extraordinary control solutions, he can not only share Car 84 with his two able-bodied team-mates, but can race on equal terms against the finest sports car drivers in the world. Such things do not happen in many sporting events at this level, but all credit to Le Mans that it will happen today.

It is the one headline that sets this Le Mans apart. That’s because the Le Mans regulations have quietly evolved to further emphasize efficiency in a way that has meaningful real-world benefits.

Another significant presence is the return of a “works” Ford effort. The Blue Oval may “only” be back in the GTE category, but it is taking on Le Mans regulars Aston Martin, Chevrolet, Ferrari and Porsche in the class that often delivers the most intense racing of all.

Evocatively, the Fords carry race numbers 66, 67, 68 and 69, commemorating the company's four consecutive wins in the glory days of the Ford-Ferrari wars in the mid-Sixties.

The #84 Morgan LM P2-Nissan entered by SRT41 by OAK Racing gets the slot specially reserved for innovative projects. David Lecleach, data and systems engineer at Onroak Automotive, has been assigned to the team and tells us more about the technology installed for Frédéric Sausset

Brakes: “We are the only car to have ABS which is a massive help when it comes to braking. There is a Master-Vac brake booster that creates a vacuum to provide assistance when the driver presses the pedal. Without it, he wouldn’t apply enough pressure to brake himself.”

Steering wheel: “It is unique. The prosthesis he wears has a tip at the end that he uses to turn the wheel. It has practically the same steering rotation as a standard wheel.

Extraction: “The regulations mean he has to be able to get out of the car himself if there is a problem. There is a compressed-air system that lifts his seat so that he can then tip himself out of the car.”

The other drivers: “There is a special steering wheel for Frédéric Sausset while Jean-Bernard (Bouvet) and Christophe (Tinseau) use a standard wheel. Frédéric’s pedal set is also different and he controls it with his thighs. He is connected to rods that are used to accelerate or brake, and there is no clutch as it’s an automatic gearbox. The steering wheel and the pedal set are removed when one of the other drivers takes over.”

Lights: “Eduardo Freitas, Race Director, has asked us to fit blue LEDs that only light up when Fred is in the car. When his steering wheel is connected, it automatically switches those lights on. They are on the front end, the roll bar and the rear extractor. A broad blue strip warns the drivers in front and behind.”