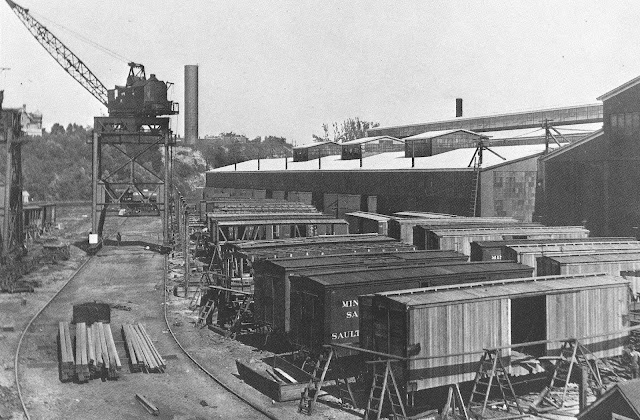 The Manitowoc Shipbuilding Company is known as a major shipbuilder for the Great Lakes and for the construction of 28 submarines during World War II.
But to make it through the great depression, they repaired railroad cars and locomotives in the 1920s.

The Manitowoc Shipyard was originally established by Charles C. West and Elias Gunnell in 1902 as Manitowoc Dry Dock Co.  By the time the United States entered World War I additional space on the northern portion of the peninsula was leased from the Wisconsin Central Railroad.
Soon the Manitowoc River near the peninsula was dredged and a new machine shop was erected – along with a new pipe shop, rigging loft, paint shop, and numerous storage buildings. The former Manitowoc Glue Company buildings were rebuilt and made into a tin shop, joiner shop, and carpentry shop.
Tracks were extended from the Chicago and Northwestern Railroad, as well as the Soo Line Railroad, and by 1919 there were 3 miles of track servicing the grounds for Manitowoc Shipbuilding.
Following the conclusion of World War I it was difficult for the Manitowoc Shipbuilding Company to acquire contracts for the construction of new ships.
To keep the shops busy and thousands of workers employed, the company made modifications to their shops to allow for locomotive and car repair.
A number of Chicago-based rail lines and lumber companies in northern Wisconsin and Minnesota had enough repair of locomotives and rolling stock to keep the Manitowoc Shipbuilding Company’s shops and employees busy for years.
https://www.manitowoccountyhistory.org/stories/railcar-repair
at Sunday, June 19, 2022