In the mid-90s one of Pepsi-Cola's ad campaigns was simple: you could collect points by buying Pepsi products. Once you collected 7 million points – you could claim a Harrier Jet.

Pepsi’s commercial caught the eye of a 21-year-old business student, John Leonard. He was only interested in one prize.
Leonard noticed some fine print. In place of labels, consumers could buy Pepsi points for ten cents each. He did the math and quickly figured out that it’d take him $700,000 to buy the Pepsi points he needed for the Harrier Jet. Then Leonard hit the phones and convinced five well off investors to give him the $700,000.

He sent Pepsi 15 labels and a check and waited for his jet. 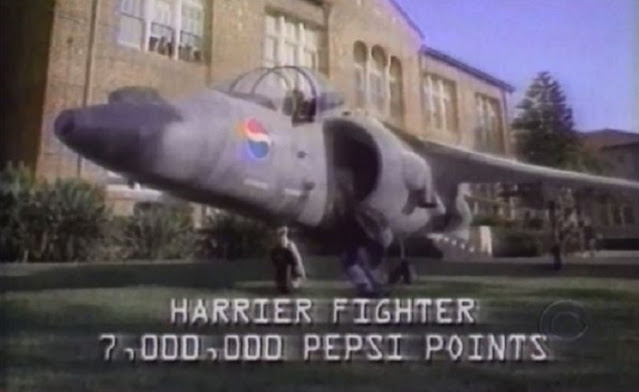 But the Harrier never came. In fact Pepsi said the ad was just a joke.

“Tens of millions of Americans, and people around the world, saw the spot, got the joke and laughed,” said John Harris of Pepsi-Cola. “Mr. Leonard saw the spot, hired business advisers and lawyers and decided to take legal action.”

After Pepsi went to court asking that Leonard’s claim be declared frivolous, he filed his own lawsuit demanding the Harrier.

“People point out that this Pepsi generation they’re trying to sell to is me,” said Leonard.

So the question became: Was John Leonard among the best and brightest of the Pepsi generation, or was he just a nuisance?

Pepsi did no such thing. Beyond its legal action, it updated its commercial by raising the number of points needed for the Harrier from 7 million to 700 million.

In the end, Leonard’s lawsuit fizzled out. A court granted a summary judgment in favor of Pepsi and ruled that, “no objective person could reasonably have concluded that the commercial actually offered consumers a Harrier Jet.”
https://theaviationgeekclub.com/that-time-a-man-sued-pepsi-for-not-giving-him-a-harrier-jump-jet/
at Monday, June 20, 2022