so much we see and hear every day is a drag, but I found something fun, in the drive through (that counts for cool stuff with wheels, right?) Like many stars, Mark Hamill's early job at Jack in the Box was not a fond memory. But he turned it around today 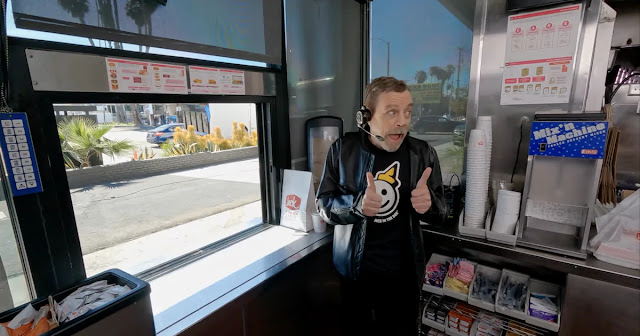 Before he was ever Luke Skywalker, the Joker or Skeletor, veteran actor Mark Hamill tried his hand at a totally different role: Jack in the Box employee in 1969.
Many people can tell stories of how they were fired from a job. From disgruntle bosses to mishandled responsibilities, those first jobs can be a learning experience. For Mark Hamill, his time at Jack in the Box was short-lived.
As a teen in the ’70s, he didn’t find nearly as much success in the drive-thru window as he’d later have throughout his long-tenured film and TV career—in fact, he was fired from the fast food restaurant for impersonating a clown while taking orders.
In an extension of the campaign, Jack in the Box will also released a limited edition comic book starring Hamill and his storied history with the brand. The book will be available to purchase this month via the brand’s dedicated merch site and DriveThruComics.com.
Before breaking through in Hollywood, Hamill was a theater arts major at Los Angeles City College. The 18-year-old needed a job, so he wandered into a nearby Jack in the Box and got hired on the spot.
"I had worked at another fast-food place when I was like 16, so I knew the routine," Hamill told Insider. "I made shakes, I worked the grill, but I always aspired to work that takeout window."
"I wanted to interact with the public, and I loved the idea of speaking for the clown-mouth speaker," he added
"Instead I was always in the back,  and when I got my chance at it, I blew it," says the actor. When he finally got to take orders through the speaker, which used to project from the chain's clown head mascot, he tried out an exuberant, clown-like voice to say, "Welcome to Jack in the Box. May I take your order?"
An actor through and through, Hamill said it never occurred to him to use his everyday voice at the drive-thru window. But his impersonations got him fired just a month after he first started at Jack in the Box.
"Well, I thought it was clever. The manager thought otherwise," he laughs. "I was probably really irritating. Anyway, he just told me to go home and never come back."
That would've been the end of Hamill's Jack in the Box story if it wasn't for a 2019 appearance on "The Late Late Show with James Corden."
Hamill was on the show alongside Bradley Whitford, who revealed that he had once been the actor's waiter. Whitford thanked Hamill for tipping "like a banshee," which prompted Hamill to share his Jack in the Box origin story.
Nearly three years after that appearance, Jack in the Box contacted Hamill and asked to join forces again. Hamill returned to his spot at the Jack in the Box drive-thru menu and filmed a commercial to celebrate the chain's spicy chicken strips and french toast sticks. "The funny thing is we're bringing these back for a limited time, we're also bringing back Mark Hamill for a limited time!" Jack said.
https://www.facebook.com/jackinthebox
https://foodsided.com/2022/08/02/mark-hamill-finally-gets-his-jack-in-the-box-redemption/
https://www.adweek.com/creativity/jack-in-the-box-brings-back-old-menu-items-and-former-employee-mark-hamill/
https://www.insider.com/mark-hamill-once-fired-from-jack-in-the-box-2022-7
at Tuesday, August 02, 2022