Greenpeace activists boarded a ship arriving in Britain on Thursday to stop the delivery of more than 1,000 Volkswagen cars from Germany 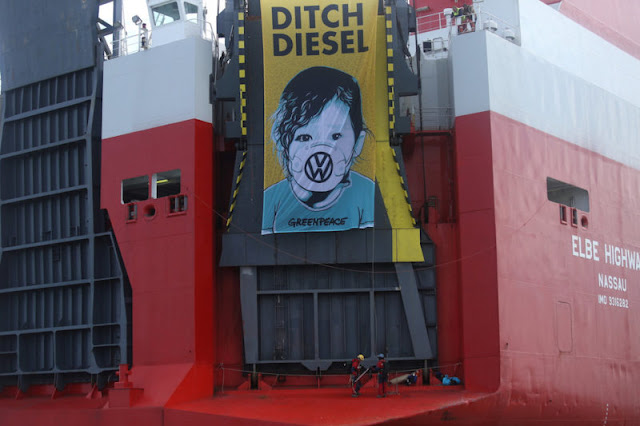 Greenpeace said its volunteers had boarded the ship in the Thames Estuary in an attempt to stop it unloading at the port of Sheerness in the southeast of England.

Two Greenpeace activists were still on board, having unfurled a banner with the words “Ditch Diesel” alongside an image of a young girl suffering from a respiratory illness, a spokesman for the environmental pressure group said.

Other protesters had earlier broken into a vehicle park at Sheerness to stick labels on engines and attempt to immobilize cars by taking the keys, Greenpeace said.

Most have now left but two remain on site, holding several thousand car keys, and will remain there until the ship returns to Germany, a spokesman said.

The carmaker also said that the majority of the roughly 1,200 cars on the boarded vessel were petrol rather than diesel models and that its vehicles meet stringent European regulations.

“Diesel cars are toxic – so we’re here to block VW imports on behalf of all of the children who are the most acutely affected by the health impacts,” 38-year-old Janet Barker, who took part in the protest, said in a statement