new info about Burt Munro and his land speed racing 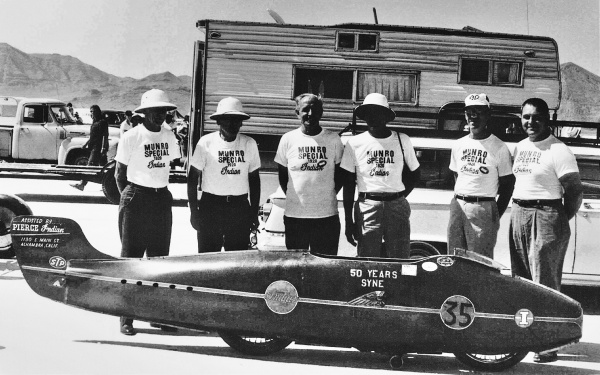 Hollywood's discrepancies in the "The World's Fastest Indian" include Munro setting the record during his first run on the salt, when in fact it was during his fifth year of racing.

Burt ran his bike at Bonneville until 1973, and his end of racing was due mostly to a massive change of the rules in regards to motorcycle streamliners which took place after the 1972 competition year. Roll bar/cage and fire protection rules

Burt was there in 1973 with his motorcycle but he was not allowed to run the streamliner shell, he had to run open frame. Burt was specifically asked to be the first competitor down the track that year, which was the anniversary of the 25th running of the Bonneville National Speed Trials.

He was photographed and filmed a lot for that run….He put on a “brave face” and was all smiles but those who knew him recognized that it “cut his heart out” to no longer be able to run his beloved streamliner. I believe that, open framed, he went about 147 mph…..and I do not recall if he ran any subsequent runs. 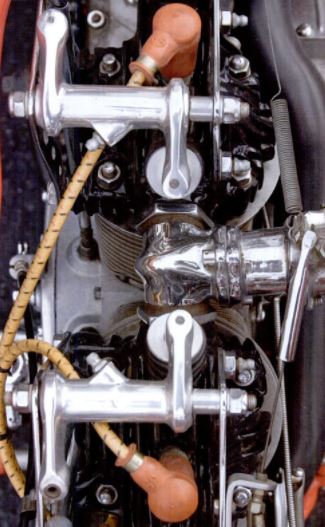 We all know that Burt's motor was a Indian flathead motor converted to an overhead valve, that was pushrod operated. So technically, his motor was a pushrod motor. And his record can't be broken.

You can take his record out of the book if you run SF 1000cc and averaged more than 183.586 in two runs, but you would be running in a non pushrod class. So technically, you wouldn't outrun Burt.

If you built a streamlined pushrod fuel bike and went faster than 183.586 for two runs, you still wouldn't beat Burt's record because your record would go in the book in the Pushrod class.

Now, Burt's bike was an A bike with a streamline shell, not legal today by any stretch of the imagination, according to the streamline rules. Not even APS. In 1990 SCTA started a Pushrod class and left Burt's record in the non pushrod class, because that is where it was set in 67. The classes set in 1990 were pushrod engine gas (PAG) and pushrod engine fuel (PAF).

Bert's full name was Herbert.... thus the spelling with an "E"..... NOT a "U" that you see sometimes...  but was Burt himself who substituted the U for the E , he preferred it that way. 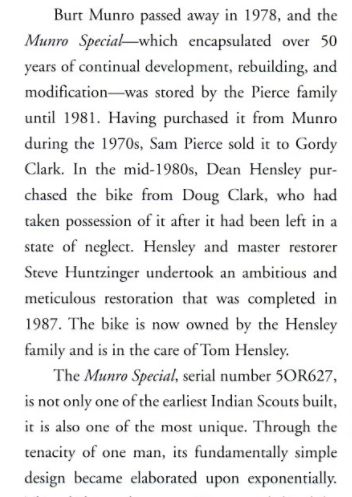 The motorcycle in USA is Burt's original 1920 Indian Scout which he bought new and modified…but the engine from that bike was brought home to NZ by Burt. He built an engine from his spares…modified but not to the specs of the original engine…to take back to the States to sell with the bike in 1975.  http://justacarguy.blogspot.com/2010/02/burts-trailer-simple-and-effective.html

"For a while the Pierces displayed the World’s Fastest Indian in their showroom, then relegated it to the warehouse, and ultimately to the elements outside, where the decades of Munro’s loving modifications slowly deteriorated into the ground. Enthusiast Gordy Clark purchased the Indian from the Pierces, but just put it into storage.

Remember, at this time Munro’s motorcycle was just a beat-up old racer, not very interesting to even the most serious motorcycle collectors. This was before the modern antique bike craze really took off. It was a curiosity, nothing more. Enter Dean Hensley. Dean, Tom Hensley’s older brother, was a rising motorcycle racing star.

“He had known about the Indian for years,” Tom said, referring to the historic bike that had been stored in a neglected state among Gordy Clark’s 300-bike collection. Dean purchased the bike in 1986, soon after selling the antique mirror company. He had gone to an auction, maybe it was at Hershey, and saw that old streamliners were beginning to sell for substantial money,” Tom said. “That’s when he decided to try and buy the old Burt Munro bike.” After the purchase, Munro’s Indian sat around for a few years as Dean gathered enough information and parts to begin restoration. Since the bike sat outside for years, four frame tubes filled with water and rusted out.”

The left side of the body hung on my garage wall for 20 years,” said brother Tom. “The fiberglass had settled, so getting it fitting back together was like fixing Marty Feldman’s eyes. We had to mount it to a board, let it sit in the sun, and every day turn the set screws one-quarter turn to get the body to move back into place.” Dean brought his now-restored Indian streamliner to a Davenport, Iowa, swap meet and decided to start the bike after it hadn’t run in 20 years. They had built an Indy-type starter that mounted on the countershaft, and Dean could operate it with hand controls.

In the spring of 2011, Tom received a phone call from the organizers of the Pebble Beach Concours d’Elegance. They said if he could prepare the streamliner to running condition, he could enter it in the prestigious show. “We were already in the process of getting the bike running with new rods and pistons when Pebble Beach called,” he said. “They said it had to be in running condition in order to come to the show, so we built brand-new cylinders from scratch and had the bodywork fitted exactly the way Munro had it mounted when he ran for the record in 1967.”