when a baseball legend step on the seats with his cleats on, he's probably trying to tell you something 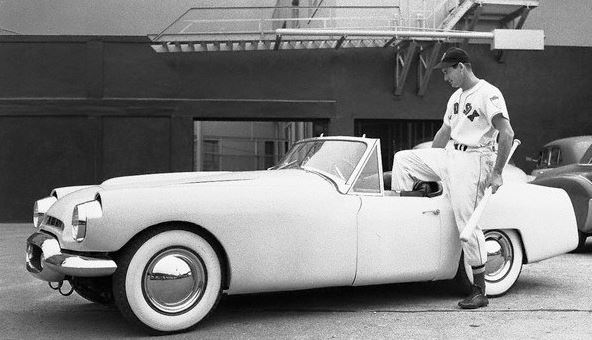 In the summer of 1951, S.C. Johnson and Son of Racine, Wisconsin, bought one of the new 1951 Nash-Healey roadsters with the idea of featuring it in a contest as part of a promotion in the United States and Canada for two of its car waxes. Ted Williams, star outfielder for the Boston Red Sox, was signed to appear in national advertising and would receive the car as a gift when the promotion ended.

To make the car even more appealing, Johnson Wax commissioned William Flajole of Detroit to design and build a one-of-a-kind roadster body for it. A year earlier, he had devised the small NXI experimental that evolved into the British-built Metropolitan, and he later became involved in the body design for several early Rambler models.

"As a postscript to this reminiscence, I wrote to Ted Williams in early 1985 to find out what happened to the car after it was given to him," says Conde. "His response: 'All I remember is that I sold [it] to someone in Detroit. I wasn't interested in the car. In fact, I never drove it.'"