Not good news... more like, scum of the earth report. An attorney.. need I say more? For the VA... still not out of hate yet... started his own charity for Nam Vets. But wait, it only accepted donations. So, not really a charity, except for the attorney who owns and runs it 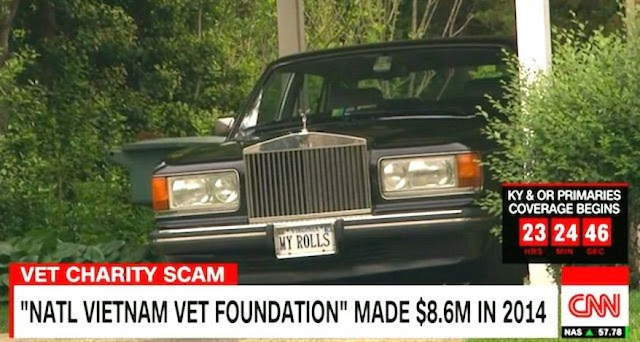 Charity Navigator’s, one of the nation’s largest charity watchdogs, has discovered that NVVF has donated less than 2% of it’s income from 2010-2014 to charitable causes that help veterans.

The company’s CEO and founder is a veteran himself. J. Thomas Burch not only runs/owns NVVF but is also a federal employee working as an attorney for the Department of Veterans Affairs. Many are wondering how someone who is involved with the VA and has a military background could allow so much money to be misused. Only $122,000 out of the $8.5 million raised in 2014 has been doled out in cash donations to veterans.

Charity Navigator’s alleges that the NVVF has grossly misused the money collected through donations from hard-working Americans. A review of the NVVF’s 2014 tax return reveals that over a quarter of a million dollars was squandered that year alone. Donations were used to fund $133,000 for travel, $21,000 for unnamed “awards”, $70,000 for “other expenses” and more than $8,000 for parking. Only 2% of the total income from donations was sent to causes to help veterans while a large majority was spent on telemarketing for the NVVF.

“You can’t go lower than that,” says Michael Thatcher, Charity Navigator’s CEO. “They don’t have an independent board of directors, they actually don’t even have a comprehensive board of directors — only three members on the board at this point in time and some of them are family.