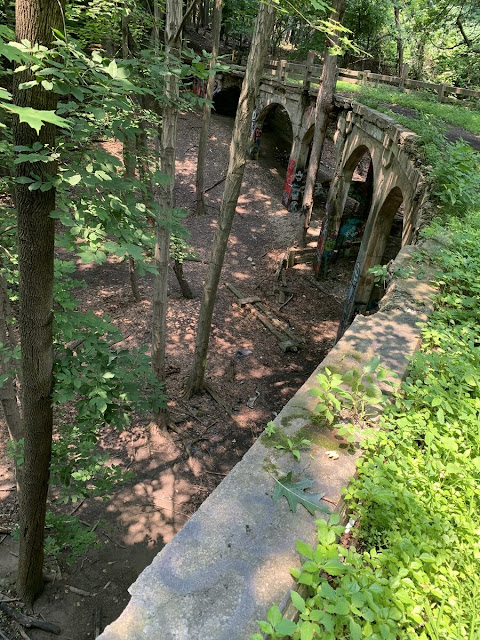 The Hillandale Bridge was built for a housing development that was never completed.
It and the surrounding land were abandoned during the Great Depression of the 1930s.
Now it's an old brick road in Euclid, Ohio, near a city park of the same name.
https://www.atlasobscura.com/places/hillandale-bridge

When it was built in 1882, people were blown away. Over a hundred years later, the bridge itself would be blown away by a tornado
The original viaduct was approximately 301 feet high and 2,053 feet long, making it the world’s longest at the time. It was billed as the “Eighth Wonder of the World,” and day-trippers would come on excursion trains from as far away as Buffalo, New York to marvel at the expansive Pennsylvania construction.
in 2003 an F1 tornado with wind speeds around 94 mph struck the side of the Kinzua viaduct. Eleven towers from the center of the bridge were torn from their concrete bases and thrown to the valley floor, leaving only the end portions of the bridge intact. After that, it took just 30 seconds for the iron behemoth to come crumbling down.
Repairing the Kinuza Bridge would have cost around $45 million. Instead, the state of Pennsylvania made the mangled metal an attraction in its own right. Today, visitors can walk a 300-foot restored portion of the bridge, which leads to an observation deck with a striking view of both the Kinzua Creek Valley and the wreckage below.
https://www.atlasobscura.com/places/kinzua-bridge 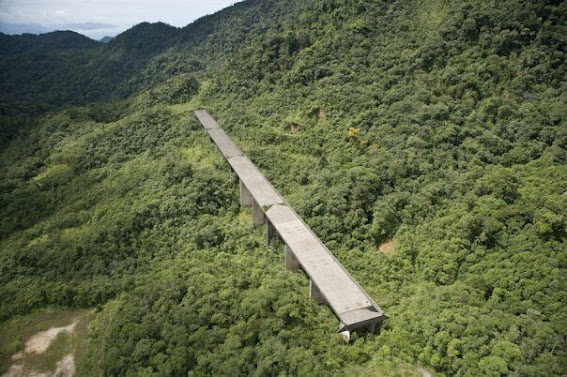 Construction on the Rio-Santos Highway in Brazil began in the 1960s and by 1976 the stretch of road was due to be linked to the existing highway. However, the plans were altered at the last minute so that the existing road was linked to a coastal route and the newly constructed, but never used viaduct was simply abandoned.
https://www.atlasobscura.com/places/viaduct-petrobras 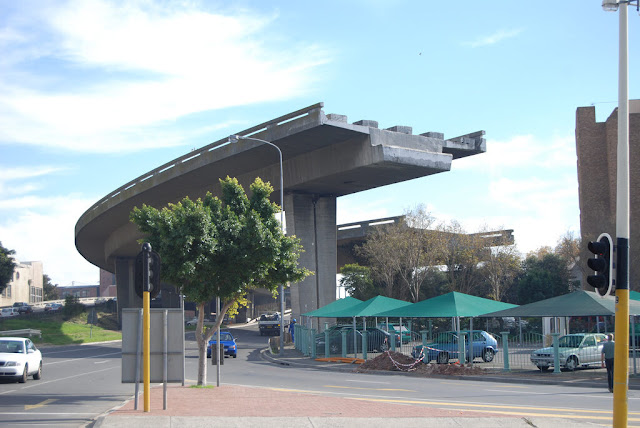 Cape Town’s “unfinished bridge,” was part of a big infrastructure project in the 70s that was to precent traffic congestion in the years to come, and so a ring highway was suggested as a solution to foster better traffic flow with as little disturbance as possible. The construction stopped without any clear explanation in 1977.
https://www.atlasobscura.com/places/foreshore-freeway-bridge
at Wednesday, November 24, 2021