I agree with this, and posted about this same situation a couple years ago when the BLM protest in San Diego shut down interstate 5. 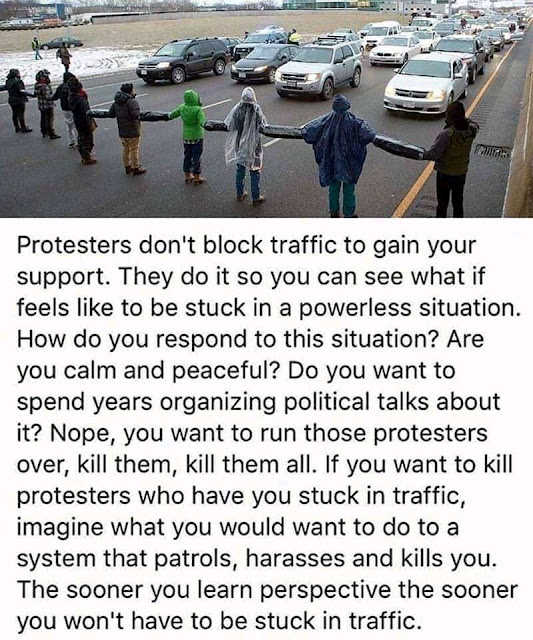 To have an effective protest, you have to get the people running the government to notice there is an outrage at the way they've allowed the govt to operate. Yes?

You must get the people who can solve your problem, elected officials, realize they have allowed a problem to continue, while they were playing golf, and having lunch meetings at the country club.

So, to get your protest heard? You must be protesting effectively. A sit down in the park? Isn't going to do a thing. 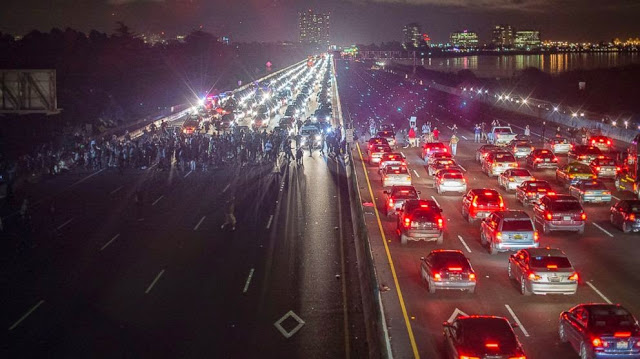 Shutting down a freeway, gets everyone in their cars to call the press, the police, and maybe their mayor or city council member.

Probably only the press and police though.

But, the police will likely have to make a note in the days report of what occurred, and give that to the mayors office.

If you don't think that blocking roads is effective, ask Hawaiians https://justacarguy.blogspot.com/2019/06/well-heres-some-weird-news-state-parks.html

And if your protest was ineffective (Minneapolis I-35, July 2016) like the Coalition to Wake Your Ass Up, condemning the ongoing killing of black lives across the country.

It would be a shame if protesters started wearing safety glasses, hard hats, respirators, and gardening gloves, all of which can be found at the same hardware stores as the plywood. It would be a shame if they started using traffic cones (the kind without the hole in the top), upside-down buckets, or other improvised lids to contain tear gas by placing them over the canisters.

It would be a shame if protesters used water balloons filled with paint that sticks to plastic, like police helmets, so police had to remove their helmets.

It would be a shame if protesters brought nuns, clergy, lawyers, and their mayor - to the protests. Also, people in wheelchairs. Grandparents. Doctors and nurses.

After all, a peaceful protest shouldn't incite the police to arrest anyone exercising their right to free speech, and right of people peaceably to assemble, and to petition the government for a redress of grievances. That's literally the 1st amendment. Police will not understand that protesters have the right to say anything at all, free speech was the 1st thing the amendments were made to protect.

So, if you're going to protest, remember, the police do not understand that you have that right. Bring a lawyer, or the police chief to point this out to them.

And you must petition the government for a redress of grievances. So, bring along a petition, get people to sign it, have it addressed to the govt official of your choosing, like, the mayor or governor.
If you know some law professors, ask them to help you out.

Remember that police will want to drag out individuals from your protest, and thin out your herd. So, rope yourselves together, in simple slide loops that tighten the more they are pulled on, use your lined up group of protesters to exert a greater force to keep the selected individuals in your protest line.

Study the many ways the Hong Kong protesters adapted to police and use the Hong Kong countermeasures, like, umbrellas, buckets, gas masks, face shields found at car parts stores, etc. Don't bring YOUR expensive smart phone, bring a burner phone. During a melee, or if you're arrested, a smart phone will get broken, a flip top burner phone will do fine, as you WILL need to make phone calls during or after the protest

Maybe, even get smart and plan ahead, and use cars and trucks to block off your area so police cars can't get close. After all, this worked for truckers having their protest in Washington DC in 2018. https://justacarguy.blogspot.com/2018/10/truckers-had-protest-called-black-smoke.html
Or tractors full of manure, like in France  https://justacarguy.blogspot.com/2018/03/it-only-cost-about-1500-to-let-city.html
at Thursday, June 04, 2020