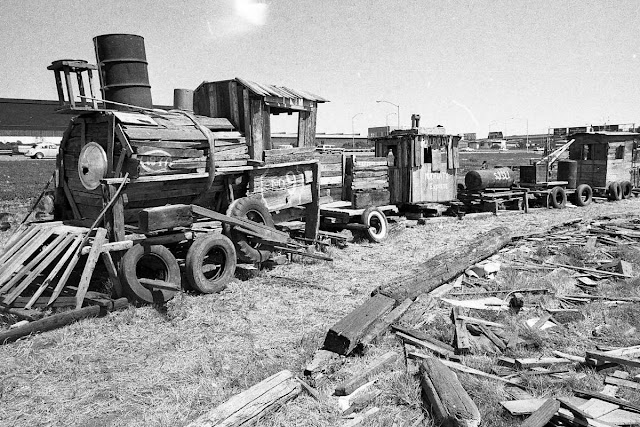 The sculptures started going up in 1960, when a class from the California College of Arts & Crafts set out to build something from the driftwood on Bay Farm Island, near the Oakland Airport.

“The first derelict sculpture expedition set out on a Saturday morning in 1960, armed with what were considered necessary tools: hammers, saws, hatchets, ropes, a bagful of various-sized nails and several cases of beer,” William Jackson wrote in The Chronicle on Feb. 7, 1965.

“The pictures really excited me ... turned me on!” he told Jackson. “I wanted to try something like it, and I knew just the place, the Emeryville mudflats.”

A decade later, in 1998, the derelict art gallery reached the end of its run — and the mudflats would get more thorough cleaning.

Caltrans used a helicopter to haul out 80 dumpsters worth of trash from the mudflats — plastic and glass bottles, rotting wood ties, creosote-soaked utility poles, a number of grocery carts — along with the remnants of dilapidated driftwood art.