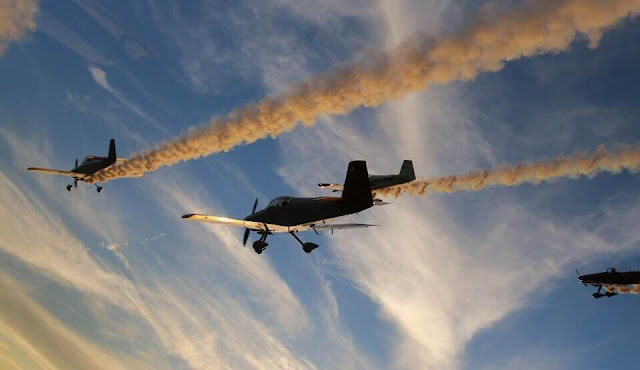 As part of the huge buildup to the nearby Kansas City Chiefs NFL game (they won and were 6-0 for the season) a mass formation of 49(!) KC Flight Formation Team Van’s RV kit build aircraft flew low over Arrowhead Stadium trailing pink smoke.

The game against the Oakland Raiders and the flight were part of a Breast Cancer Awareness campaign (hence the pink smoke) raising something like $30,000 for the cause. The crowd at the game broke the Guinness Book of Records for the loudest crowd roar at an outdoor stadium at a whopping 137.5 decibels! The flyover of 49 Van’s RV aircraft is also believed to be a world record for the largest ever civilian formation flight

Organizers also made a phone call to the Guinness Book of World Records regarding the flight.
"The Guinness world record was set in 2009, with 37 aircraft in Oshkosh Wisconsin," Lame said. "I think we're going to really beat the record really badly, with 49 aircraft it should not be a problem."

The decision to participate was also pretty easy for pilots all over the country.

They flew in from 19 different states to be a part of this record-breaking flyover.