'66 Coronet bought on craigslist for $900 in Kentucky became this kick ass vintage speed parts display of mid-'70s street racer vibe: everything on it is over 40 years-old. I love the Fenton slotted mags 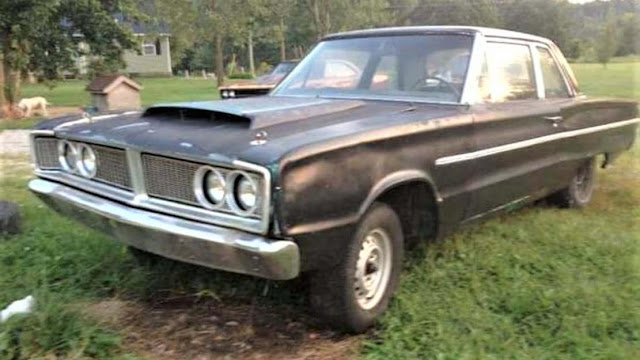 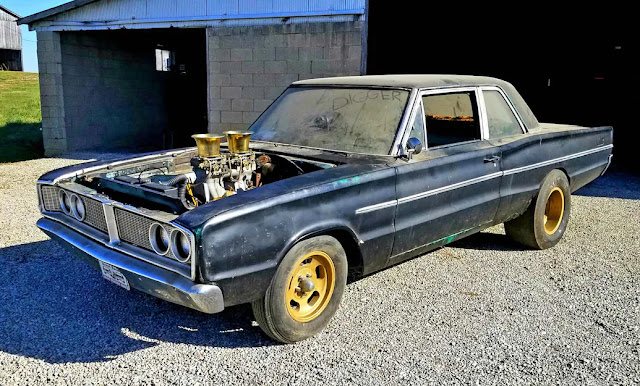 The wheels set the stage for the gold. They're new old stock. I got them from a gentleman who bought 'em brand-new in '70 to put on his Dodge Dart, and the Dodge Dart got wrecked and he never used the wheels. My buddy got the wheels and decided to paint 'em gold for whatever reason. I saw 'em, bought 'em, and we radiused the wheelwells. I knew what size tire I wanted and knew the spacing I wanted. I went searching for velocity stacks at a local swap meet and found a gentleman that had 'em. I bought about 15 velocity stacks from him for 15 dollars."
The tires on the Gold Digger Coronet, like the other parts on the car, are vintage items that Shane sought for their hard-earned patina (Shane says these are only for shows, and adds, "The next thing that I want to do is put some better tires on it and get it where it runs good enough where I won't embarrass myself on the dragstrip. ").
Shane explains: "I just wanted old Firestones and I couldn't find any of them so I just went with the Mickey Thompsons because they been around forever and I wanted to find some that was wore-out, dry-rotted, cracked, you know, just roll-around tires. And I wanted Moroso front tires. They're 7.10 Morosos and, same thing, I wanted old, cracked, just lookin' like they been on the car sittin' in the barn. I wanted them old."

Ninety-nine percent of the bolts that are in that car came out of a 5-gallon bucket full of shop bolts bought at a yard sale for a dollar, 'cause I wanted to use greasy, dirty, rusty bolts. I didn't want to use new bolts on that car. I wanted it to look as authentic as possible.
https://www.motortrend.com/features/1966-dodge-coronet-2-door-sedan-gold-digger
at Wednesday, November 23, 2022