a Gramm-Bernstein logging truck on a plank road, with a big log on back 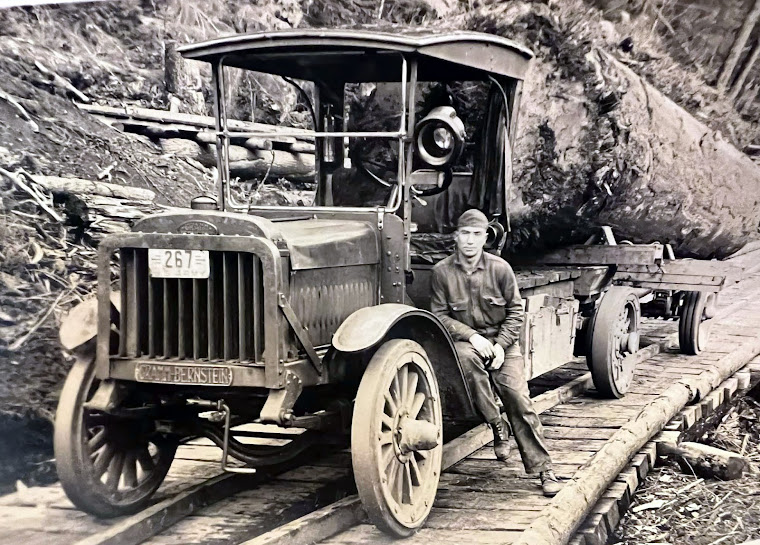 They were an automobile company in Lima, Ohio, an early manufacturer of power wagons and advertised 1, 2, 3, and 5 ton models with "any style of body desired". Vehicles were sold through the Willys-Overland Motors.
From 1930 to 1935, the Ahrens-Fox Fire Engine Company of Cincinnati, Ohio, had been building its smaller fire engines on chassis made by LeBlond-Schacht Truck Company, also of Cincinnati. But by 1935, Depression-weakened Ahrens-Fox owed Schacht so much money for chassis already supplied, that Schacht refused to supply any more truck chassis to AF. Ahrens-Fox the turned to Gramm Trucks of Lima, Ohio, to supply radiators, hoods, and fenders for its smaller fire trucks. Schacht Trucks bought-out Ahrens-Fox Company in 1936, and AF again began to build fire engines on Schacht chassis. But the Ahrens-Fox with Gramm sheet metal continued to be available until 1939.
https://en.wikipedia.org/wiki/Gramm-Bernstein_Company
https://www.facebook.com/photo/?fbid=10159405316092055&set=pcb.1224902274757359
at Tuesday, November 22, 2022