five B-24s, the largest underwater aviation discovery Project Recovery has made to date, resulted in positive identification of three of the bombers, which are associated with 23 crew members who have been MIA since World War II. 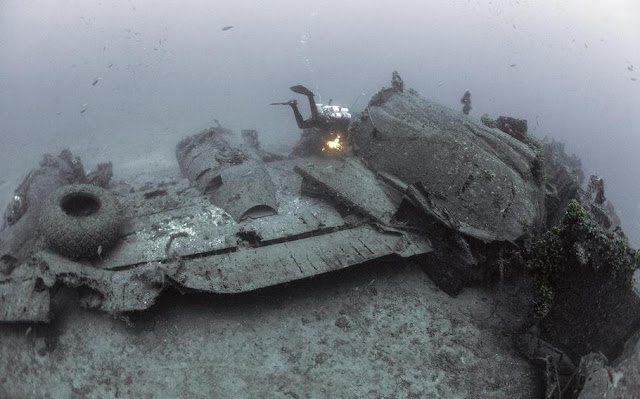 Project Recover in partnership with the Scripps Institution of Oceanography, the University of California-San Diego, the University of Delaware, and the Defense POW/MIA Accounting Agency, searched a 24 square mile area near Croatia, in August 2022
https://www.udel.edu/udaily/2022/october/project-recover-missing-b-24-bomber-aircraft-adriatic-sea-croatia/
The wrecks of an estimated 30 U.S. warplanes are believed to lie submerged in what was a frequent “ditching area” for crippled warplanes in the vicinity of the search area in the Adriatic Sea, which lies between Italy and the Balkans.

“Most of those aircraft took off from Italy and would bomb Europe,” Moline said. “Then, if they were attacked and limping and couldn't make it back to Italy, they didn't go directly back across the Adriatic.”

Instead, the pilots flew down the coast of what was then Yugoslavia – now Croatia – and ditched the aircraft in waters not controlled by the Nazis, Moline said.
The wrecks were found in waters roughly 300 feet deep, which is near the safe maximum depth for divers, Moline said.

Searchers were surprised to find the aircraft with largely intact engine cowlings, propellers and wings.

DPAA sponsored the mission, which was part of the agency’s larger innovation effort to develop new technologies for locating the sites of submerged wrecks, Moline said.

This was the first mission in which Project Recover integrated a suite of instruments that included a side-scan sonar, magnetometer and a high-resolution video camera onto a single autonomous vehicle, Moline said.
https://www.facebook.com/dodpaa/
https://www.science.org/content/article/can-floating-dna-help-recover-troops-lost-long-ago-sea
https://www.stripes.com/theaters/europe/2022-11-20/missing-b-24-bombers-world-war-ii-8130062.html
https://www.dpaa.mil/Portals/85/Documents/Newsletters/YiR%202021%20Web.pdf
at Tuesday, November 22, 2022