please, everyone stand, and bow toward Illinois, and say "Hail Chuck!" because, not only does he do cool things like reunite Gus, who just had a couple strokes - with his supercharged 59 Apache, the other reason is that his business card says he is an emperor, and I het a kick out of that too

Gus had not seen his truck for 8 years, simply had lost track of it and the friend who was supposed to help get the supercharger up and running.
Probably because he has had two debilitating strokes that have left him paralyzed and now in hospice. He couldn’t say anything or make any motions when the above hauler brought his truck home, but his tears (liquid horsepower released by reverse osmosis no doubt in my mind) spoke volumes. 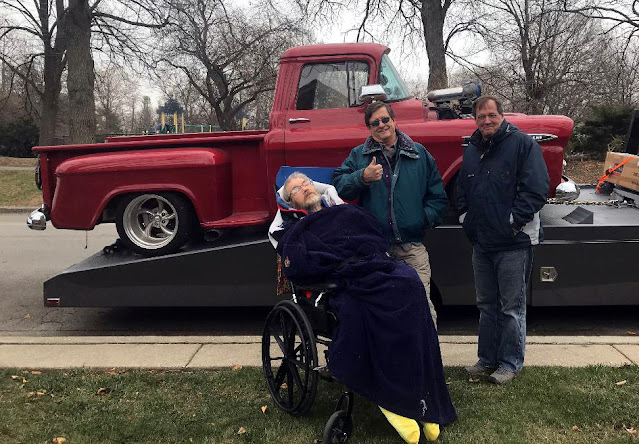 that's just one reason Chuck is a hall of famer, and the first guy I go see and catch up with at SEMA every year.
Another reason is that Chuck is a great guy, and regularly gets companies to donate parts so a hot rod can get built, then auctioned, to raise funds for charities
Plus, he makes an incredible booth every year for the Absorber company
at Thursday, December 17, 2020