You can learn a lot if you have the time to do your family tree... and then risk wasting time trying to see if those last names that show up, are indeed connected to the people that made them famous. So, here's some famous people I learned I'm distantly related too 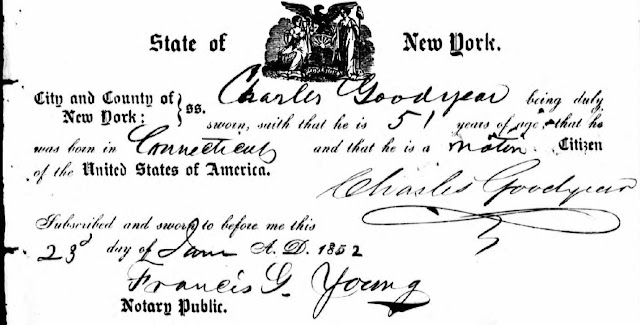 Charles Goodyear, inventor of the rubber vulcanizing process (or he gets the credit for using it to make long lasting tires anyway, lets not quibble)

If you are American, as most of my readers are, and do your family tree, you will probably find similar results as long as you get back to the 1600s and look at the last names of the colonists, and then try and think of the famous people with those names. But it takes a lot of time.

After you think you've got a famous last name picked out, then you have to go to Wikipedia to get their birth and death year, and parents names, and then take that info and plunk it into Ancestry com or whatever other genealogy website you're using, and then see if you can work their family tree back far enough to see if it connects with yours.

It's very time consuming, and often you find that they changed their last name, or came to America a lot more recently and are not related to your ancestors that  immigrated here since the 1620s 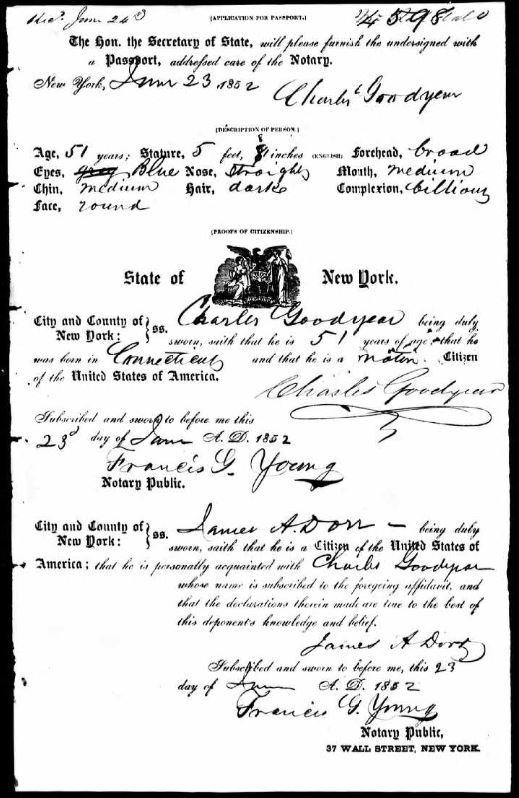 I was doing my family tree mostly because neither my moms side nor my dad's side had done one, but I share a birthday with a great aunt that was doing her family tree the hard way, back before websites made it something you could get done from a laptop. She did it the old fashioned hard way, and was incredibly thorough. The problem was, there was no help when she ran out of leads, and with ancestry, there are all the data points other people have entered, and all the census reports, and marriage certificates, birth certs, gravestones on another partner site, etc. The total amount of info is stunning. There are thousands of church books covering the weddings, christenings, etc, thousands of genealogy books, history books, etc that have all been scanned it and searches work all that scanned text for name matches. By the way, a 6 month subscription is 100 dollars, and it's worth it. If you know that someone will use it? It's a most incredible birthday or christmas gift.

Ancestry com is frustrating in a couple ways though, and could be greatly improved if they would add a place for a description of each person's life achievements. Like, WW2 vet, Mayflower passenger,  or connection to famous people like relative of a president, company, etc.

And for pete's sake, if they would improve the family tree graphic so in a glance you could simply move through a family tree to see who and when, and claims to fame... the situation they have is two or three decades old in computer graphics and useless for scanning.

As finished products go, it's maybe half as useful as it could easily be if they reinvested the subscription fees to improving the product.  Imagine if all you needed to do was to enter your grandparents names and birthdays, and the family trees that applied would simply pop up for you to choose from. They ain't even in the ball park yet. It's like using myspace instead of facebook, hand signals instead of a phone.

I'm done with the rough draft and research of family trees, beginning with each of my 4 grandparents family trees.

On the other hand, other people researched all the way back through the vikings to Odin and Frigg (Thor's folks) and every Viking generation, as well as other research into the entire Roman Empire generation, and emperor... other people researched every impossible to pronounce Welsh clansman, every French aristocrat, every knight, duke, earl, king, queen, empress, emperor, Czar, Scottish Clan chief, Irish clan, every German clan chief, every Norman, Saxon, Goth, Ostrogoth, Vandal, Briton, Merovingian, Burgundians, Austrasians, De Lyons, Bourgognes, Lombardys, Vermandois, Franks, Druids, Jews, Italians, Russians, Pilgrim, Puritan, Huegunot, Quaker, Mennonites, Palatines and other colonists. I did the Salem Witches, the minutemen, revolutionary war vets, battle of Bunker Hill and Lexington, Timothy Lockwood suffered throught the winter at Valley Forge, French and Indian war vets, the Indian wars, the Indians (yes, we are descended from Mohawk too) War of 1812 vets, Civil War vets (a doozy of a story in their of Benjamin Schofield, and his rifle that is now in the Ypsilanti county historical society museum, see attached news article) 1894 Spanish American War vets, WW1 and 2 vets. No, I didn't do Korean or Vietnam or gulf war.

I can tell you how many Mayflower passengers I'm descended from, (and Speedwell!) and a couple dozen other ships our ancestors sailed across the Atlantic on. Noe a single Ellis or Staten Island immigrant though.

I can tell you which Presidents I'm related to, and how, and which celebs, but there are very very few. Maybe just Lucille Ball and Sandra Bullock, but when you can ignore the rest of Hollywood assholes, and just admire those two? We got it made. I am are related to the Bloomingdales, Van Burens, Benedict Arnold, Lizzy Borden and also the Borden Condensed Milk creator, William Tecumseh Sherman, Bushnell that designed the first submarine, and his descendant the maker of binoculars, Sir Isaac Newton, Noah Webster the creator of the American dictionary, Johns Hopkins, the dutch that settled New Amsterdam (New York City), Baldwin pianos creator, JP Morgan, the president of Studebaker (Albert Erskine), Ben Franklin, Charles Goodyear, Glenn Curtiss, George Ferris, the Wright Brothers, Henry Studley (ever heard of the Studley Toolchest? It's a legendary piece of art http://justacarguy.blogspot.com/2020/06/have-you-heard-of-engineers-tool-box.html if you didn't know, my blog is http://justacarguy.blogspot.com/ and that is why you might see a lot of links to that site. ) and Fayette Plumb (among the 10 largest American tool companies ever, but it's not PLVmb, that's a different tool company. Plumb made striking tools, axes, hammers, picks ((supplied the US Govt during WW1 with picks and shovels and made the trenches)))

I've been working on this family tree so long I've forgotten most of the interesting stuff, but Marcus Aurelius is in the tree, Caesar, Cleopatra, kings and queens from every country in Europe (way way back when) the guy that got Russia organized back around 900AD, Noah, Adam and Eve, old man Methuselah, again, if you believe in that religious stuff, the guys that fought in the Crusades, and which crusades, Charlemagne and every other ruler of Europe, the guys that signed the Magna Carta, the knight of the garter, the knights of the rose, bishops, saints of stuff like brewing, I kid you not, sheriffs of Nottingham and all the Robin Hood villains (they existed, his gang didn't)

I'm related to Horton (of San Diego fame, if you've been here, you might recall Horton Plaza downtown) and a Supreme Court Justice, some early RI governors, and CT governors, and several guys that signed the constitution and the Declaration of Independence.

There are about 250 pages of the deep into history stuff, and 38 pages of just those from about 1550 until my paternal grandparents.
at Thursday, June 25, 2020