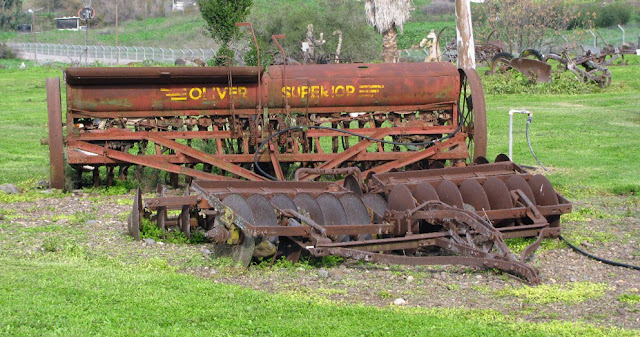 James Oliver was born August 28, 1823 in Liddesdale, Scotland the youngest of the nine children of Mary Irving and George Oliver. His family was Presbyterian and James was taught to read and write in a local church. His father was a shepherd but found it difficult to earn an income to support his family. An outbreak of cholera in 1832 killed most of family flock, and George injured his leg the following year making it difficult for him to walk. The family's oldest sons immigrated to the United States in the following years and prepared a home for the rest of the family to join them in 1835. There the family worked on a farm near Alloway, New York that had been purchased by the sons.

Oliver took a job working on nearby farms performing manual labor and becoming acquainted with field plowing. One of Oliver's sisters married to a pioneer who moved to what would become LaGrange County, Indiana. In 1836 James and some of his siblings traveling to live with them on their homestead. The family home was near Mishawaka, Indiana where a large bog provided an abundance of iron. A number of foundries and iron works were being built in the area and Oliver took a number of jobs working on construction projects. He briefly attended George Merrifield School where furthered his basic education. He took a job at South Bend Blast Furnace Company in 1839 where he first learned how to cast iron.

James Oliver started the Oliver Chilled Plow Works in 1853. In Mishawaka, Indiana in 1836 where he worked in a foundry. Later he bought into an already existing small foundry in South Bend, Ind. Plows with cast iron bottoms and moldboards had been successfully used by farmers and planters in the eastern states of the United States since the time of Thomas Jefferson.

However, in the sticky soils of North Dakota and various other portions of the Midwest, the cast iron plows would not "scour"; that is, the sticky soil would cling to the plow, disrupting the flow of soil over the plow's surface, making plowing impossible. Thus, when settlement of North America moved over the Allegheny Mountains into the Midwest, there was a real need for a new plow that would scour in the soils of the Midwest. To allow a cast iron bottom to scour in sticky soil, various methods of heat treating for creating a hardened surface on the metal plow bottom had been attempted. All of these processes failed because the hard surface created was very thin and would soon wear through to the soft iron under the heat-treated surface. James Oliver developed his sand casting process to include rapid chilling of the molten iron near the outside surface of the casting, which resulted in a bottom that had a thick hardened surface with far greater wearability than competing plow bottoms.

The entrance to the Oliver Chilled Plow Works in South Bend, Indiana, c. 1880. Another problem common to cast iron plow bottoms was the lack of soundness and uniformity in the metal's molecular structure, which meant that some cast iron bottoms would have soft spots in the hardened surface, reducing the wearability of the plow bottom. Improvements made by James Oliver to his casting process overcame this problem also.

Consequently, on June 30, 1857, James Oliver obtained his first patent from the United States government for his chilled plow shares and in February 1869, he obtained another patent for his process. What Oliver accomplished by this invention is sometimes referred to as chill hardening, or simply chilling. The purpose of chilling, whether it be a plowpoint or a wheel for a railroad car, is to produce an extremely hard and durable exterior of the object. This is done by including "chills", pieces of metal, into the sand mold, such that when the molten iron is poured into the mould, the portion next to the chill cools rapidly, hardening in a way akin to quenching. This chilled area forms the exterior of the plowpoint. This metal cools more quickly than the metal which forms the other portion of the plowshare, and effectively becomes case hardened. Also, the vapors which arise as the molten metal comes in contract with the mould are expelled through a spout. Had these vapors been trapped in the mould, they would have caused impurities and would have weakened the plowpoint at the place where it should have been the hardest. To harden the plowpoints, Oliver arranged his moulding apparatus in such manner that the surface of the chill was in a position so that the melted metal first came into contact with the chill at the edge of the plowshare. This insured a hard plow cutting point.

An artist's conception drawing of an aerial view of the Oliver Chilled Plow Works, South Bend, Indiana, c.1900. Thus, James Oliver's chilled plow bottom became a practical success and on July 22, 1868, the Oliver's business was incorporated as the South Bend Iron Works. In 1871, the company sold 1,500 plows per year. By 1874 this figure had increased to 17,000 plows a year. At the time of death of James Oliver in 1908, the company had again changed names to the Oliver Chilled Plow Works