some people are very serious about bicycles, and some rare few are extremely serious, with a silly goofy wonderful personality. Norman bought a truely incredible "Norman" brand bicycle with only 3800 miles on it 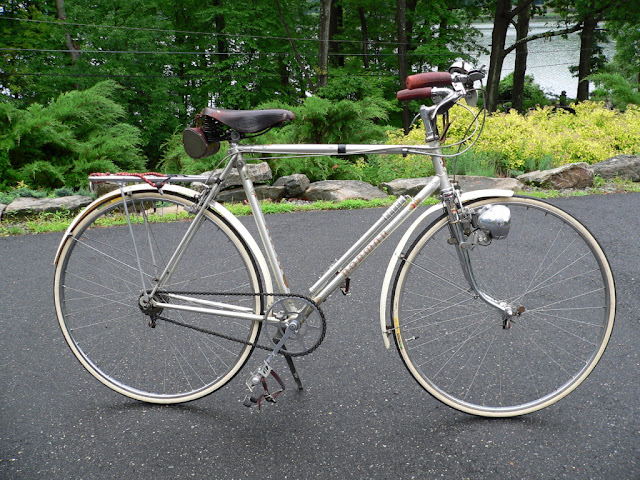 this bike was listed and located, then due to the location it was given a hand off assist (the story is a hoot!) to go and get it, and it has a marvelous originality that indicates a great love of it by the original owner who kept it for about 60 some years:

I was contacted by (the buyer) with the universal C and V (not sure what that is from the context, but it must be a bikers code for I need another biker to help me) SOS signal, which the code dictates I heed. I could sense (the buyer's) excited anticipation. Who wouldn't want to participate in the hunt? It's in the blood!

On initial phone contact, the seller told me the bike was being offered first come, first served. Not wanting to drive 100 miles for nothing, I stated my definitive intentions to buy, and was promised the bike. I headed out into the driving rain, kids in tow (they need training in the field, no?), to arrive there exactly when the seller stated he'd be home.

I arrived early, before the seller. The rains had stopped, always a promising sign. The seller rolled up, took a look at me, then headed to the shed without a word. He rolled the Norman out, and I thought this couldn't be the bike. I was prepared to find frame damage, missing parts (he claimed it to be all original) or some other compromises. I looked at the SA hub. '49? It couldn't be, it was pristine! I began to have sinister thoughts, thoughts that violate the sacred code. The seller told me it was his father-in-law's, that it could sell for $1000 (well, perhaps that's a stretch?). He suggested I tell (the buyer) it was sold. No, banish the thought!

I was a bit nervous about the ride home. The rain was starting up again. I had brought a tarp and plastic covering for the saddle, as the bike would by carried on a rear car rack, but it could protect only so much. It's likely that's the only rain to ever touch the bike. At home, the kids and I spent an hour with towels and a hair dryer. It was a labor of love. 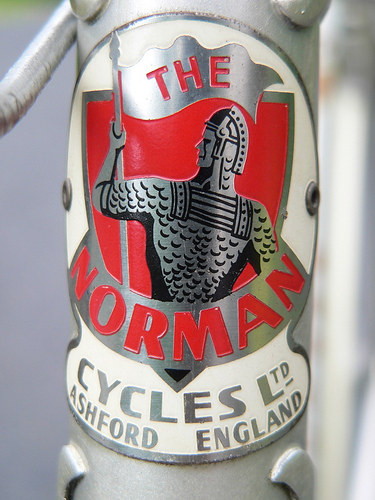 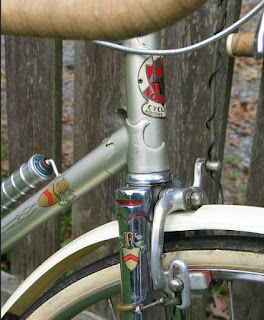 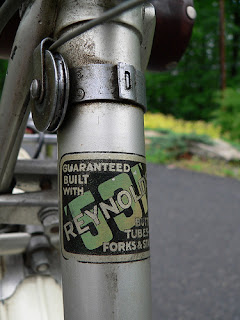 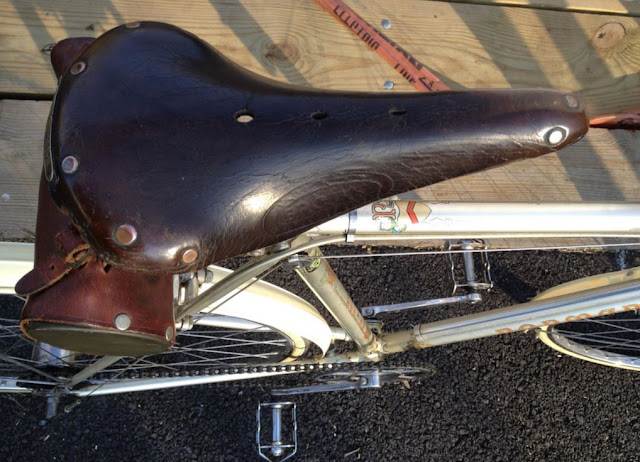 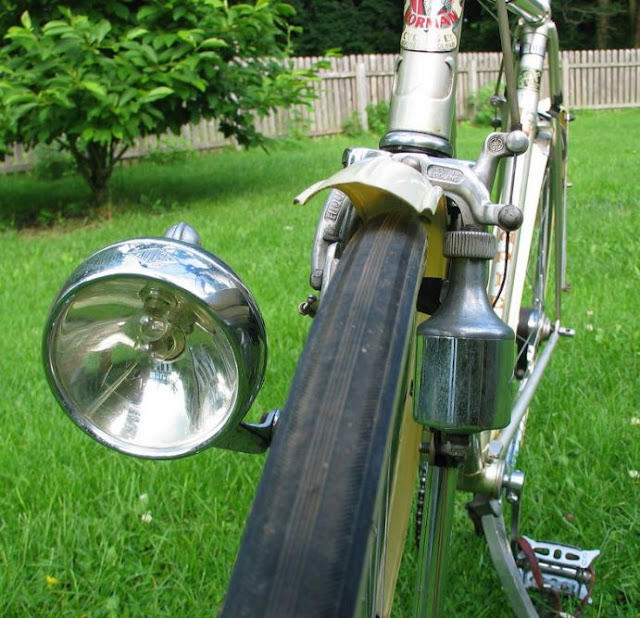 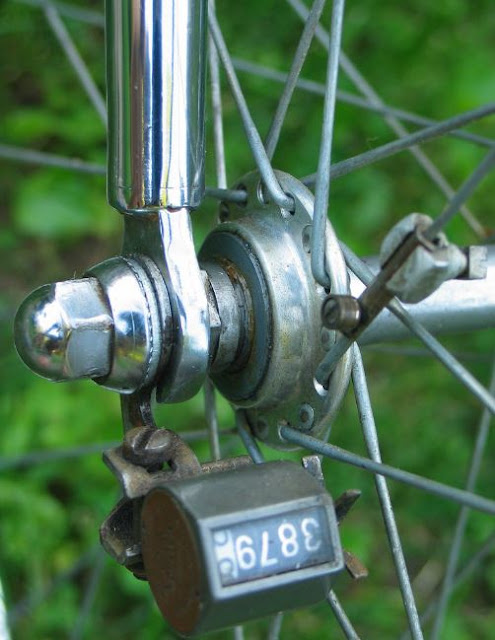 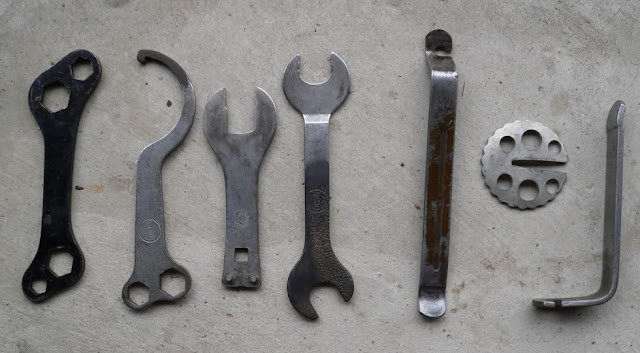 Now that is pretty cool, but then, he found the bike was a bit too small for him, and so he passed it on to another enthusiast


sadly, I have sold the Norman Rapide. As I knew all along, the frame was too small for me, and since I have picked up a Raleigh Record Ace that fits much better, I wasn't riding the Rapide any more. And it is just right for the buyer, who appreciates this type of bike fully as much as I. So... it seemed the right thing to do.

I will now let the new happy owner gloat...

As with other things related to my bicycling hobby, it all started out innocently enough... Back in January after facilitating a bicycle purchase for fender1, I needed to transport a bike to Philadelphia. Since I was pretty close to NJ, it was decided that I'd catch up with rhm to do a ride with him and a couple other forum members. At some point in the day there was a conversation that went something like this:
rhm: 'I have a bike that would be perfect for you.'
me: 'Really, what's that?'
rhm: 'My Norman Rapide.'
me: 'Hmm, sounds intriguing. Is there a thread about it on the forums?
rhm: 'Sure.'

Upon my arrival home and taking my Peugeot off the car and moving it into the house, I went to my computer and proceeded to google the term "norman rapide site:bikeforums.net" and the first hit was this very thread. I was so excited that, while I didn't get excited enough to pee my pants, I was sufficiently excited to call my wife into the room and show her the thread and started smoothing the way for her acceptance of another bike into the house.

A short time later, in mid February, rhm mentioned he was going to be in my area, so I asked him if he might be able to bring the bike down with him let me see it and take it for a ride. He stated that he'd have room to bring it down, but probably wouldn't have sufficient room to take it back home. Later that evening we had spoke on the phone and somehow I convinced him to bring the bike and leave it with me. Mind you, rhm and I had only met a few months earlier at the Trexlertown swap meet and then again at the ride in January where he mentioned the Rapide. Now that's what I'd call trust!

On the day and time that rhm indicated, I met him at the prescribed location where, upon arrival, the bicycle was already out of the vehicle leaning against the bumper. I got out of the car, exchanged pleasantries with rhm and he introduced me to his daughter who, evidently having seem rhm in bike-geek mode enough over the years, proceeded to ignore the conversation as I oohed and aahed over the bike, and rhm waxed poetic over the finer points of the bike. Since rhm was in a hurry to get to his destination, I loaded the bike on the car and headed home while he proceeded on his trip.

Upon my arrival home, I unloaded the bike and took it for a ride. Frankly, the first ride was a bit tentative because I was a) worried about crashing the bike and b) thinking how I hadn't ridden a drop bar bike for several months. I could tell the bike had a lively ride with light responsive handling but, while the first impression was positive, I was reserving final judgment after more seat time. After my second ride I was still getting accustomed to the bicycle, but the third ride which was just short of 30 miles, I decided that I wanted the bike. I was no longer going to wait for rhm to tell me how much he wanted for the bike. It was time for me to take control of the situation and make an offer on the bike. After considerable haggling (actually that's a lie), we arrived at a price that was fair to rhm and even fairer to me, if you can imagine that!
at Thursday, March 02, 2017