Boom Supersonic, setting out to build and test planes to succeed at less than ridiculous prices for mach 2 flights across oceans (most countries have banned supersonic commercial airline traffic overland) 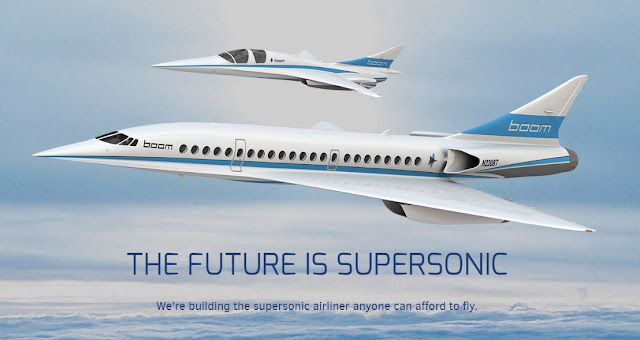 Virgin has also signed an option to buy 10 of the planes to hopefully reintroduce 3.5-hour passenger flights between London and New York 13 years after Concorde was decommissioned.

The Spaceship Company will provide engineering, design and manufacturing services, flight tests and operations and Virgin have an option on the first 10 airframes.

Virgin is partnering with a pilot and former Amazon executive, who is building a prototype of the new jet, called Boom, in an aircraft hanger in Colorado. While several other companies, including Boeing and Lockheed Martin, are developing new supersonic jets Scholl said his plan is likely to beat them to market as it does not require any new technology that would need approval by regulators. It's all currently on the shelf parts.

“We are talking about the first supersonic jet people can afford to fly,” Scholl, the founder and chief executive of Boom, said. “You will be able to fly New York to London in three-and-a-half hours for $5,000 return, [which is roughly] the same as [the cost] of business class.”

“There is a huge market out there, more than 20 million a year fly business class internationally. We can take them to Mach 2.2 (1,451mph, and faster than Concorde which flew at a top speed of Mach 2.04) and save them half their journey time.”

Scholl reckons there is so much demand for faster international travel that affordable supersonic flights could become a $100bn market. He said his plane will concentrate initially on London to New York, San Francisco to Tokyo, and Los Angeles to Sydney.

But is this missing the obvious? We can video chat across the world with our cell phones. We no longer have to be in the same room to see and hear other people
at Tuesday, February 28, 2017