These are civil war vets. It's odd to think about the civil war, 150 odd years ago, and then realize the survivors lived into the 1930s.... 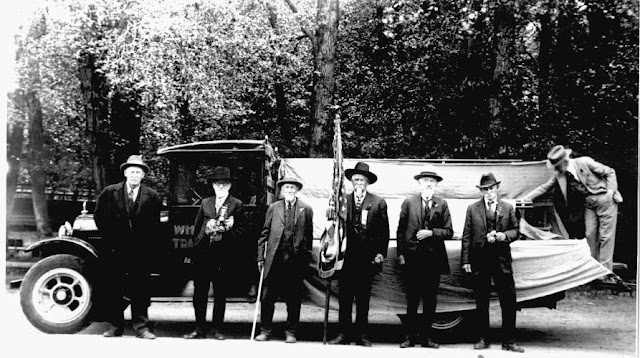 George Van Natta (by the front tire) was one of the best known Civil War veterans in the Ashland Oregon area, he was connected with the Ashland city police for a number of years and served as county road commissioner. He came west shortly after the end of the Civil War and for 40 years resided in Ashland, engaged in the fruit growing business.

When but 17 years of age Mr. Van Natta responded to Lincoln's call to fight for the preservation of the Union, enlisting in August 1862 in Company E. 99th Indiana Infantry, and serving under Sherman from the battle of Vicksburg to the close of the Civil War, participating in the Grand Review at Washington D. C., before President Lincoln at the close of the conflict.

Born In Tippecanoe, Indiana April 20, 1846, Mr. Van Natta was aged 85 years, six months and nine days at the time of his death.