air filter tester... who in their right mind would need such a thing to tell them a filter is so dirty it needs to be replaced? 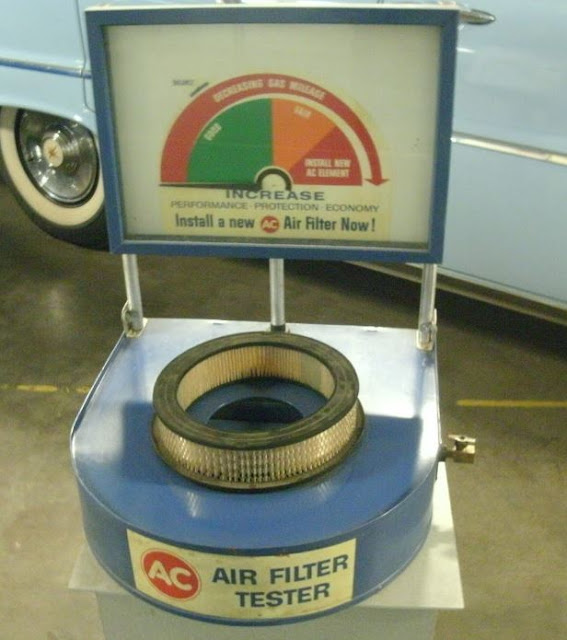 I wonder how dirty one could get without adversely affecting the engine performance?

Well, I can't find the note that someone sent me with the answer... and that bugs me, but they sent me a link to a PDF about testing airfilters scientifically http://www.fueleconomy.gov/feg/pdfs/Air_Filter_Effects_02_26_2009.pdf  which proved that fuel economy in new cars isn't affected by clogged filters. Old pre computer cars, they can't deal with clogged filters though

The goal of this study was to explore the effects of a clogged air filter on the fuel economy of vehicles operating over prescribed test cycles. Three newer vehicles (a 2007 Buick Lucerne, a 2006 Dodge Charger, and a 2003 Toyota Camry) and an older carbureted vehicle were tested.

Results show that clogging the air filter has no significant effect on the fuel economy of the newer vehicles (all fuel injected with closed-loop control and one equipped with MDS).

The engine control systems were able to maintain the desired AFR regardless of intake restrictions, and therefore fuel consumption was not increased.

I also wonder, if any junkyards ever went through the airfilters in the cars getting towed in and parted out, and looked for new, or really useful, parts like air filters that they could sell in bulk to places like used car lots, demolition derbys, or something