Transport for your competition cyclecars. 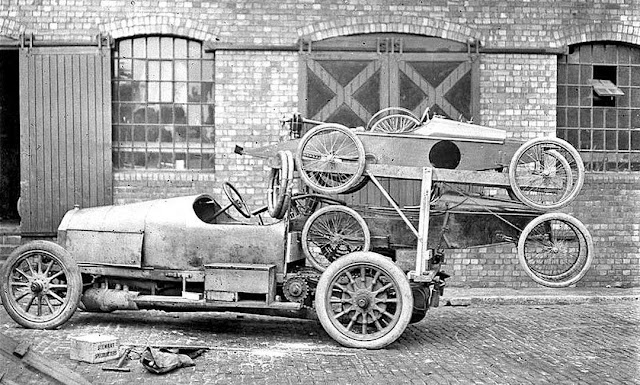 In the spring of 1914 the Carden Works in Somerset Road, Teddington assembled these cycle cars.

At this time Carden was taking class records at Brooklands, a mere fifteen miles away, in cars that had engines of 350 to 1000ccs capacity. They had solid rear axles with an inboard brake drum and externally-contracting brake band.

It was after many decades later that F1 designers agreed with this layout: recumbent driver, rear engine, monocoque construction.

Carden was a most ingenious and imaginative designer and worked in many fields. By the time he was making these monocars at the age of twenty, he had built his own aircraft and a working model of a tidal-powered generator for the Severn estuary.

Although he was a Baronet, he had no money and had to sell his designs to finance his next enterprise. Although he was a busy captain in the RASC during WW1, he found time to sell the cyclecar business including the Teddington factory to Ward & Avey, the car becoming the AV Monocar.