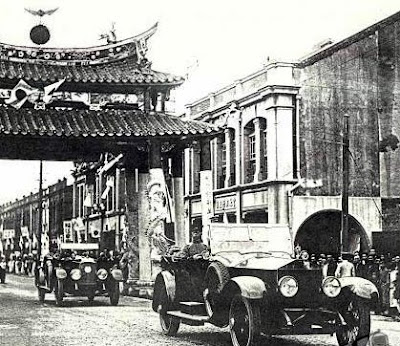 Discovered after many years in obscurity, even the experts did not know the whereabout of Emperor's Hirohito's first Rolls Royce Silver Ghost.Until now.The chance glimpse of the hand-written words 'Prince Regent' on one of 13 pages of original Rolls Royce build sheets, was the starting point in the remarkable discovery of this historically significant 'Lost Rolls'.
The flamboyant 'Maharajah-style' coachwork it sports today provided no clue to the real identity of this car, but accounts of the time and photographs found in the archive of the Rolls Royce Enthusiasts Club, put the identity beyond doubt. This was Hirohito's first Rolls Royce.Chassis Number 58 YG started life as a 1922 Rolls Royce Silver Ghost, with a touring body by Hooper. The build sheets record the presence of a high ratio back axle for touring coachwork. It was believed to have been ordered by Emperor Hirohito, then the young Prince Regent, while on his first overseas state tour, which culminated with a stay in England with the Royal Family, in 1921. Delivered in the following year, a contemporary advert in Japanese for Rolls Royce Agent Sales & Frazer proudly announced that they had delivered a Silver Ghost Tourer to the Imperial Household for the (return) visit of the Prince of Wales in 1922.
The condition of the car is remarkable, suggesting little use, perhaps only for state occasions. It still retains its original exhaust, for example, with the 'straight- through' exhaust valve still working. After-market 19in Alpine Eagles Brakes have been fitted, but otherwise, mechanically, the car is as described in the build sheets.
http://www.carandclassic.co.uk/car/C66109?pt=pf
at Friday, March 27, 2009