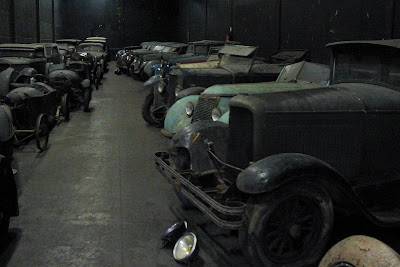 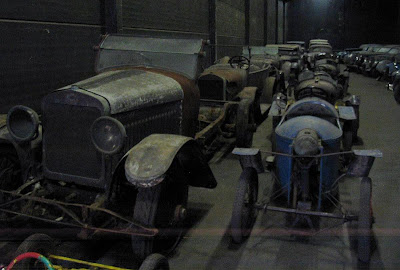 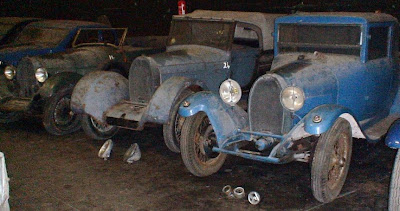 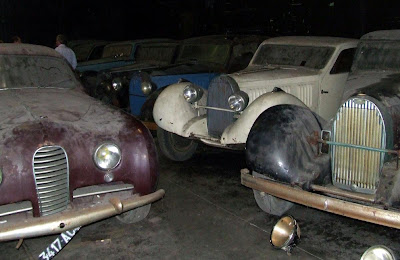 Over the years nearly 400 items (vehicles, chassis and engines) were acquired, A team of up to 40 carpenters, saddlers, and master mechanics were assembled to carry out the restoration work.
They were under a confidentiality agreement to keep their work and the scale of the collection a secret - a singlemindedness often referred to as "The Schlumpf Obsession." Many, including irate members of Bugatti clubs around the world, knew of the collection; although the eventual scale of the enterprise became a surprise to almost everybody.
In 1976 the Schlumpf brothers had begun to sell their factories. In October the Malmerspach plant laid off employees, and a strike broke out, with 400 police holding back the workers from ram sacking the Mulhouse plant.
After a stand-off, on March 7, 1977, textile union activists staged a sit-in strike at the Schlumpf offices, and broke into the Mulhouse "factory" to find the astounding collection of cars. An unrestored Austin 7 was burned and the workers' union representative remarked "There are 600 more where this one came from."
The Schlumpfs fled to their native Switzerland, and spent the rest of their days as permanent residents of the Drei Koenige Hotel. But with wages outstanding, the factory was occupied for the next two years by the textile union and renamed "Workers’ Factory." To recoup some of their lost wages, the union opened the museum to the public, with some 800,000 people viewing the collection in two years.
As the scale of the brothers Schlumpf debt rose, various creditors including the unions eyed the valuable car collection as a way to recover their losses. To save the destruction, break-up or export of the collection, in 1978 the contents were classified as a French historic monument by the Council of State. In 1979, a bankruptcy liquidator ordered the building closed.
In 1981 the collection, buildings and residual land were sold to the National Automobile Museum, now the largest automobile museum in the world . http://en.wikipedia.org/wiki/Mus%C3%A9e_National_de_l
62 cars of this collection from the Schlumpf collection were bought in 2008, and 12 will now be in the Peter Mullin Collection in Oxnard, in the former Otis Chandler museum, Otis Chandler’s collection is closed but to reopen soon as the “The Vintage Museum of Transportation”
http://www.bugattirevue.com/revue35/malmer.htm
The American Bugatti club is going to stop by the Mullin museum during their 50th Anniversary Celebration of the club and the US International 2010 Bugatti Rally.
Peter Mullin is a founding member of the Petersen Automotive Museum Foundation and served as Foundation Co-Chairman from 1994 to 2004.
http://www.worth.com/Editorial/Passion-Investments/Wheels-Wings-Water/Passion-Investments-Auto-Eternal-Combustion.asp
If you have a passion for Bugattis: http://www.velocetoday.com/archives/775
at Wednesday, March 25, 2009