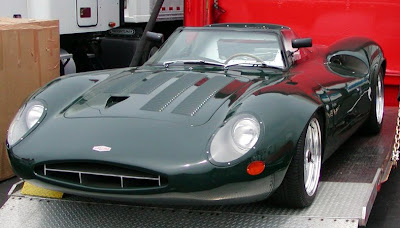 XJ13 was developed by Jaguar during the 1960's with the final prototype being finished in 1967, and carried Jaguar's first V12. The engine was remarkable in that it had twin overhead cams and mechanical fuel injection. Unfortunately, it was developed too late to be competitive and by late 1966 Jaguar was taken over by the British Motor Corporation (BMC).
According to http://www.conceptcarz.com/vehicle/z7339/Jaguar-XJ13.aspx the rules changed on the displacement of concept cars put the engine size down to 3 liters again.
The project was shelved and the XJ13 was put into storage. The next time the car was seen was in 1971 when it was taken to the MIRA circuit to make a promotional film for the official release of the V12 engine.
Unfortunately, a tyre blew on the steep banking of the MIRA track and on its first public appearance, the XJ13 was virtually destroyed.
Although the damage was extensive, Jaguar decided to have the car completely rebuilt. In the following years, the company's Heritage department showed the unique machine at various events both stationary and driving. At some point the healthier of the two engines was over-revved and destroyed. The second engine used a welded piston and could only be driven slowly. It was later rebuilt and is now on display in the Jaguar Museum in England.
Primarily developed to compete against the Ford GT 40's (which had won its first Le Mans in 1966 and went onto win the 1967 and 1969 races.) it had a top speed of 200 mph with more than 500 horsepower from a 5.0 liter V12, and high speed stability without wings.
http://www.ultimatecarpage.com/car/222/Jaguar-XJ13.html
at Friday, March 27, 2009