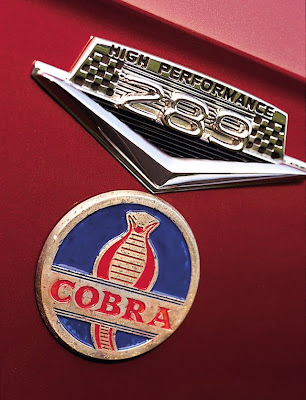 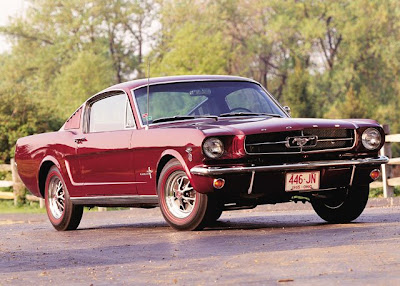 Herb's dad placed an order for this 2+2, optioning it with the solid-lifter 289 High Performance and the accompanying mandatory (at extra cost) four-speed manual gearbox. He finished off the drivetrain with a 3.50:1 ratio in the 9-inch axle that was exclusive to the Hi-Po.

Then he never titled it, only drove it 2,847 miles, then parked it...
in a shed.
He never titled it because he was a used car dealer and just put dealer plates on it.
Herb's dad Bob also did careful shopping in the dealer-option Cobra Kit catalog. In the looks department, Bob opted for the Cobra Engine Dress-Up Kit, comprising finned-aluminum valve covers, a chrome radiator cap, dipstick, master-cylinder cap, oil filler cap, and air-cleaner assembly.
But this shiny breather was soon rendered useless by Bob's second, and more important, addition: the Cobra II 4-V Induction Kit that provided a cast-aluminum intake manifold mounting a pair of 500-cfm carbs topped by individual chromed air cleaners. The $245 carb kit also included a pair of Cobra medallions (as found on the nose of Shelby's AC Cobras), which Bob soon mounted beneath the 289 Hi-Po badges on the front fenders.
As a car dealer, Bob Gordon couldn't afford to lose his driver's license. So he parked his nearly new fastback with only 2,847 miles showing on the odometer and never drove it again. Also, because of his dealer status, he never bothered to have it titled.
http://www.mustangmonthly.com/featuredvehicles/173_0310_1965_ford_mustang_hi_po_rare_classic_car/index.html
Side bar: this Mustang is so low mileage that it's a restoration resource 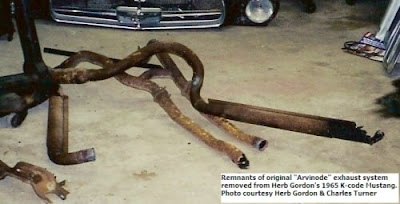 This is the rare and just being reproduced “Arvinode” exhaust system.
Mustangs built from October, 1964 through March, 1965 with High-Performance 289 "K"-code engines were equipped with a unique dual exhaust system. Originally produced by Arvin, the system did not utilize conventional mufflers; instead, the exhaust note was “tuned” by combining the effects of resonance tubes in the front “mufflers” with conventional resonators integrated into the tailpipes. The sound was unique; low, aggressive and loud. And it increased peak torque and horsepower.
http://www.waldronexhaust.com/arvinodedualexhaust.htm
If you are wondering like I was, what is the "2+2" about: http://justacarguy.blogspot.com/2008/03/ever-wonder-what-mustang-or-pontiac.html
at Wednesday, March 25, 2009