the POTUS is really proud of riding a lot of trains, too bad he told a story about that, and demonstrated either dementia, or Alzheimer's, cause he didn't get much of the story right. But, he's damn happy about trains 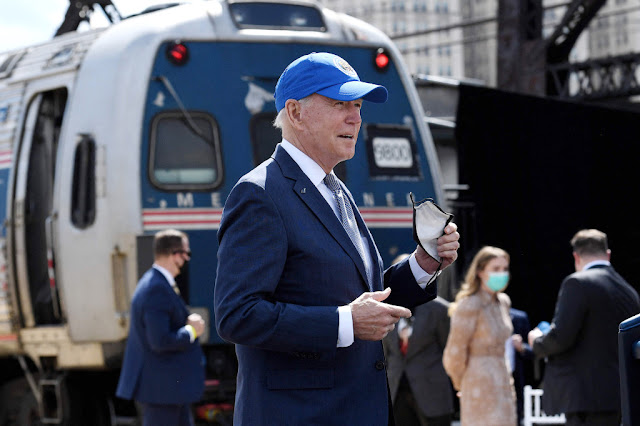 President Biden appeared to go off the rails with a heartfelt story about reaching 1.5 million miles on Amtrak and being personally congratulated by a conductor — after it emerged the Amtrak worker actually retired some 20 years before his story took place.

Speaking at an event in Philadelphia commemorating the 50th anniversary of Amtrak Friday, Biden — an avid rail user who earned the name “Amtrak Joe” as a senator — launched into a touching tale about hitting the milestone in his “fourth or fifth year as vice president” as he traveled home.

“When I became vice president, one of the Capitol Hill newspapers estimated that I had taken more than 7,000 round trips on Amtrak over my career. I think that’s an exaggeration. I’m going to rely on those two conductors … one of them was a guy named Angelo Negri,” Biden began, according to Fox News.

“My mom was sick and I used to try to come home almost every weekend as vice president to see her. I got on the train and Angelo Negri came up and he goes, ‘Joey, baby,’ and he grabbed my cheek like he always did,” Biden steamed ahead.

However, Biden’s emotive story doesn’t quite add up, with skeptics quickly poking holes in the commander-in-chief’s long-winded account.

Fox News noted that he entered the fourth year of his vice presidency around 2013 — 20 years after Negri’s obit said he had retired from Amtrak in 1993, when Biden would have been in the Senate.

So, it was obvious during the election that Biden wasn't mentally sharp, and couldn't be coherent.... he got elected anyway, mostly due to the lack of someone more appealing to voters, and that the Democrats used the gender and minority tactic (aka, race card) to get enough votes to trump the incumbent (yes, that was on purpose for a laugh) and I think this makes it clear that any excuse during the 3election about sleep deprived due to the campaign trail were smoke and mirrors, and Biden is non compos mentis, and I expect that we'll see him evicted from office and replaced by the VP.

And that's how fast she'll be president, and I bet, she already knew that.

And I'm not going t have a politics debate in the comment section, this isn't what president is the most lucid, most insane, best liar, worst haircut, or least intelligent. This post is that Biden is a train happy guy who doesn't remember taking the train and talking to an usher when heading to see his mom.

So, get ready for his replacement, soon.

But don't bother commenting how Trump this or that. I don't care unless you're going to entertain me with a train, plane, car, truck, or motorcycle... you oughta know that.

If it upsets you that I'm not here to listen to you, then send me the link to your blog, and I'll read everything you want to say, fair enough? After all, you're here to see what goofball shit I have to say.

Labels: news, President of the USA