LaGuardia airport, a lot of history for a miserable airport 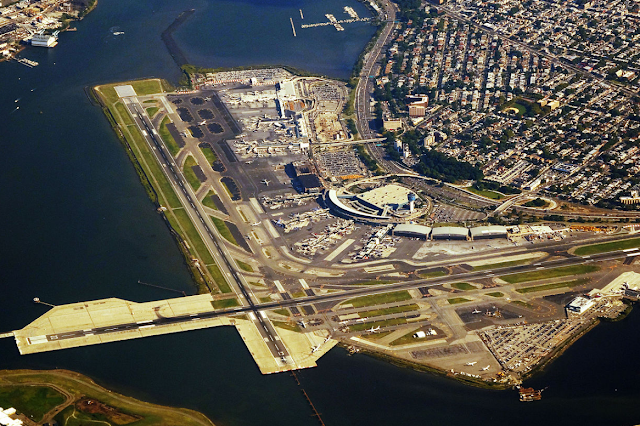 Among pilots, it is referred to as "USS LaGuardia", because the runways are short and surrounded by water, thus giving the feel of landing on an aircraft carrier.

LaGuardia has been extensively criticized for its outdated facilities, lack of cleanliness, cramped building design, poor customer service and has been ranked in numerous customer surveys as the worst in the United States.

The site of the airport was originally used by the Gala Amusement Park, owned by the Steinway family.
It was razed and transformed in 1929 into a 105-acre private flying field

The initiative to develop the airport for commercial flights began with an outburst by New York mayor  La Guardia upon the arrival of his TWA flight at Newark Airport – the only commercial airport serving the New York City region at the time – as his ticket said "New York".

He demanded to be taken to New York, and ordered the plane to be flown to Brooklyn's Floyd Bennett Field, this was a marketing and publicity stunt, but it proved a point.

He was making a splashy news event to urge New Yorkers to support a new airport within their city.

American Airlines accepted LaGuardia's offer to start a trial program of scheduled flights to Floyd Bennett, although the program failed after several months because Newark's airport was closer to Manhattan.

La Guardia went as far as to offer police escorts to airport limousines in an attempt to get American Airlines to continue operating the trial program.