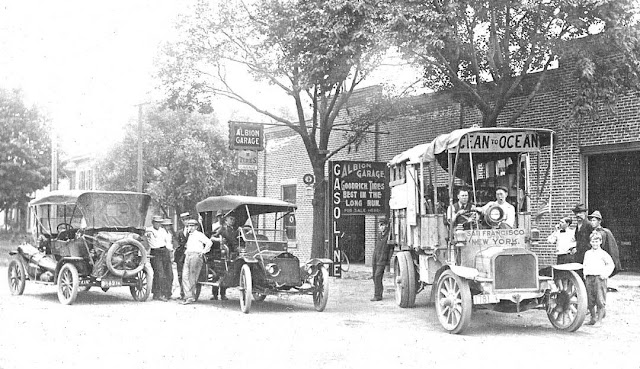 This run by the truck started early in March of 1911 and traveled west from Denver to Los Angeles, and then North to San Francisco. From there it was shipped by rail to Pueblo, CO and on June 12, 1911, it then headed east to New York and arrived there a month and a half later on August 2nd.

The truck was built in the US at the Saurer Motor Truck Company factory in Plainfield, NJ that merged with the Mack Brothers Car Company later in 1911.

Today’s enlargeable photo shows a stop on the eastbound Saurer truck trip to New York in Albion, MI at the Albion Garage for a promotional photo. The Service Station sold Goodrich tires and sold the Flanders car, one of which is parked to the left of the truck. The second car is a tourist’s Model “T” Ford touring car.