the Hetch Hetchy & Yosemite Valley Railroad, started in 1898, eventually became the West Side Lumber Company RR, and outlived all others to be the last narrow gauge logging railroad still operating in the American west, and was then bought by Glenn Bell, of Taco Bell 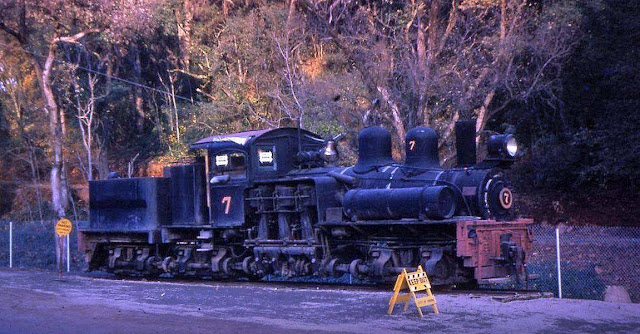 In October, 1960 when the West Side Lumber Co. of Tuolumne, California ran it's last steam powered log trains, the narrow gauge railroad was being replaced with new logging trucks. The railroad simply ceased operations. Only 2 clean-up runs were made in June, 1961 and after that the Tuolumne rail yards were home to rows of silent Shay Locomotives.

In 1960, West Side's new owner, Pickering Lumber Corp. donated an aging 2-truck Heisler for display in Tuolumne's town park. When 1964 rolled around Pickering was convinced that the log trucks could be trusted to permanently replace the logging railroad.

In the spring of 1964 Pickering picked out one of the Shays in the Tuolumne deadline and trucked her to near-by Sonora for display at the entrance to the County fairgrounds. As you can see here, they chose 3-truck Shay #7 for this honor. #7 had not run since the end of the logging season in 1958 when Camp 45 was shut down and the reload moved closer to town.

He purchased #7 from the town of Sonora and returned her to operation back in the mill yards where she had once worked. When the WS and CV closed in the early 1980's #7 was purchased by the Roaring Camp and Big Trees RR out of Felton, California where she continues in service to this day along side former West Side Heisler #3. 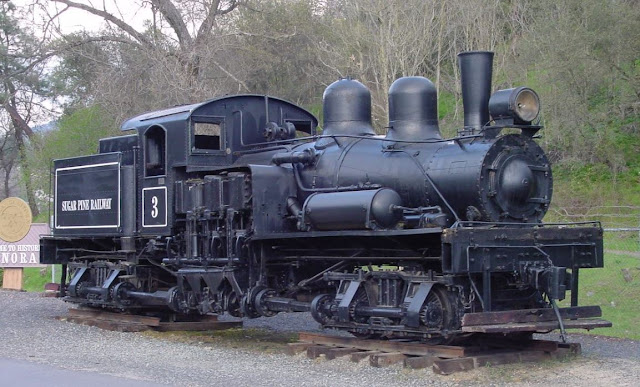 Glenn Bell started the tourist railroad operation, and sold it after about three years because the numbers simply didn’t add up, and the WS and CVRR was forced to close its doors in the early 1980s.