the oldest vehicle repair shop in the USA? Probably. The Fitzpatrick Brothers in Dorchester/Boston Massachusetts still located on the same spot since 1894 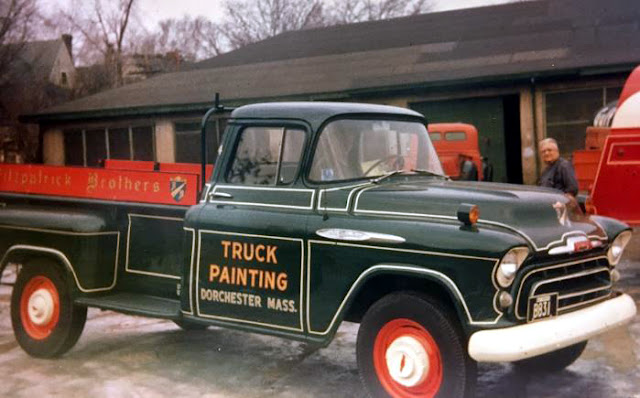 Founded in 1894 by Thomas and Martin Fitzpatrick.

In 1919, and in 1929 their sons joined, and then the grandsons Harry and Frank, began in 1954 and 1956 respectively. Finally, greatgrandson  Neale began working full time for the company in the late 1980s.

They transitioned from a horse-drawn wagon repair shop working long hours and instead of body techs they had blacksmiths, wheelwrights and carpenters back then, to a technically advanced collision repair center in 1926, when they became the first auto body repair shop to use spray guns, and they stopped using a paint brush. They are now Mon - Fri, 630am to 330pm

When they celebrated the business' 100th year on September 8, 1994, the Fitzpatricks mailed over 1,000 thank-you cards to all the names accumulated in their database, which was only 6 years old, no one had thought to keep track of the customers for the first 100 years.

To put some perspective on how long Fitzpatrick Brothers has been in business, in 1894 the sport of basketball was only three years old, Dwight Eisenhower was four, the camera was six, the Statue of Liberty was eight, Einstein was 15, and Grover Cleveland was president then.

How did they survive the great depression?  From 1931 to 1937, that generation of Fitzpatricks stayed afloat through a community bartering effort. Cash was almost non-existent, weekly salaries averaged $5, and if you could sweep the floor for a quarter you were doing pretty well for yourself. If they needed groceries, they repaired the grocer's truck. Need some hardware supplies? Surely the store owner was in need of a paint job. When the electrician needed some work done on his car, he'd offer to rewire your building.

It wasn't until the '50s that the business would see its most significant transformation since gasoline. No longer would insurance companies simply acknowledge a claim and send a check. They wanted to see the work now. "The business became really tough," said Franny. "Insurance companies began insisting on negotiating. You had to deal with an agent and present him with your bill. And those were days when $200 and $300 jobs were major operations."

In order to streamline their appraisal and billing process, they purchased a $4,500 computer from Radio Shack in 1979 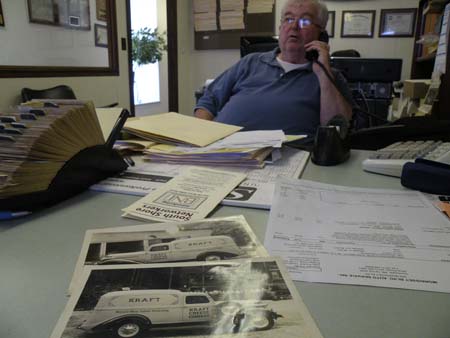 What made a difference, the brothers say, is that nobody in the family was ever mandated to work for the family business. Harry and Franny's father and uncle never asked them to give up their accounting and radio engineering degrees respectively. They chose the family business like their father and his brother. Harry's two sons, Neale and Scott, have continued the tradition. "It's funny how things work out," Franny philosophized. "We have always had two Fitzpatrick brothers running the business with two more stepping in. We have all wanted to be a part of this. In this day and age when families are falling apart, it's nice to see this kind of longevity." 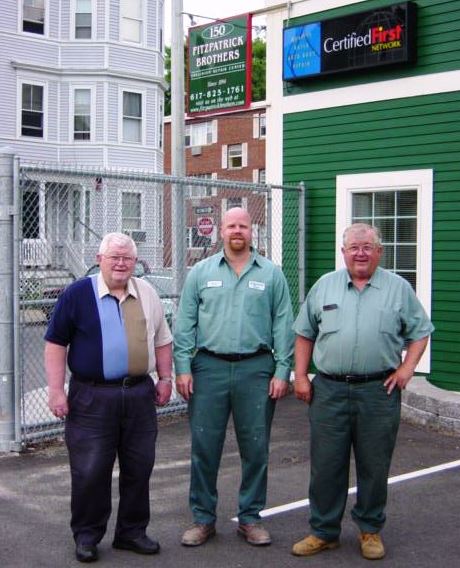 “It wouldn’t have worked the same way anywhere else, we’re probably the only body shop in the whole world surrounded by residential houses,” Fitzpatrick said. “And 90 percent of those houses are out customers, even when someone gets married and moves to Milton or Quincy, they tell their kids to come by the shop to get work done.”

Fitzpatrick said that while he appreciates his business’ history, his real pride comes from what lays ahead.  “It’s a funny thing, but we’ve been here now for more than 100 years. You won’t become a millionaire doing this kind of work, but it’s satisfying knowing you’re doing the same work as your father, as your grandfather. You know it’s the work you can keep on doing.”

You know how companies like bars seem to have a tradition of framing the first dollar earned for good luck? Don't you wish this company had an 1894 dollar of some type, bank note, silver dollar, whatever... framed? I think that would be awesome, don't you?