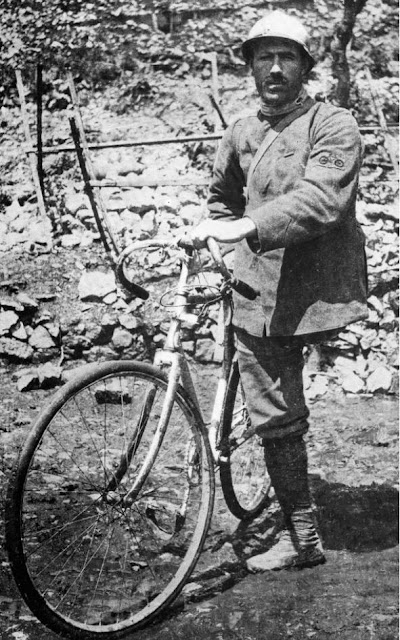 Enrico lost his left leg while working for Italian railways, at the age of 24. After his injury he became a cyclist.

In 1911, riding on a bicycle with one leg, he cycled to Paris, and then through Belgium, the Netherlands and Denmark, up to Finland and Lapland. From there, via Russia and Poland, he returned to Italy in June 1912.

In January 1913 Toti started cycling again, this time in Egypt; from Alexandria, he reached the border with Sudan where the English authorities, considering the trail too dangerous, ordered him to end the journey, and sent him to Cairo where he came back to Italy.

When war broke out between Italy and the Austrian Empire, Toti tried to volunteer for the Italian army but was not accepted due to his injury. Undaunted, he reached the frontline with his bicycle and managed to serve as an unpaid, unregistered, fully non-regulation "civilian volunteer" attached to several units. Forced to leave the combat zone and return home by the Carabinieri (Military Police), Toti stubbornly returned to the front and finally managed to join (still unofficially) the 3rd Bersaglieri Bicycle Battalion.

Fatally wounded in a clash in the Sixth Battle of the Isonzo, he hurled his crutch at the enemy. He was posthumously awarded the Gold Medal of Military Valor (Italy's highest award for valour), one of the relatively few civilians to have this honour bestowed on them.