1931 Maserati, a pre-war record-breaker once owned by the Popes physician, who raced it in secret 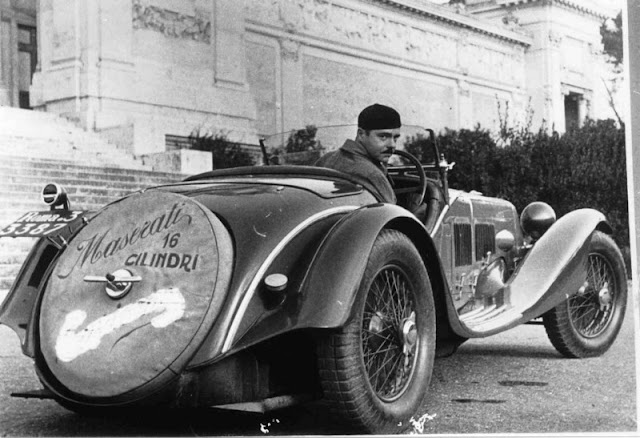 Where the idea of a 16-cylinder powerplant originated is unknown, but Alfieri Maserati had always proved himself to be a smart and resourceful engineer. Rather than building a completely new engine, he hatched the idea of pairing two of his biggest Tipo 26 2-litre straight-eights in order to make Maserati cars faster and higher profile to sell more cars.

Conscious of the problems that afflicted other manufacturers that tried this - Bugatti in Europe and Miller in America - Alfieri knew that he had to keep it as simple as possible. In June 1928, the first drawings were completed. The two 2-litre blocks were each mounted at 12.5° on a common crankcase in which the two individual crankshafts rotated clockwise. They drove a central power take-off that worked anti-clockwise. This dictated that the crown-wheel and pinion had to be mounted the opposite way to normal. The daunting assembly featured 3500 individual components including two Rootes superchargers, four oil pumps, two water pumps, 32 valves, 64 valve springs, 55 ball races and 29 gears. Horsepower was 305.

In August 1929, less than 14 months after the first drawings, the V4 16-cylinder began testing at Monza with a 2-seater body, just days before its debut at the Italian Grand Prix. Even weighing 2250lb, the racer proved rocket-fast, with Alfieri finishing a close second to August Momberger’s Mercedes-Benz SSK in the first race. He retired in the final after setting a record lap of 124mph that remained unbeaten until 1954.

The car was sold in November 1933 to Dr Riccardo Galeazzi Lisi, who in 1939 would become the physician to Pope Pius XII. Due to his profession, Galeazzi not surprisingly kept his passion for fast cars a secret and, together with his other racing cars, the V4 was hidden in a special garage in Civitavecchia. When competing, he used the pseudonym ‘Maometto’ - the Italian translation for Mohammed. Galeazzi’s secret was not very well kept and by December Auto Italiana magazine had reported his purchase of the fearsome machine.

The incredible Maserati sports car remained in the Rome area, where it changed hands several times until, in 1940, it ended up as stock with racing driver Felice Bonetto. A deal was done with Erick Verkade, an amateur Dutch racing driver, and amazingly Tizio Nuvolari was employed to deliver the car to Brussels. Due to a lack of paperwork, the famous Mantuan ace was briefly imprisoned at the Belgian border. Verkade finally secured the V4 in September 1940 (some reports claim he discovered it in a scrapyard in Brussels), but he decided to dismantle and hide the tempting machine from the German occupying forces. The engine was apparently stored in his bedroom.

The V4 Zagato made its public debut at Pebble Beach in 2003, and has rightfully been a key part of Alaserati s centenary celebrations, with appearances at Villa d’Este and Alaserati 100 at Aluseo Casa Enzo Ferrari.