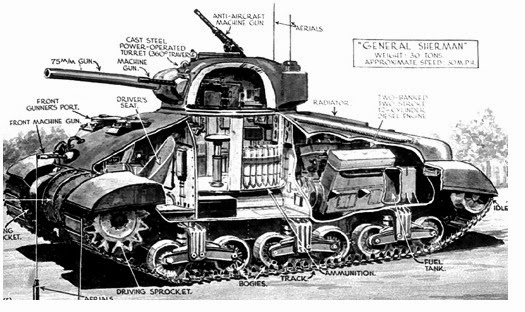 Hitler's capability to conquer Europe was discounted by the experts of the day at least partly because Germany had virtually no oil deposits. It was thought that merely cutting his oil imports would starve any serious war effort. Those experts either didn't know of, or discounted the potential of turning Germany's vast coal reserves into liquid fuel, the synthetic fuel that powered Germany's motorized Army, panzer divisions, and the Luftwaffe.

In the 1920s two German scientists named Frans Fischer and Hans Tropsch developed a process (the Fischer-Tropsch Method) of processing coal to produce a liquid hydrocarbon fuel by reacting the carbon monoxide, carbon dioxide, and methane obtained from coal. The product was refined to create a synthetic fuel.

In WWII, it was not unusual for German tanks to drive or be towed to the battlefield powered by flammable gas made from wood. At the battlefield the tanks would be converted to burn synthetic fuel in battle. The tide of war turned against Germany when the synthetic fuel plants were bombed and fuel production stopped. In 1944 General George Patton was speeding across Germany with the objective of being the first Allied force to reach Berlin. His forces outpaced his supply lines and his progress stopped. Patton ordered that synthetic fuel be drained from captured or abandoned German vehicles, and some of Patton's Sherman tanks and personnel carries were converted to run on synthetic fuel.

Found on http://patentpending.blogs.com/patent_pending_blog/automobile/page/3/
at Monday, March 10, 2014